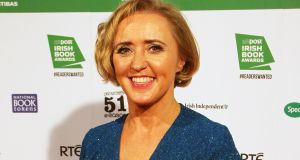 ‘What a terrific storyteller Liz Nugent (above) is! Photograph Phillip Massey/Getty

“All three of the Drumm brothers were at the funeral, although one of us was in a coffin.” Liz Nugent’s new novel, Our Little Cruelties (Penguin, £13.99) tells the story of how they got there: sleazy, abusive film producer Will, troubled, addictive rock star Luke, and stingy, manipulative talent agent Brian. Maybe they never had a chance, with a mother like former showband chanteuse and TV soap star Melissa Craig (the first Melissa in Ireland, one of her sons reckons: she changed it from Moll when she went into showbusiness and married up). A towering narcissist who can’t even fake love for her youngest son, she is a magnificently monstrous presence in the novel, and a valuable new acquisition for Nugent’s Gallery of Bad Mothers.

Each of the brothers takes a turn at narration, ranging back and forth from their 70s childhoods to the recent past; the effect feels like table hopping at a dysfunctional family funeral. “The awful thing in life is, everyone has their reasons,” Jean Renoir’s great line from The Rules of the Game, could serve as an epigraph to the book. Vulnerable, unstable Luke’s rise to stardom via early gigs at the Baggot Inn and the Olympia is superbly done; Will’s drive and charm are as persuasive as his reflexive sexism and predatory behaviour are disturbing; Brian’s middle-child victimhood breeds a meanness that mutates into blithely entitled extortion. It all adds up to a bleak domestic saga studded with set-piece events that mark social history milestones of the last 50 years, from the Pope’s visit, at which Melissa sings Ave Maria, through Bob Dylan’s concert at Slane, the scene of much turbulence, culminating in the marriage equality referendum, where granddaughter Daisy’s anthemic song rounds out the decades with (false) hope.

1 Covid-19: Pressure over breakdown in tracing system intensifies as State enters Level 5
2 One hundred Irish retailers for all your online Christmas shopping
3 Life under Level 5: Where can I go, who can I see, what is closed?
4 Thousands of gardaí mount checkpoints and patrol parks, beauty spots
5 Developer’s impeccably restored Fitzwilliam Square Georgian for €3.5m
6 Should women erase men from their lives? This writer thinks so
7 Nearly 400 Brazilians have tested positive for Covid-19 in Ireland, data shows
8 How long can Government afford to keep State pension age at 66?
9 Miriam Lord: All test and no trace makes Jack a very ill boy
10 Suzanne Lynch’s US Election Diary: Trump ready to go on the attack over Biden's son in final debate
11 Gym owner plans to defy restrictions and open
12 Lockdown meals: 50 great Irish restaurant food boxes to go
13 Newton Emerson: The Border is not the reason there cannot be a zero-Covid policy
14 Shock at golf clubs as sport faces shutdown in Level 5
15 Philip Reid: Hard to find the sense in closing golf clubs
16 Andy Farrell reshuffles his hand for rescheduled Italy game
17 Des Bishop apologises to Traveller community for comments in interview
18 US election: Trump voters are energised in North Carolina but the state is on a knife-edge
19 Golf clubs must close under Level 5 Covid-19 restrictions
20 Gadgets to help keep your home safer this winter
21 How robotic technology can mimic repetitive business tasks
22 Tennis clubs to remain open in Level 5 until ‘further clarification’ is provided
23 Black Friday has become Black November for Irish retailers
24 No doctor, no pharmacy, no supermarket: I’m moving to an island
25 Call for financial support for west Kerry if Fungie does not return
26 Traffic light system for Covid detection to operate at Irish airports in November
27 Suzanne Lynch’s US Election Diary: Trump ‘walks out’ of TV interview at White House
28 Supermarkets gear up for winter lockdown
29 China’s scaled-up climate targets send ‘a pointed message to US’
30 Varadkar: Move to Level 5 is ‘our one last best shot’
31 Why work more than 15 hours a week?
32 Much of what we think about Covid-19 is wrong. We need to change the conversation
33 Brexit: UK and EU agree to intensify talks in rush for deal
34 Brexit: UK government suffers heavy defeat over ‘law-breaking’ Bill in House of Lords
35 Welcome to Level Five: what does it all mean?
36 Covid-19 laws: What can gardaí enforce and what penalties can be given?
37 Micheál Martin to seek suggestions for projects under €500m ‘shared island’ fund
38 A further three deaths and 1,167 new Covid-19 cases reported in the Republic
39 Six Nations - Ireland v Italy: Kick-off time, TV details, team news, standings and more
40 Flooding in Cork city: ‘It’s the same old story’
Real news has value SUBSCRIBE