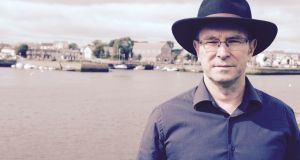 Mike McCormack: the Galway-based author’s first novel in 11 years has won the Irish novel of the year award a week after winning the £10,000 Goldsmiths Prize

Solar Bones by Mike McCormack, a novel constructed from a single sentence, has won the Novel of the Year prize at the 2016 Bord Gáis Energy Irish Book Awards .

Last week, the Galway-based author’s first novel in 11 years won the £10,000 Goldsmiths Prize in London, which he described as “payback” for his small Dublin-based publisher Tramp Press and his agent who had backed him during his “long and difficult adventure” as a writer.

Set in rural Co Mayo, Solar Bones is the story of a dead man returning home on All Souls Day to look back over his life. As last month’s Irish Times Book Club selection, it drew critical praise from fellow writers Claire Kilroy, Colin Barrett, Sara Baume, John Kelly and Mia Gallagher. Rob Doyle, in a review in The Irish Times, wrote that McCormack’s visionary intensity is not only convincing but spellbinding.

Marian Keyes, Graham Norton, Paul O’Connell and Tana French were also among the winning authors announced in Dublin on Wednesday.

In Glasnevin by Jane Clarke, first published in The Irish Times, won the inaugural Irish Poem of the Year award.

More than 45,000 readers voted to select the winners in each category. The public can vote for their overall Book of the Year at bgeirishbookawards.ie until December 9th. Previous winners include Louise O’ Neill for Asking for It, Mary Costello for Academy St, Donal Ryan for The Spinning Heart, Michael Harding for Staring at Lakes and Belinda McKeon for Solace.

Interviews with the winners, along with highlights from the awards ceremony, will be broadcast on RTÉ One on Saturday, 19th November at 11.15pm.

Commenting on this year’s winners, Larry MacHale, Bord Gáis Energy Irish Book Awards chairperson, said: “I would like to extend my heartfelt congratulations to all of this year’s winning authors. The Bord Gáis Energy Irish Book Awards was founded to celebrate and promote Irish writing to the widest range of readers possible. Each year it brings together a huge community passionate about books – readers, authors, booksellers, publishers and librarians – to recognise and celebrate the very best Irish writing talent.”

Dave Kirwan, managing director at Bord Gáis Energy, added: “The Bord Gáis Energy Irish Books Awards is a fantastic celebration of writing. I’d like to congratulate the winning authors and wish them every success in the future. I also look forward to the reveal of overall Book of the Year next month and encourage the public to get behind their favourite authors in what will be a tough competition.”

Newcomer of the Year: Red Dirt by EM Reapy (Head of Zeus)

Non-Fiction Book of the Year: I Read The News Today, Oh Boy by Paul Howard (Picador)

Cookbook of the Year: The World of The Happy Pear by Stephen and David Flynn (Penguin Ireland)

Popular Non-Fiction Book of the Year: Making It Up As I Go Along by Marian Keyes (Michael Joseph)

Sports Book of the Year: The Battle by Paul O’Connell (Penguin Ireland)

Crime Fiction Book of the Year: The Trespasser by Tana French (Hachette Ireland)

Short Story of the Year: The Visit by Orla McAlinden (Sowilo Press)

Irish Poem of the Year: In Glasnevin by Jane Clarke (From The Irish Times)