Books in brief: From Irish-style divorce to words that oppress women

Plus: The ravages of terminal illness, and Charlotte Levin’s novel about toxic love 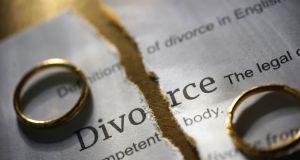 How Ireland differed legally from the rest of the UK on divorce is explained. Photograph: iStock

Diane Urquhart
Cambridge University Press, £22.99
Divorce was rare in western Europe until the late 19th century and a purview mainly of the wealthy. This study traces divorce in Ireland from the 17th to the 20th century, seeking to put personal experience rather than parliamentary or legal aspects centre stage. Themes such as changing attitudes to spousal behaviour and marital cruelty are explored, as well as evolving views on property and propriety. How Ireland differed legally from the rest of the UK is explained, and Urquhart regards the timing of the famous Parnell case as having “torpedoed reform”. Legal differences on the island after partition and between Northern Ireland and Britain are detailed, and the slow path to reform from the 1960s to the 1990s is traced in this balanced and masterful treatment of complex issues. Brian Maye

To Love a Dog

Tom Inglis
Penguin Ireland, €14.99
Bravo Tom Inglis. It takes a lot of self-belief to write a book about dogs when hundreds, possibly thousands, are already in print. He takes us delightfully through his 18 years with wheaten terrier Pepe until, “racked with guilt”, he has to have him put down. But the author is not altogether blinded by affection. There is, he argues, a huge chasm between the way humans and dogs see and understand the world. Harry S Truman opined if you want a friend for life, get a dog. Inglis is less certain – he sees Pepe and himself less best friends, more good companions. After all, he claims, Nazis loved dogs. Perhaps surprisingly, 94 per cent of Irish owners see their dog as members of the family and, equally surprising, we also keep more dogs than cats. Inglis takes us through his family life in Dublin, the unbearable effects of his wife’s tragic death, his moving to the back-of-beyond in Roscommon and how Pepe was always there, wagging his tale and always happy to see him. Owen Dawson

The Heavens Are All Blue

Finbar Lennon and Kate McGarry
Hachette, £13.99
Kate McGarry, a consultant physician, was diagnosed with advanced cancer of unknown origin in 2016 and, in the final year of her life, kept a diary with a view to publishing a book that she hoped would help people coping with terminal cancer. Her husband, Finbar Lennon, a consultant general surgeon, brought the project to fruition. It’s the story of a loving relationship (“the well-worn phrase ‘I love you’ never lost its meaning for us”), of how both of them coped with the shocking diagnosis and the loneliness, uncertainty and physical and psychological suffering involved. Lennon writes clearly and well, and manages to evoke many emotions. McGarry emerges as a woman who faced her own mortality with strength, courage, fortitude and even wry humour at times. Brian Maye

Ayad Akhtar
Tinder Press, £18.99
Pulitzer prize winner Ayad Akhtar knits together fact and fiction in his new book Homeland Elegies, a story of a Pakistani-origin family living in the US. Ayad, the protagonist of the story, is a first-generation Muslim son of a father so desperate to be American that he idolises Trump. His mother, on the contrary, has never felt at home and does not understand the hype of the great American Dream. Ayad presents a fiery indictment of the US’s “tumescent self-regard” and its deteriorating social fabric. While a penetrating look at a state coming apart at the seams after the events of 9/11, the narrative is bogged down by protracted political diatribes and disconnected substories. It ends up reading more like a collection of discursive essays on the ills of the US and Pakistan rather than illuminating autofiction. Rabeea Saleem

Edited by Lizzie Skurnick
Seal, €20
Language does many things. It allows us to communicate, it helps us to think, it empowers us to express ourselves. But language can also enslave. It can damage. It can undo and negate. Language can put people into cages. And words are the lock on the door. Skurnick has edited the column That Should Be a Word for the New York Times magazine for years. As a journalist who knows the power of words, she had edited a collection in which a group of passionate and articulate female writers tackle 27 different words used to put women into cages, real or imaginary. Meg Wolitzer tackles “Funny”, while Dahlia Lithwick takes on “Shrill”. Each individual essay systemically dismantles the language that has oppressed women for generations, each writer pushing that same language to its ideological limits in an attempt to articulate what it means to be a woman in the world today. Compelling, intelligent and essential reading. Becky Long

If I Can’t Have You

Charlotte Levin
Mantle, £14.99
Constance Little, emotionally damaged and struggling to cope with just about everything, begins an intense yet brief affair with the handsome doctor at the private medical practice where she works. So far, so familiar. But it’s the aftermath of the inevitable end of this love affair that catches the discerning reader’s attention in this debut novel from Charlotte Levin. As Constance spirals from love and connection to obsession and destruction, the narrative provides a relentless and darkly humorous vantage point for what feels like unavoidable tragedy. This is not an easy read. Levin tackles the idea of obsession head on, creating an intense and disturbing story that attempts to look right into the heart of loneliness. A dark and intelligent exploration of the point at which our human desire for love turns toxic and destructive. Becky Long