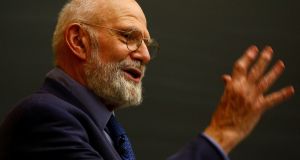 Everything in its Place
Oliver Sacks
Picador, £9.99
This posthumous collection (Sacks died in 2015) comprises essays that have already appeared elsewhere and a handful unpublished until now. It never reaches the sparkling heights of his previous work, and the writing now making it into print has an unfinished feel (Life Continues, though, is an exceptional piece to sign off any book, or life for that matter). A reader never leaves Sacks’s company unrewarded, all the same. His sentences feel like brainwaves, unsurprising for a neurologist perhaps, which fires your imagination and curiosity on the likes of Hungarian author Frigyes Karinthy or the Flemish town Geel. Sacks has been criticised, harshly, as “the man who mistook his patients for a literary career”. Life is material, though, and there’s plenty of both here. One for completists. NJ McGARRIGLE

Women in the Irish Film Industry: Stories and Storytellers
Edited by Susan Liddy
Cork University Press,€39
As a nation, we Irish have been renowned for centuries and generations as storytellers, weavers of tales and purveyors of myths and legends. In modern times, the creative communities of any country should focus on the stories that affect and represent the individuals of that nation. Susan Liddy’s edited collection of essays argues convincingly, across a variety of registers and perspectives, that women working in the Irish film industry are doing just that. Pleasingly, the overwhelming majority of the collection’s contributors are female, predominantly from academic backgrounds, exploring myriad topics from gender representations in Irish cinema to the role of education in achieving gender equality, to the art of documenting sexual violence. This is assured, interesting and curated with a coherent vision – an accessible text that offers genuine insight to an often inscrutable industry. BECKY LONG

The Organ Thieves
Chip Jones
Quercus, £18.99
This is “the shocking story of the first heart transplant in the US’s segregated south”. It traces the development of American anatomy, involving grave robbery where the number of African-American bodies stolen was hugely disproportionate, and the history of organ transplants and heart surgery leading to the race to transplant the first human heart. There was no formal research oversight. “It was a kind of medical Wild West, with no sheriff in town to keep order.” This was the context in which African-American labourer Bruce Tucker suffered a head injury, was taken to Medical College Virginia in Richmond, was pronounced dead and without his family’s knowledge or permission, his heart was transplanted into a white businessman. Both hospital and doctors were legally exonerated with no justice or compensation for his family. A horrific story superbly told. BRIAN MAYE