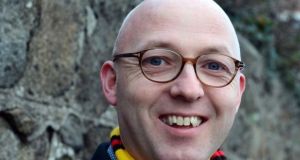 Leonard and Hungry Paul author Rónán Hession has been shortlisted for the Society of Authors’ McKitterick Prize, awarded for a first novel by a writer over 40. He faces stiff competition, however, for the £5,000 prize. Also shortlisted are Golden Child by Claire Adam; Diary of a Somebody by Brian Bilston; Fleishman is in Trouble by Taffy Brodesser-Akner; The Confessions of Frannie Langton by Sara Collins; and The Travelers by Regina Porter. Past winners include Helen Dunmore, Mark Haddon and Petina Gappah. The winners will be announced online on June 18th.

The shortlist for the Betty Trask Prize for a first novel by a writer under 35 features The Familiars by Stacey Hall; The Parisian by Isabella Hammad; Hitch by Kathryn Hind; and The Private Joys of Nnenna Maloney by Okechukwu Nzelu.

Saturday’s books pages
Coming up in The Irish Times this Saturday, author and scholar Barry McCrea argues that literature cannot cure illness or predict the future, but it can offer a great deal of psychological comfort in these times. Reviews include Fintan O’Toole On Humankind: A Hopeful History by Rutger Bregman; John Boyne on And Their Children After Them by Nicolas Mathieu; Brian Hanley On The Arms Crisis of 1970: The Plot that Never Was by Michael Heney; Bryce Evans on Coffeeland by Augustine Sedgewick; Paul Clements on the best new local history books; Amanda Bell on Dara McAnulty’s Diary of a Young Naturalist; Declan Hughes on the best new crime fiction; and Richard Pine on Making Integral: Critical Essays on Richard Murphy edited by Benjamin Keatinge.

BAIS book prize
The 2020 British Association of Irish Studies book prize whas been awarded to Maggie Scull for her book The Catholic Church and the Northern Ireland Troubles, 1968–1998 (OUP). Scull “uses the Troubles as a case study to evaluate the role of the Catholic Church in mediating conflict”. Her book was praised by the judges for being “a formidably impressive study backed up with extraordinary archival research and conceptual ambition”. Scull is a modern historian whose work explores religious institutions, secularisation, political violence, sectarianism, and peace, and currently teaches at Syracuse University, London. She was previously an IRC postdoctoral scholar at NUI Galway, Ireland.

Eleanor Lybeck’s All on Show: The Circus in Irish Literature from Joyce to Heaney(Cork UP) and Martin O’Donoghue’s The Legacy of the Irish Parliamentary Party in Independent Ireland, 1922–1949 (Liverpool UP) were highly commended by the judges.

During times of crisis, many find comfort in the arts, with poetry particularly helping us to express our feelings and connect with others. Adults and children, through their schools, can enter the competition. Poems in English or Irish are welcome in all six categories, with spoken word pieces actively encouraged as well as poems.

Past participants include Eileen Casey, David Mohan Angela T. Carr, Afric McGlinchey, Dairena Ní Chinnéide, Jane Clarke, Eleanor Hooker and Joseph Horgan. The attractive prizes on offer include for the adult categories: a choice of a two-week stay at the Tyrone Guthrie Centre, Annaghmakerrig, or a tablet or time in a recording studio to the value of €300 (for spoken word poets) plus a year’s subscription to Poetry Ireland Review.

This year, the competition explores the theme Standing Her Ground, inspired by the extraordinary stories of hard-working women who are holding their families together, battling enormous odds, including threats like violence, intimidation and drought, to provide food for their children and are battling to keep their children, and the earth, safe from harm. For more information and to enter, click here.

International Literature Festival Dublin podcasts
International Literature Festival Dublin has announced a new six-part podcast series of conversations with authors from around the globe, who were set to read at the festival in Dublin before the world went into lockdown. Portals will launch on May 18th when The New Yorker’s Moscow correspondent Joshua Yaffa lifts the lid on Putin’s Russia. Other episodes feature Fernanda Melchor, David Peace, Esther Safran Foer, Géraldine Schwarz and Rodaan Al Galidi.

Hosted by Caelainn Hogan, this series of short conversations gives a virtual taste of the festival and explores books that shed new light on moments of crisis and radical change. The podcast will be hosted on ILFDublin.com.

Pigott Poetry Prize
Pigeon Songs by Eoghan Walls, When the Tree Falls by Jane Clarke and What Planet by Miriam Gamble have been shortlisted for the 2020 Pigott Poetry Prize. This prize, in its 7th year, is Ireland’s largest prize for a poetry collection by an Irish poet, with the winner being awarded €10,000 and the two shortlisted finalists each receiving €1,000. More than 60 collections were submitted for this year’s award and adjudicator Ian McMillan had the task of selecting the shortlist of three on behalf of Listowel Writers’ Week. The overall winner of the prize will be announced on May 27th.

Irish Writers’ Archive at the Centre for Irish Studies
To mark the 20th anniversary of the establishment of the Centre for Irish Studies, it has begun sharing extracts from an archive series of readings and conversations with contemporary Irish writers recorded at NUI Galway over the past two decades. The Irish Writers’ Archive includes contributions from many of Ireland’s most accomplished writers, including John McGahern, Nuala Ní Dhomhnaill, Eugene McCabe, Dermot Healy, Moya Cannon, and Liam Ó Muirthile. Throughout May, it will provide glimpses of this wonderful archive beginning with selected pieces by Kerry Hardie and Paula Meehan.