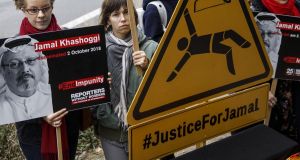 People commemorate the first anniversary of the murder of Saudi Arabian journalist Jamal Khashoggi by Saudi intelligence agents at the Turkish embassy in Istanbul. Saudi leader Mohammed bin Salman has rejected any responsibility for the murder. Photograph: Carsten Koall/Getty Images

For once, the publisher’s hype is true. Blood and Oil really is a riveting page-turner, a descent into a nest of vipers, a chilling profile of Saudi Crown Prince Mohammed bin Salman, known by his initials MBS.

MBS is the seventh child of King Salman bin Abdulaziz, but the first son from Salman’s second marriage. Salman felt estranged from his first six children after they were educated in Europe and the US, and resolved to keep his favourite son, Mohammed, by his side.

1 Covid-19: Seventy cases in Cork traced to local pubs and restaurants in recent weeks
2 Graham Norton: ‘I wanted out, out, out of Ireland’
3 Eighteen revelations from a trove of Trump tax records
4 Speed and distance Covid-19 droplets travel tracked by researchers in Mater hospital test
5 Olivia O’Leary: If you move to Carlow, there are things you’ll have to get used to
6 Hello Eir, is anybody there? Four unhappy customers complain
7 The Irish Times view on Donald Trump’s taxes: an overdue lifting of the veil
8 Three Ireland switches on 5G network around the country
9 ‘I never suspected that, aged 29, I’d be lost’
10 More than 30 people queue overnight to secure property in Carlow
11 Ken Early: Handball ‘crisis’ a timely distraction from the grim bigger picture
12 Susie Dent: ‘Jimmy Carr is incredibly rude to me. I took it as a compliment’
13 Bus Éireann to shut many inter-city routes due to financial pressures
14 Covid-19: Possible extra restrictions for four counties to be decided by weekend
15 Nurse who falsified prescriptions is struck off register by High Court
16 Donald Trump's taxes: US president paid $750 federal income tax the year he won the election
17 Am I paying too much for my buy-to-let mortgage?
18 Are you a non-lying cheat or just radically dishonest?
19 Ireland’s travel green list reduces to four countries
20 Liverpool maintain perfect start with win over Arsenal
21 Over 10,000 more people on pandemic unemployment payment in past week
22 Gardaí seeking to track movements of man (48) prior to unexplained death
23 Positive omens for Kenny ahead of Ireland’s Slovakia clash
24 There’s something grotesque about council’s plan to destroy historic horse yard for hotel
25 AfD fires spokesman who favours ‘shooting or gassing’ migrants
26 No joy for consumer with a faulty Husqvana chainsaw
27 Trump and Biden prepare to face off in first presidential debate
28 Donald Trump’s Irish and Scottish golf courses ‘reported losses of $63.6m’
29 Ex-minister Michael D’Arcy failed to alert ethics group on post
30 Shipman's motive may have been 'addiction to killing'
31 Dublin Halloween festival cancelled due to Covid-19
32 Large sections of Garda to be disarmed following review
33 City council to investigate Central Bank’s bird scaring device
34 Rankin: U2’s second-favourite photographer on his brushes with fame
35 Gardaí appeal for information on rape of teenager in Co Mayo playground
36 Gardaí want to talk to three males over alleged rape in Mayo
37 My cancer scare, the marathon and me
38 UCD professor asked to resign from EU committee over Covid-19 claims
39 Our neighbour is using his van as a shed on our shared parking space
40 UK refuses to back down over controversial Bill as crunch talks begin with EU
Real news has value SUBSCRIBE