‘The first thing I would say to any reader is not to reread, expecting to find the link you think you’ve missed – you just have to roll with it’ 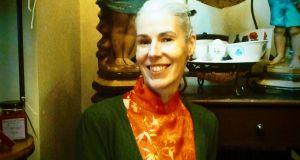 Mia Gallagher: I think she just genuinely wants the book to mean something unique to each of us. Photograph: Sean Molloy

I’ve always been a big fan of Mia’s sparkling and trippy short stories, which was why I jumped at the chance to interview her last year about her new novel for the Belfast Book Festival. However, when Keith Acheson, the director of the BBF, gave me a copy of Mia’s Beautiful Pictures of the Lost Homeland, I have to admit my first reaction was, “What have I got myself into?” The sheer size of it at 486 pages! I have a miniaturist’s brain and I only ever read collections of short stories, slim as myself.

As soon as I got back home, I made a start on it. After the first few chapters I realised that the book totally challenges literary form. Beautiful Pictures is no conventional door-stopper – it’s more of a portal-stopper; it’s no airport novel, it’s more a rocket launch pad novel! Everything about this book is surprising – there’s one character who is totally believable until we’re told she’s imaginary. In its scope, this book is indescribable.

The first thing I would say to any reader is not to reread, expecting to find the link you think you’ve missed – you just have to roll with it. The bomb that opens proceedings keeps blasting chaos through the whole story. Gallagher alerts us to the fact of her fly-kicking experimentalism by her mysterious references to rosary beads, portals and, most startlingly, the Wunderkammer, the cabinet of curiosities. We span time from the 1940s till now and from Czechoslovakia to Ireland; it’s written in third person, first person, audio letters, TV interviews, lognotes. We have love affairs, pregnancies, deaths, fights, bombings, ethnic cleansings – it’s exciting and epic.

The fascinating protagonist is Georgie Madden, who you only later come to realise is transgendered. The gender theme is no examination of modern sexual mores but rather another symbol of the wild wheels and turns of Gallagher’s multibinary world vision. The human story charts the fractured relationships between Georgie, her mother Aisling, her father David and her babysitter Lotte, but the narrative has no interest in easy resolutions. The sense of estrangement within Georgie’s background is intercut with Lotte’s own troubled family: her Sudeten German mother Anna and her twin Andreas. As well as the two families, there are two main timelines covering Georgie in the present day and her childhood growing up in Ireland in the ’70s.

One of the many delights of this book are the ironic lognotes, laced with even more humorously black footnotes, where Gallagher takes a potshot at academic, hig-faluting wordiness. In these sections, she compares the history of Czechoslovakia, with its brutal ethnic cleansings and rapes, to the history of Ireland. Georgie does some of her growing up in Northern Ireland and there is a strong terrorist theme throughout, where some characters are presented as victims, others as perpetrators. There is a constant notion that history keeps repeating itself as Georgie searches for “a gateway into that lost, irretrievable dimension, my own bloody past”.

As I’m a northerner myself, my favourite scenes are set in Co Down with Georgie’s grandfather who’s known in the family as “The Black Prod”. The local kids memorably terrify her with tales of the ghost of a dead, unchristened baby buried under a neighbouring barn. Buried secrets are a big theme.

The audacity of the structure almost overshadows the prose, but richness is still abundant in the shimmering half-lines: “A light glowing in her face as if a candle had been lit under her skin”. The writing scrupulously conveys the truth in the slow painful death of Georgie’s mother from cancer while also managing to transform it into something Gothically vibrant. The darkness that threatens to overwhelm is always uplifted by striking details. Every metaphor has significance and the reiteration sparks up wild flashes through your memory lobes. The sensuous smell of almonds that pervades so many scenes is redolent of the scent of explosives.

After this electric and disturbing read, I interviewed Mia, dying for her to unlock the essence of this book with some magic authorial key, but she flatly refused to explain her work. You could argue that, after 10 years of working on different elements of Beautiful Pictures of the Lost Homeland before pulling it all together, she finds it impossible to sum it up in a neat marketing logline, but I think she just genuinely wants the book to mean something unique to each of us. She honestly doesn’t give a toss what people say about her work. That, in my book, makes her the epitome of cool.

Rosemary Jenkinson’s short story, The Mural Painter, appears in The Glass Shore: Short Stories by Women Writers from the North of Ireland, edited by Sinéad Gleeson, and published by New Island Books. Her recent collection of short stories is Aphrodite’s Kiss by Whittrick Press. She is artist-in-residence at the Lyric, Belfast.