Book of the Day: Nicholson Baker digs up evidence of the American spy agency’s extremes 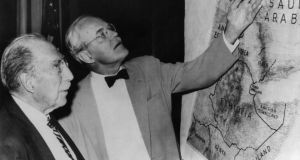 The annals of the CIA need little primping from the high-wire prose of Nicholson Baker. In Baseless, Baker documents his maddening, enlightening and ultimately inconclusive quest, wielding America’s largely toothless Freedom of Information Act, to wrest the truth from an obstructionist CIA about America’s use-or-not biological weaponry in the early 1950s.

Years elapse after Baker files requests for documents; when copies materialise, they’re ravaged by redactions that fillet them of meaning. Yet, picking over “potsherds” of text, he assembles an indelible portrait of institutional derangement.

20 Pfizer vaccine may be less effective in people with obesity

22 How Enter The Dragon became a martial arts phenomenon

23 Bill Gates: ‘I’m not trying to take anything away from Greta Thunberg, but...’

34 Out of the wasteland: the first World War and modernism