Granddaughter of a 1916 rebel, daughter of a historian, (and sister of a famous novelist), Bairbre Tóibín could have been born to write a novel about the Rising in Enniscorthy 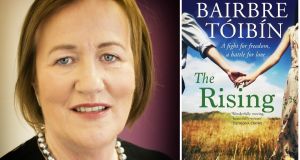 Bairbre Tóibín: The 1916 Rising became a strange legacy in my family over the years: public glory, but always the memory of private hardship and trauma. My relatives knew that what was subsequently presented as heroic had also been deeply disturbing for many people

I have known for as long as I can remember that my grandfather, who died before I was born, fought in the 1916 Rising. My novel The Rising is loosely based on his life, and on the life of my grandmother in the years leading up to 1916. The history and politics of the period are a backdrop to the story but, as a novelist, I was interested in the many aspects of the characters’ lives, and how history affected them, rather than how they may have affected history.

The novel is a love story, and a story about belonging to a family and a community in troubled times. It ends at December 1916, when Michael, who had been interned after the Rising, is released and arrives home in Enniscorthy in time for Christmas.

Every Christmas, when I was a child, my father told the story of how my grandfather was freed from Frongoch camp in Wales in 1916 and was back home just in time for celebrations. Crowds of people gathered in the railway station in Enniscorthy on Christmas Eve 1916 to greet the men who were so happy to be coming home. My father was only two years of age at the time, too young to be there, but my uncle and aunt were among the people at the station that day to welcome their father home. My father, my aunt and my uncle, who had been one of the Fianna boys helping out in 1916, were proud of the part their family had played in the Rising, and of the fact that Enniscorthy was the only place outside Dublin where there was a Rising. They would mention the Rising, but they never went into any great detail about what actually happened in 1916.

In The Plough and the Stars, Seán O’Casey shows us the 1916 Rising in Dublin in all its destructive splendour. The Rising in Enniscorthy was a much more modest affair, but significant nonetheless. To write my novel, and to find out the details my father’s family hadn’t told me, I read contemporary newspapers, and descriptions written by participants, and slowly imagined, and described what it was like for Michael, the character in my novel, to actually live through the experience of being involved in a Rising. I found it easy enough to understand after a while why my relatives hadn’t talked much about the detail of what happened. They knew that what was subsequently presented as heroic had also been deeply disturbing for many people.

On the Thursday morning of Easter week, a group of about 400 local people, members of the Irish Volunteers and Cumann na mBan, took over the town of Enniscorthy, and held it for four days. They blocked off the roads leading to the town, and cut the railway line, closing contact with the outside world. They shut down public houses, patrolled the streets and imposed a curfew to maintain order. There was shooting at the RIC barracks. They commandeered supplies, such as groceries, bedding and boots from shopkeepers. Many people in the town must have been angered, and afraid that the town would be bombarded by the British army, leading to destruction of property and loss of life. But the Rising in Enniscorthy ended with surrender, and no loss of life or destruction of property.

My father was a historian so he would tell what was in the public domain. Two men from Enniscorthy were brought to Dublin to get the order to surrender from Pearse. They were among the last people to see Pearse alive before the terrible executions began. But there the story-telling stopped, and I went to old newspapers to get the details, and I imagined what it was like to live through those events. The men, who were the breadwinners at the time, were rounded up and interned. We can imagine how publicly humiliating this was for them, and for their families. People who were against the Rising, and who were fearful and angry while it was going on, must have gloated, perhaps in coded ways, as the families suffered huge financial hardship.

A sense of camaraderie and bravado during the Rising, while going to shops to commandeer supplies, would have been replaced by embarrassment about meeting these shopkeepers, members of the same close-knit community, on the street, or at funerals, or GAA matches or at church. People have long memories. Those who had been afraid during the Rising would always be wary when they met anyone who had been out in 1916. And later, there was the grief visited on people during the War of Independence and the Civil War.

The 1916 Rising became a strange legacy in my family over the years: public glory, but always the memory of private hardship and trauma. In the novel, Michael’s family, Margaret and the children, suffer because of his involvement in revolution, and it is from Margaret, the other voice in the novel, that we hear of the waves of grief that come crashing down on people as, day after day, in May 1916 their beloved leaders are executed.

My aunt would smile as my father talked about her father coming home on Christmas Eve. But my uncle who went on, as a teenager, to fight in the War of Independence and the Civil War, and who was all his life deeply patriotic, would say nothing and look off in the distance, as if to keep the memory of that whole period as far away from him as possible.

They passed this complicated narrative on, and I wrote The Rising, a novel about ordinary people caught up in the extraordinary events which led to the birth of the State.

The Rising by Bairbre Tóibín is published today by Hachette Ireland, £8.99