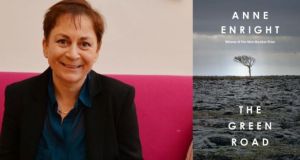 Anne Enright: the inaugural Laureate for Irish Fiction, has previously won the Novel of the Year award in 2008 for The Gathering, which also won the Man Booker Prize

The Green Road by Anne Enright, a family saga that spans 25 years and three continents, has been chosen as the Eason Book Club Novel of the Year at the Bord Gáis Energy Irish Book Awards 2015. Spill Simmer Falter Wither by Sara Baume was named the Sunday Independent Newcomer of the Year.

The two are no strangers to awards. Enright, the inaugural Laureate for Irish Fiction, has previously won in 2008 for The Gathering, which also won the Man Booker Prize. Both were shortlisted last week for Costa awards and they have each won the Davy Byrnes short story award. The Green Road was longlisted for the Man Booker Prize, while Baume has this year been awarded the Rooney Prize for Irish Literature and Hennessy New Irish Writer of the Year and was the readers’ nominee for the Guardian First Book Award.

Joe Duffy, Jim McGuinness, Louise O’Neill, Donal Ryan, Sinéad Gleeson and Niall Breslin were also among the winners at the ceremony, now in its 10th year, held in Dublin this evening. Irish-American novelist JP Donleavy was presented with the Bob Hughes Lifetime Achievement Award. Actor Johnny Depp, who is producing and reportedly starring in a film version of Donleavy’s 1955 novel, The Ginger Man, added his congratulations to his friend “Mike” Donleavy by video-link.

Asking For It by Louise O’Neill was voted Specsavers Children’s Book of the Year (Senior), while Imaginary Fred by Eoin Colfer and Oliver Jeffers won the junior prize. After the Fire by Jane Casey is Ireland AM Crime Book of the Year. The Long Gaze Back: An Anthology of Irish Women Writers edited by Sinéad Gleeson was voted TheJournal.ie Best Irish Published Book of the Year. The Way We Were by Sinead Moriarty is the Irish Independent Popular Fiction Book of the Year and A Slanting of the Sun by Donal Ryan is the Writing.ie Short Story of the Year.

Reviewing The Green Road in The Irish Times, Belinda McKeon, who was also shortlisted for her novel, Tender, wrote: “What Enright has done with this novel is fascinating. It is Irish, or rather Irish-novelly, in such an unashamed fashion – the Mammy, the home place, the emotionally banjaxed siblings, the booze and the boom and the pill and the pope – as to be provocative. It does not simply take on, but briskly and grinningly grabs hold of, all the stuff that, these days, seems too embarrassing to bring up at the dinner table of Irish fiction. Then it makes itself all about language anyway ... reminding us – as we need reminding all the more these days, it seems – that experiment is not a matter of category, but a matter of approach and of nuance.”

Joseph O’Connor, reviewing Baume’s debut in The Irish Times, wrote: “It’s hard to imagine a more exciting debut novel being published this year. Baume proves that the real can still be the province of literature, the only art form to which we can turn, heart in our hands, for an uplifting, consoling and dizzying reminder that language is the most sacred thing we’ve made.

“This book is a stunning and wonderful achievement by a writer touched by greatness. It is the most powerful debut novel I have read in several years. I don’t want to jinx it by saying which major literary prizes it deserves; suffice to say we’ll be hearing a lot more about this novel and its maker in the future.”

More than 45,000 readers voted to select the winners in each category. The public can vote until December 17th for their overall book of the year by going to www.bgeirishbookawards.ie. Previous winners include Mary Costello for Academy Street, Donal Ryan for The Spinning Heart, Michael Harding for Staring at Lakes and Belinda McKeon for Solace.

This year’s awards ceremony was presented by Keelin Shanley, Rick O’Shea and Sean Rocks. Highlights from the awards ceremony will be broadcast on RTÉ One on Saturday, November 28th at 11.15pm.

Brendan Corbett, Bord Gáis Energy Irish Book Awards chairman, said: “With these awards, one thing never changes and that is the seemingly limitless creativity of Irish writers. We know that every year we will be guaranteed fantastic books to choose from and that there will be great work from experienced writers and always fresh talent bursting through to challenge them as the list of winners shows. Irish literature really is the gift that keeps on giving. We congratulate all of this year’s winners and urge readers to support them this Christmas.”

Dave Kirwan, chief operating officer at Bord Gáis Energy, added: “This year, the Bord Gáis Energy Irish Book Awards has reached a significant milestone and we’re proud of our association with a campaign which celebrates and publicises the importance of books and reading to Ireland and Irish people. The standard of shortlisted authors is always impressive, with tough competition in each category. I’d like to congratulate the deserving winners and encourage the general public to get behind their favourite for the overall Book of the Year.”

The full list of winners in the Bord Gáis Energy Irish Book Awards 2015 are:

Asking For It by Louise O’ Neill (Quercus Books)

Avonmore Cookbook of the Year

Ireland AM Crime Book of the Year

After the Fire by Jane Casey (Ebury Press)

The Way We Were by Sinead Moriarty (Penguin Ireland)

Children of the Rising by Joe Duffy (Hachette Books Ireland)

Until Victory Always: A Memoir by Jim McGuinness (Gill & Macmillan)

Sunday Independent Newcomer of the Year

Books Are My Bag Popular Non-Fiction Book of the Year

Me and My Mate Jeffrey by Niall Breslin (Hachette Books Ireland)

Writing.ie Short Story of the Year