Alliance of Pirates: peaceful west Cork was once a notorious centre of piracy 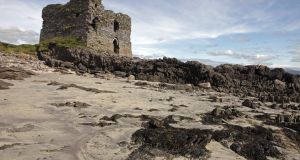 In the shorthand view of Irish history the Battle of Kinsale marks the collapse of Gaelic Ireland and the final assertion of English control over the whole country. The townspeople of Kinsale may have seen it rather differently: in the decade after the battle, west Cork achieved international notoriety as a centre of piracy and a safe haven for the disposal of stolen cargoes.

Such flagrant piracy was a measure of the feebleness of the Irish state. Over the next 20 years there was neither effective legal sanction nor adequate naval strength to disperse what became a veritable private flotilla.

1 ‘Insane’ gathering of hundreds of students in Galway condemned
2 Do headstands, clear out a junk drawer, have sex: 15 ways to re-energise your day
3 Prepare for six to nine months of Covid-19 restraints, warn health officials
4 Home of The O’Rahilly should not have been demolished, Taoiseach says
5 Paul Krugman: Trump’s Debt, His Future and Ours
6 Probate is changing: What does that mean for you?
7 Speed and distance of Covid-19 droplets tracked by Mater researchers
8 US election: Everything you need to know about Tuesday’s presidential debate
9 Sean Quinn stunned at rebranding of Quinn Industrial Holdings
10 H is for hero: the origin story of Jack Reacher, a billion-dollar brand
11 Coronavirus: Test-and-trace system could cost €700 million, says HSE chief Paul Reid
12 Taoiseach ‘not at all happy’ ex-minister took job in sector he was responsible for
13 Irish, German and Italian contact-tracing apps to be linked in bid for ‘safer’ travel
14 Graham Norton: ‘I wanted out, out, out of Ireland’
15 Fintan O’Toole: My father wanted to die and I promised to help him
16 Meet ‘friluftsliv’ – the new hygge for living outdoors
17 Yotam Ottolenghi: This crowd-pleasing pie feels like a big hug
18 Rise in cost of renting slows as impact of Covid-19 begins to hit
19 Google ups bid to clinch approval for $2.1bn Fitbit takeover
20 No joy for consumer with a faulty Husqvana chainsaw
21 North’s PPS upholds decision not to prosecute 15 British soldiers over Bloody Sunday
22 Olivia O’Leary: If you move to Carlow, there are things you’ll have to get used to
23 Will tracker mortgage be at risk if Ulster Bank closes?
24 Róisín Ingle: How to eat out in a pandemic. Don’t do what I did
25 Ireland’s travel green list reduces to four countries
26 Covid-19: Seventy cases in Cork traced to local pubs and restaurants in recent weeks
27 Susie Dent: ‘Jimmy Carr is incredibly rude to me. I took it as a compliment’
28 Three Ireland switches on 5G network around the country
29 ‘Therapy completely changed my life, once I gave it my all’
30 Attacks against women rise during lockdown as other crimes plummet
31 Jürgen Klopp and Roy Keane clash over ‘sloppy’ comment
32 Man’s death in prison after restraint by officers is investigated
33 ‘I never suspected that, aged 29, I’d be lost’
34 Stephen Kenny names Jack Byrne in Ireland squad for Slovakia play-off
35 Sipo legislation to be reviewed following Michael D’Arcy case, Taoiseach tells Dáil
36 Health staff told to wear masks when passing through busy hospital areas
37 Dublin Aerospace takes over Flybe’s aircraft servicing base at Exeter Airport
38 Liverpool crank up familiar brand of strangulation football
39 Rob Kearney signs one year deal with Western Force
40 Gerry Thornley: South African sides would be a welcome addition to Pro14
Real news has value SUBSCRIBE