Agency: a sci-fi thriller with no Brexit and Turkey as threat

After a tricky first half , William Gibson’s stylish prose makes for a feverish read 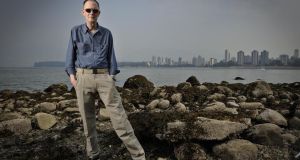 The publication of William Gibson’s latest novel, Agency, was delayed repeatedly, and has been accepted as a prequel to Gibson’s previous novel, The Peripheral, though readers unfamiliar with that earlier work will not find themselves inhibited. Both involve people in a future timeline creating new scenarios in the past, wreaking havoc, and the mission of law enforcement to stop the damage created.

Gibson’s novel is a sci-fi thriller split across an imagined, alternative present (2017), and a speculative, post-apocalyptic far-future (2136). The author is known for his prescience, and has been lauded as a sage. This novel’s attempt to depict the present times through the dark mirror of an imagined 2136 is a tough task, when the political situation we find ourselves in is evolving at such a rapid, irrational pace. Perhaps Gibson’s delaying of the novel is a reflection of this climate, and his difficulty in ascertaining enough clarity on it to fix it into a satisfying plot. Whatever the case may be, it is quite difficult to tell what we are supposed to think of his alternative 2017. Would the world have been better with Clinton as president? Was Brexit a mistake? We’re never fully sure, but the fact that the characters in 2017 find themselves on the brink of nuclear war stemming from a volatile political climate in Turkey suggests that, whatever happened, things were never to be easy.

1 All students will not return to school even if social distancing rules are relaxed – McHugh
2 We need to pay very close attention to what is happening in Britain now
3 What exactly will happen in phase two of easing restrictions?
4 Trump says, ‘I have the best words.’ Now this comedian’s going viral for lip-syncing them
5 What do you do when you meet a bear on a walk? Copy this 12-year-old
6 Dangerous student stalker sentenced to seven years in jail
7 Miriam Lord: Taoiseach is trapped in a Zoom session from hell
8 Trump announces clampdown on social media companies
9 The human cost of Covid-19: Ireland's care homes with the most deaths revealed
10 Miriam Lord: Reluctant Halligan bangs the nail on the head
11 Emily Maitlis thanks BBC viewers for support after Cummings row
12 Maria Bailey takes action against newspaper over ‘swing gate’ coverage
13 ‘Since coming out of lockdown I’ve been a mess, and I miss my children’
14 Starmer hits home with measured attacks on Tory pandemic record
15 Tax and the Pandemic Unemployment Payment: Your questions answered
16 Coronavirus: Further nine deaths reported along with 46 new cases
17 Charlie Chawke plans 290 apartments and hotel on Goat pub site
18 Thursday was hottest day of year so far with 26.8 degrees recorded in Roscommon
19 Church closes its doors after flouting public health rules
20 Brazilian gang held in Offaly had sub-machine gun and student visas
21 Girl (5) flown to hospital after lilo drifted mile offshore
22 Bake-off: Matt Damon bids farewell to bakery as he prepares to leave Ireland
23 New rules for arrivals to Ireland start today - what is changing?
24 The momentum behind calls to ease lockdown may become irresistible for politicians
25 Airport arrivals on quarantining: ‘Fourteen days for me is fine. There’s an end date’
26 Four things that could help Ireland escape from the Covid-19 recession
27 Cyril Fitzsimons obituary: A larger-than-life character who became a New York institution
28 Deadline for Leaving Cert registration for calculated grades extended to noon on Friday
29 Tempted by a weeknight barbecue? Here’s how the pros turbocharge their grilling
30 Supermac’s boss under fire over claim Covid-19 payment like ‘winning lotto’
31 ‘It would be such a shame if Ireland were to lose its beautiful native tongue’
32 What will €180,000 buy in Dublin and Co Tipperary?
33 Exam weather: Large crowds gather at Dublin swimming spots
34 Young Irish women the most depressed and lonely in Europe
35 Donald Trump has one last chance to ensure his re-election
36 Row over ownership of Fota Island resort comes before High Court
37 Britt Ekland: 'The Bond girl of my era exists no more'
38 Dublin Bus warns economy will not return to normal if two-metre rule continues
39 ‘We loved each other’: Anthony Fauci recalls Larry Kramer, friend and nemesis
40 EU and Japan reach out to patch together a fraying world order
Real news has value SUBSCRIBE