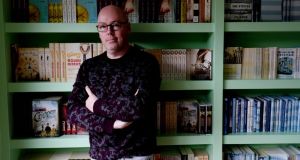 John Boyne: The best-selling author, speaking through his various conduits, has a serially unmusical voice in his new novel. Photograph: Alan Betson

John Boyne’s lively and overreaching new novel begins with King Herod’s Massacre of the Innocents and ends in the future. Its artist narrator lives the normal lifespan of a human, but over two millennia. Sometimes he paints boats in Egypt, embroiders in South Korea or writes novels from Scottish jails.

The perspective of A Traveller at the Gates of Wisdom shifts a few decades with each chapter, its story and most of the particulars being taken up in relay by a different man in a different country. But each has a violent older brother, a protective and jealous sister who would have made a great warrior had it not been for her gender, and a handsome, clever adopted cousin who will cause the narrator great pain and drive him to seek vengeance.

4 Fintan O’Toole: We had zero covid and we blew it

6 Spring clean: 13 ways to spruce up your home – with or without a tradesperson

8 David McWilliams: Why Ireland will recover faster than others

10 Covid-19: Self-isolation rules to be eased for healthcare workers

15 One-quarter of TDs are property investors or landowners

17 Covid-19 in Ireland: Stephen Donnelly, Paul Reid, Luke O’Neill on the key moments of year one

20 ‘We can’t just dump our rubbish in the gorden. It’s the Vico Road – there’ll be meetings’

21 Six Nations: Time for Ireland to deliver in style against Italy

22 Kate Winslet: ‘I shouldn’t have worked with Woody. I’ll always grapple with that regret’

24 Q&A: What are the new coronavirus variants and should we be worried?

25 Deaths of three brothers near Mitchelstown investigated by gardaí

28 Matt Williams: Offloading skill has been obliterated from this Ireland attack

29 Johnny Watterson: I do not buy the apology around paedophile John McClean

30 Blackrock cottage beside a babbling brook and parkland for €725k

32 Jennifer O’Connell: The Government doesn’t trust us and it’s mutual

33 This beauty tried to steal the cat’s dinner. Is it a buzzard? Readers’ nature queries