A Sabbatical in Leipzig: Slow, affecting and beautiful 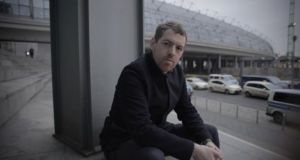 Adrian Duncan: There’s painstaking precision to the words and design of his second book, A Sabbatical in Leipzig.

I can’t get my head around Adrian Duncan’s A Sabbatical in Leipzig. Did I like it? It doesn’t feel like a text that has any interest in being liked. (It even opens with a Leaving Certificate exam question.) You move through this book, as though at a contemporary art exhibition. You’re confronted with a set of images. They’re complex and hard to understand. A vague sense of tedium prevails – you’d have more fun in the gift shop. Then, days later, there it is. That thing you thought was boring, or incomprehensible, has lodged in your mind. Whether or not you liked it doesn’t really matter. It is slow and affecting and really quite beautiful.

A visual artist and former engineer, Duncan brings a different way of seeing to the world of prose. As with his debut, Love Notes from a German Building Site, engineering is central to A Sabbatical in Leipzig. Our narrator is Michael, a retired bridge engineer, living in Bilbao after the death of his girlfriend, Catherine. His oddly calibrated mind guides us through. Each day, he listens to two versions of Schubert’s Trout Quintet (first movement), one from an “album of experimental symphonies”, the other “played by a traditional quintet”. It occurs to him that he should play both pieces of music simultaneously on two separate record players – an endeavour which gives a mild amount of forward propulsion to a narrative which, in truth, has no real truck with moving forward. More precise, perhaps, to say it moves in many directions, or it makes a pattern. Certain motifs (discs, electricity, porcelain, the bogland of his youth, etc) touch off each other, then bend away.

1 Minister for Agriculture Barry Cowen sacked by Taoiseach
2 Gardaí found naked man on a cross being whipped in Dublin club, court told
3 Coronavirus: Pub reopenings in danger as NPHET expresses serious concerns at case growth
4 David McWilliams: ‘Ireland is three decisions away from being a perfect country’
5 A US food writer moved to Ireland. Here’s what he found
6 Two in custody after Ryanair flight to Dublin forced to divert
7 Ryanair and Aer Lingus cut flights as travel restrictions continue
8 Taoiseach says Garda document on Cowen case ‘not quite as portrayed’
9 My aunt never told us that Gran passed away with no will
10 Many people identified as close contacts refusing to come forward for Covid-19 testing
11 Man (47) charged over damage to Luke Kelly statue in Dublin
12 Girls rescued after being trapped in barn deliberately set alight
13 Thomas Byrne denies being source of Barry Cowen drink driving story
14 ‘Holy trinity of taoisigh’ to have up to 17 advisers, Dáil hears
15 Barry Cowen profile: Minister’s apology to the Dáil settled matters only temporarily
16 Man jailed for road rage incident outside Dublin shopping centre
17 Galway reopening: ‘This is hitting tourism hard’
18 US passengers fly into Dublin: ‘I’m here for six days. I guess I’ll have to stay inside’
19 Ghislaine Maxwell denied bail on charges of luring girls for Jeffrey Epstein
20 Normal People benefited from the pandemic, says Lenny Abrahamson
21 Covid-19 laces granting of Irish citizenship with danger
22 My daughter won’t go out to meet friends after lockdown
23 Fintan O’Toole: Jack Charlton allowed us to accept the English part of our Irishness
24 Chilean student kept in solitary confinement in Mountjoy Prison is freed
25 Sweden’s grim Covid-19 result: More death and nearly equal economic damage
26 Gerry Thornley: Munster will make for interesting case study when rugby resumes
27 Will Revenue come calling with tax bill if inheritance tax threshold falls?
28 Marian Keyes: ‘I thought when I stopped drinking my life was over. It was just beginning’
29 Game Changers: Gary O’Toole took a stand when others turned their heads
30 Random coronavirus testing for people entering Ireland under consideration, says Varadkar
31 Owners of Cork shopping centre sue for €30m after car causes fire
32 Minister for Children condemns ‘homophobic’ attacks from ‘far-right’
33 Thandie Newton names names. Will Hollywood punish her?
34 ‘Mother Mooney’, the Mayo woman who campaigned for justice for her wronged son
35 State’s sustainable transport ‘failure’ reported to OECD
36 Alain Rolland to step down from World Rugby position
37 How TikTok turned my five-year-olds into proto-teens
38 Serbia and Montenegro taken off EU safe list for non-essential travel
39 Naya Rivera: Glee actor’s body found in lake, authorities say
40 Leo Varadkar says Barry Cowen has more questions to answer
Real news has value SUBSCRIBE