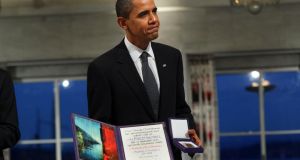 Barack Obama accepting the Nobel Peace Prize in 2009: He was fully aware of the irony that he was deploying more troops to Afghanistan at that very moment. Photograph: Doug Mills/New York Times

Sometimes even the best-laid plans can go awry. The first volume of the long-awaited memoir from Barack Obama was scheduled to hit shelves on November 17th – two weeks after the US presidential election. The timing was supposed to ensure that the former president would not be weighing in during a highly contested campaign. Instead, A Promised Land landed as Donald Trump refused to accept the results of the election, plunging the country into an unprecedented constitutional stand-off.

Though Obama’s successor is not mentioned until the final chapters of this voluminous work, he is a ghostly presence throughout. Dipping in to the world of another president, just a decade ago, the contrast with the presidency of Trump is inescapable. While we must wait to see what illuminations Trump shares with us if and when he writes his own memoirs, Obama’s new work is an absorbing account of the events that brought him to the White House and the first 2½ years of his presidency.

4 My first year as an ex-TD: ‘I looked for jobs, but I didn’t make the grade’

6 Badge of distinction: Meet the first Sikh in the Garda Reserves

8 Ireland’s lost golf courses: What happens when the gates close?

13 Meal Box review: From the first bite you will be bowled over

16 Teaching was Jerry Kiernan’s vocation; in 30 years he never missed a day

17 David McWilliams: Why the young are priced out of the Irish economy

18 Covid-19 infection rate in hospitals ‘out of control’

20 Behind Her Eyes: Eve Hewson could have found star-making role in Netflix thriller

21 Covid-19 and travel: Quarantine and increased Garda checks near Dublin airport on cards

24 Richie Power: ‘To me, Kilkenny’s problem is at the roots’

26 ‘I got a burning smell in my nose’: Third-wave Covid-19 patients share their experiences

34 Remote working ‘revolution’ bringing people back to towns and villages

35 Parents of children with special needs: ‘We are emotional and exhausted’

38 Two arrested as cannabis worth €1.2m and firearm seized by gardaí

39 Coronavirus search: See how Covid-19 is spreading in your area

40 A Kerala Kitchen curry for the weekend