Book review: Isabel Allende generational saga is quite old-fashioned in its epic, romantic arc and can lapse into dullness 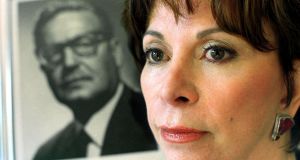 Isabel Allende pictured in her office in California in 2000. Allende is the niece of Dr Salvador Allende Gossens (pictured in the background) who had been elected president of Chile in 1970 but was ousted by a coup led by Augusto Pinochet in 1973. Photograph: Jakub Mosur/AP

Beginning in the final year of the Spanish Civil War, when it is becoming clear to Victor Dalmau and Roser Bruguera that the Republican cause is doomed to fail, Isabel Allende’s A Long Petal of the Sea covers half a century of political and social upheavals across Spain and Chile. When the two protagonists become refugees, Roser flees across the Pyrenees whilst heavily pregnant, eventually giving birth to Victor’s brother’s son, whose father is killed in battle. Victor, who marries Roser platonically in order to gain passage to a ship outfitted by the Chilean poet Pablo Neruda, has worked as a medic in the battlefield, and the two escape to Chile to seek a better life.

Though this novel does not have the magical realism of some of Allende’s other work, it retains a romantic sweep. This generational saga, carrying the reader from the 1930s right through to the early 1990s, is stacked with historical detail, though it often feels like the research takes prominence, and characters take a back seat in their own story. Often, that means that stereotypes come into play, or the characters themselves become emblematic of certain archetypal figures. The two brothers with which the story begins, for example, are Guillem and Victor, one is bulky, manly, and a warrior, the other is skinny, romantic, and poetic.

1 Gardaí investigating four-lane motorway sulky race
2 Is coffee good for you?
3 Woman sues over catching Legionnaires’ Disease in luxury hotel spa
4 Bloomberg attacked from all sides in heated Democratic debate
5 I decided that day if I start working for myself at least I'll know where I stand
6 ‘Right-wing extremist’ motive suspected for man who killed nine in Germany
7 Miriam Lord: Posturing, preening and photo-ops dominate 33rd Dáil prelims
8 Andy Farrell ticking all the boxes in advance of England showdown
9 Newton Emerson: Martin and Varadkar must set out terms for Sinn Féin
10 Ireland wary of Peyper calling the tune as they head for Twickenham
11 Galway development could transform skyline with 21-storey tower
12 A Russian cruiser with ‘cannibal rats’: What other ‘ghost ships’ could be out there?
13 Grave concern in North over London’s new immigration rules
14 Teenage girl killed and two injured in Co Cork crash
15 Council to refuse applications for Airbnb-style short-term Dublin lets
16 Expert tips: A dentist on how to have perfect teeth
17 Classic car dealer closes doors on prime Dublin 4 site
18 Martin tells party government may not be formed until April
19 Tusla disclosed location of child victim to alleged abuser – report
20 The science of rest and why it is important to daydream
21 Jim Mansfield Jnr denied permission to attend mother’s birthday party in Spain
22 ‘If all the immigrants go back, who will work in the meat factories and do the crap jobs?’
23 Would you kill one person to save five? Depends if you’re a millennial or not
24 David Brady says he has witnessed the illegal payments of GAA managers
25 Owen Doyle: Day of the jackal may be coming to an end
26 Planners probe Dermot Bannon’s garden bath den
27 The Irish Times view on the UK’s migration rules: crude and self-defeating
28 Players impressed with Bono’s Irish pride and desire
29 Jewish council dismayed at Sinn Féin TD’s ‘unacceptable’ tweets
30 Firm behind luxury Dublin rentals to appeal short-term let ban
31 DUP pleads with UK to reduce salary threshold for migrant workers coming to North
32 I’m worried about my neighbour’s new ‘shed’ and what he intends to use it for
33 New State body lent €114m to build 600 homes in first full year
34 Big tech ‘procedural queries’ delay decision on first data fines – watchdog
35 Colum McCann on Israel-Palestine: ‘I was completely ignorant of what was going on’
36 Fianna Fáil names team for formal government formation talks
37 Person claiming to represent ‘ghost ship’ owner comes forward
38 The best places for a family lunch: try these 10 great spots
39 Zoë Kravitz: ‘I did a lot of dumb stuff in my 20s’
40 Coronavirus: Two passengers die after leaving Japanese cruise ship
Real news has value SUBSCRIBE