A Light That Never Goes Out by Keelin Shanley: a down-to-earth account of a life well lived 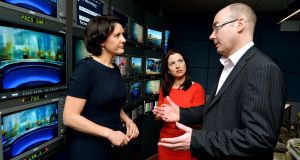 “It’s a funny thing to suggest that you can somehow get used to the idea of dying, but you can. You’d be surprised.” Written as force of nature Keelin Shanley was preparing for her death, A Light That Never Goes Out is at once an account of a life that was, by any measure, extraordinary and a love letter to life itself.

In 2013, some two years after her first bout with cancer, Shanley was interviewed by Ryan Tubridy on the Late Late Show. Watching the interview back, she thought perhaps she had been overly cheerful about her illness. “But my intention wasn’t to make light of things - it was simply to show that people can and do face the ‘C’ word and overcome it. I am struck by what I say at the end: that we have to remember, people die of this disease. At the time, I wasn’t talking about me - I was talking about the unlucky ten per cent of women for whom the disease will return in five years. I never for one moment thought it would be me.”

1 When Anthony Clare met ‘calculating, disturbing’ Jimmy Savile
2 Seán O’Brien: Anger over my parents’ break-up never left me
3 Sacha Baron Cohen: ‘I had to ring the alarm bell and say democracy is in peril’
4 Two hundred Irish retailers for all your online Christmas shopping
5 Couple found guilty of murdering Irish dancer with ‘devil’s breath’ drug
6 The baby black market
7 US election: Trump visits battleground states as Covid-19 numbers surge
8 Jennifer O’Connell: No transparency behind swerve into severe lockdown
9 Further anti-lockdown protest held in Dublin city centre
10 We need to reverse our thinking on lockdown
11 Dermot Bannon: ‘I used to win Lego competitions ... but I lied about my age’
12 How to cosy up your outdoor space this winter
13 Covid-19: Taoiseach warns ‘bumpy roads ahead’ as 859 cases and four deaths reported
14 Tanya Sweeney: I wish I’d kept my naked pics. I feared they’d end up in the ‘wrong hands’
15 Gardaí find ‘fully operational bar’ after visiting suspected shebeen
16 David McWilliams: Lockdown decision makers still get paid. Those they shut down do not
17 ‘I’m sleeping with my ex-boyfriend and want him back – but don’t want to scare him off’
18 Hugo Keenan and Will Connors: The best of friends, the best of debuts
19 How Terence MacSwiney’s death led to estrangement between his wife and daughter
20 Sophia Loren: ‘I never had a relationship with my father’
21 Rock’ n’ wool: Irish knits come in from the cold
22 Why Waterford is ‘the best Covid county in Ireland’
23 Life under Level 5: Where can I go, who can I see, what is closed and what is open?
24 Late Late Show: In Covid-19 Ireland, Tony Holohan is bigger than Bruce Springsteen
25 Strengthen your muscles without leaving the house
26 Q&A: Mother and Baby Homes Commission database
27 Sinn Féin’s stand on Covid is facing increasing questions from political rivals
28 Cab investigates behind the massive gates of Chosen Few Motorcycle Club in Dublin
29 Borat 2: Rudy Giuliani’s trouser-reaching scene is the work of a daring young woman
30 Roddy Doyle’s Nurse – an exclusive new short story
31 Sinn Féin ‘summoned’ people to Storey funeral to deliver political message - Taoiseach
32 Champagne Football: bursting John Delaney’s bubble
33 Covid-19: Over a million units of recalled hand sanitiser sent to health facilities
34 Homeless woman’s courage praised as man jailed for sexual assault
35 ‘In 2018 I wrote publicly about my heritage. Soon after, the anti-Semitic messages began’
36 Mother and Baby home survivor: ‘My identity, heritage and culture was taken from me’
37 My Irish passport has calmed tempers at borders and airports
38 Ireland 50 Italy 17: Ireland player ratings
39 France recalls Turkish envoy after Erdogan claims Macron needs mental help
40 Fintan O’Toole: Donald Trump’s campaign has a joyful new message – ‘I’m alive!’
Real news has value SUBSCRIBE