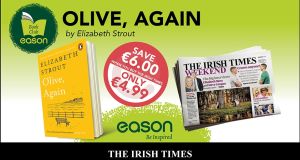 Olive, Again by Elizabeth Strout, the acclaimed sequel to her bestseller Olive Kitteridge, is this Saturday’s Irish Times Eason offer.

Naoise Dolan and Seán Hewitt have been shortlisted for the Sunday Times Young Writer of the Year for Exciting Times and Tongues of Fire respectively. Also shortlisted for the £5,000 prize, previously won by Sally Rooney, are Jay Bernard for their first full collection, Surge, on the New Cross fire; Catherine Cho for Inferno, an account of her experience with postpartum psychosis; and Marina Kemp for her first novel, Nightingale.

Judge and regular Irish Times critic Houman Barekat said: “Shortlists don’t have to be eclectic, but it ’s nice when they are. There is something here for everyone: Naoise Dolan’s Exciting Times has a very contemporary fizz, whereas the careful pacing of Marina Kemp’s Nightingale will appeal to readers of more conventional novels, the collage aesthetic of Jay Bernard’s Surge complements the more traditional lyricism of Seán Hewitt ’s Tongues of Fire, while Catherine Cho’s illness memoir Inferno is a powerful work of non-fiction.”

Fellow judge Kit de Waal said: “Wonderful writing from exciting young authors, demonstrating a range of technical ability, outlook and style. It ’s been a privilege to read their work and to have been immersed in their worlds.”

Naoise Dolan has also been shortlisted for the Waterstones Book of the Year 2020, along with Dara McAnulty for his Wainwright Prize-winning Diary of a Naturalist and Maggie O’Farrell for Hamnet, which has alreasdy won this year’s Women’s Prize for Fiction.

The winner will be chosen by a Waterstones panel headed by James Daunt and announced on December 3rd.

Associate publisher Robin Robertson acquired UK and Commonwealth rights to All Down Darkness Wide from Matthew Marland at RCW. The book is is set for release in 2022.

Through a “deeply moving” love story, Hewitt traces the aftermath of his partner Elias’ suicide attempt and “asks why the mental health of queer people remains, still, an unaddressed issue and a social scandal”.

“Moving between Liverpool, Cambridge, South America and Sweden, Seán’s story explores the continuing social stigma around homosexuality, and finds solace and freedom in the natural landscapes where he has always felt complete,” his publisher says. “This is an achingly beautiful book that fearlessly explores the darkest moments of the gay male experience, with pride burning defiantly throughout.”

Hewitt, who lectures in English literature at Trinity College Dublin, said: “It’s a project unlike anything I’ve done before – part coming-of-age memoir, part cultural history, part love letter to the natural world. I hope that the book, which delves deep into my own life and into the history of queerness, will not only counter prejudice and shame, but also illuminate modes of consolation and defiance.”

Saturday’s books pages include Irish writers on their favourite classics novels, a great reading list for the winter ahead; an edited extract from Saving the State, by Ciara Meehan and Stephen Collins;  and the following reviews: Keith Duggan on My Life in Red and White: My Autobiography by Arsène Wenger; Klopp by Anthony Quinn; Sinéad Gleeson on Drifts by Kate Zambreno; John Crown on The Language of Illness by Fergus Shanahan; Eamon Sweeney on I Wanna Be Yours by John Cooper Clarke; John Self on the Goldsmiths Prize shortlist; Niamh Donnelly on Are You There, God? It’s Me, Ellen by Ellen Coyne; Sarah Gilmartin on What You Could Have Won by Rachel Genn; and Sara Keating on the best new children’s books.

Olive, Again by Elizabeth Strout, the acclaimed sequel to her bestseller Olive Kitteridge, is this Saturday’s Irish Times Eason offer. Save €6 on the normal price of €10.99 when you buy it with a copy of this newspaper.

Irish PEN is about to relaunch as Irish PEN/PEN na hÉireann, following the amalgamation of the original organisation and the Freedom to Write Campaign. A steering group has been established to set up an organisation featuring some new structures while adhering to the principles of PEN International and the PEN Charter.

The new Irish PEN/PEN na hÉireann will be launched at an online Zoom event to mark the Day of the Imprisoned Writer on Sunday, November 15th at 7pm. Register here.

In the first year that the Carnegie Medal has been opened up to Irish-published books, a Little Island title, The Gone Book by Helena Close, has been nominated.

Already shortlisted for the YA prize at this year’s Irish Book Awards, it is now in contention for what many regard as the most prestigious prize for YA books.

Helena Close said: “I am honoured and delighted that my novel, The Gone Book, has been nominated for The Carnegie Medal. Doubly chuffed that a story so resonant of my city of Limerick and published by Little Island, a small independent publisher, made it onto this prestigious list.”

Publisher Matthew Parkinson-Bennett said: “There were tears in the Little Island office when we found out about this. This is the children’s books equivalent of getting onto the Booker longlist in the first year Irish books became eligible for it. That a book about Limerick has made the list for this globally renowned prize is a testament to the authenticity of Helena’s depiction of teenage experience. The book suffered from coming out just before lockdown in the spring so we hope this will give it a new boost.”

From Irish Fever to Chinese Flu: the Racialisation of Epidemics is the title of an evening of contextualised poetic consideration of the way nations are stigmatised by disease, which takes plac e online on Thursday, December 3rd, at 7pm. It will start with a discussion by Don MacRaild and Louise Ryan, followed by poetry from Ian Duhig, Anna Chen and Kit Fan.

It is a commonplace that one particularly savage strain of influenza was labelled as Spanish flu. Less well known is the ascription to syphilis of the moniker, the French disease. The virulent strain of typhus that killed thousands in Ireland and Britain in 1847 was, in those days, dubbed the Irish Fever. Latterly, Donald Trump made another such association stick in certain circles when he called Covid-19 the Chinese flu. What Trump did was not new. It happened in 2020 and it will happen again. Moral panics that arise from new, terrible experiences of disease are made worse by racist overtones, and by the apportioning of blame.

Within the context of a developing research project, which is comparing responses to immigrants in the light of Irish Fever and Covid-19, Profs Don MacRaild and Louise Ryan are bringing social science research and cultural and artistic reflection. The four poets of Irish and Chinese heritage will bring national and cuktural dimensions to the discussion. Register here for this free event.

This year’s William Hill Sports Book of the Year features Born Fighter by Ruqsana Begum; The World Beneath Their Feet by Scott Ellsworth; The Unforgiven by Ashley Gray; The Breath of Sadness: On Love, Grief & Cricket by Ian Ridley; and The Rodchenkov Affair by Grigory Rodchenkov.