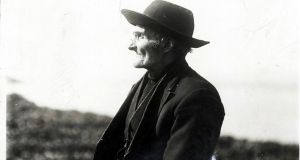 BORN IN 1855 on the Great Blasket Island, Tomás O’Crohan wrote The Islander, his autobiography, in his later years, at the request of others who foresaw the end of lives like his, and who worried, too, about the end of the Gaelic language. The book stands alongside those by Peig Sayers and Muiris Ó Súilleabháin as testimonies to the lives of people who seem connected to us now only very remotely, and tenuously. And as central, vital texts of the Gaelic Revival.

There is, in Prof Alan Titley’s foreword, and in Prof Seán Ó Coileáin’s preface, and in the introduction from the translators themselves, a repeated emphasis on the difficulties of translating from Irish to English. There is a sort of defensiveness in this, an insistence almost on the impossibility of it. As Titley puts it, “between Irish and English there are vast shelves of libraries and vast cities and practised bureaucracies and marching troops and technical wrestlings which make the gap of feeling immense”. The only previous translation is by Robin Flower, from 1934. Flower knew O’Crohan (who refers to Flower, sweetly, as Bláithín) and was one of the scholars who visited O’Crohan in the latter part of his life, keen to get him to account for himself and the Blaskets, and to document his language.

This new translation seeks to update that of Flower, and to present a version that prioritises, as the translators put it, clarity and readability. And in this they have succeeded. It’s clear, and you can read it. The translators also ask a question in their introduction: “To whom is our translation being addressed? – to students of Irish who might be studying the original Gaelic or to a much more general readership?” But they don’t answer it. And I wonder if that’s because here is a book which, in its full, repetitive, tedious entirety, I can only imagine being useful to Gaelic students as a reference, and of appeal only to the most masochistic of general readers.

Whomever it’s intended for, they will be frustrated by curious presentational deficiencies. There is talk in the various introductions, and on the book cover itself, of several “earthy” passages missing from the Flower translation and restored here.

Nowhere are we told which passages they are. Five short appendices contain more from O’Crohan on aspects of island life, but there is no explanation of why these are separated out from the main text, or where they are from. There is no index. There is no assistance for the general reader on things such as dates (O’Crohan rarely specifies a year) or geography (a simple map might help), nor any context provided by way of notes on matters such as land ownership, taxes and rents, what was behind the various attempted administrative interventions in the islands that O’Crohan mentions, and so on. It makes for frustrating reading.

But none of that is O’Crohan’s fault. And it’s his company we keep for more than 300 pages. It’s wearying company, I’m sorry to say.

Here is a man who lives a hard, straightforward life, who “ploughs the sea” and works the land, who grows up and marries and has children, who gets drunk often, and who gets learning in fits and starts but seems to take to it, and who settles into an old age of Gaelic Revival-prompted reminiscences. But there are so many repetitions, so much attention given to minor occurrences and so little to major ones, that it becomes – like the life perhaps – an exasperating and tiresome chore.

O’Crohan was asked for this book by people who called at his door – a fact that shapes it and ultimately, I suspect, smothers it. He was writing for a very immediate and specific audience. He alludes at times to a wider readership, but he knew that what he wrote would be read in the first instance by men who would turn up at his house every few months looking, and paying, for more. And you can feel in his tone and his focus a man who has no wish to be dishonest, who has been convinced of the anthropological worth of the project, but who makes of his life a list of things he’s done, easily told things, things in which he takes pride – which he balances with a bombastic humility – and who as a result gives us a peculiarly superficial idea of himself, delivered in an unrelenting, exculpatory banter.

We get a lot that seems familiar through the parodies it has engendered over the years, from Myles Na gCopaleen to Father Ted. Shipwrecks and drownings, punch-ups at weddings, battles with tax- and rent-collecting authorities, lots of drink, diving for crab to use as bait, fishing, bad weather, killing seals, rescuing uncles, dancing lessons, singing, a succession of school teachers and inspectors, and death and drink, drink and death, repeatedly. Nowhere do we get any real sense of an interior life, of O’Crohan’s loves and griefs and doubts. And there may have been love. A woman on Inishvickillane is visited often – though he doesn’t say more than that he spent a lot of time there, and flirted with her. He is infuriatingly coy throughout. But he married, under apparent pressure from his family, a different woman. The lament he sings at his own wedding certainly suggests he wasn’t happy, but he says nothing. He mentions his wife’s name, Mary Keane, and doesn’t mention her again until she dies. After bearing 10 children. The first we hear of his children at all is when one of them is killed in a cliff fall.

We do hear repeatedly about his uncle Dermot, a “rake” and a “gasbag” who nevertheless seems to have provided O’Crohan with most of his adventures – all of them related to getting drunk on visits to the mainland, or getting nearly drowned closer to home. We hear too about his neighbour, called only the “old hag”, who seems to have provided, along with her “inept” husband, most of the entertainment of his growing up. O’Crohan is a hard man to like.

It would be wrong perhaps, anachronistic, to expect an autobiography of emotions, even if the lack of them is startling. But we hear nothing about his beliefs either. There is no politics other than a smug dismissal of Home Rule on the basis that the Blaskets have never had anything else. There is no religion, apart from the formulaic invocations that punctuate every page. There is no sense whatsoever of curiosity about a wider world. The US, interestingly, is repeatedly disparaged as a terrible place – “the country of blood and sweat and toil”. O’Crohan gets about his business. He goes fishing again. There’s another storm. We get three or four pages on the trouble they have getting a catch in, and a couple of lines on the death of another child.

And it may be that these choices made in the writing really do reflect the man. But I doubt it. Late on in the book, he writes: “Of all the terrible things that have ever happened to me, dealing with death has always been the most terrible of all.” How could it be otherwise? But you wouldn’t know it from anything else in The Islander. And I can only think of those linguists and anthropologists sitting in Tomás O’Crohan’s house, asking him to write down the facts of his life for them. And he spending a few hours every week giving them whatever seemed to please. And I can imagine him, and I really hope this is true, going out of his house then and being a far fuller person than this book suggests.

‘In five seconds my life changed. I was worse than the worst jazz snob’
5