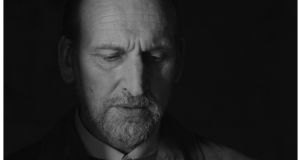 No sooner had shooting been completed on Willie Doherty’s new short film, Endless, in Derry in March, than normal life ground to a halt. Doherty’s usual procedure is to present his video or film work as gallery installations, accompanied by related photographs. Covid-19 has nudged him towards an online launch and the video is available to view on Vimeo.

In recent years, Doherty’s video work has tended towards a reflective, mournful, tragic tone. Voiceover monologues, written by him and performed in character by actors, including Stephen Rea, contribute greatly to a mood of rueful disenchantment.

It is as though, having grown up through the Troubles and having as an artist directly addressed the history, events and psychology of conflict and division in Northern Ireland, Doherty wonders, through the voices and observations of his narrators, if anything has been learned or accomplished, whether politics and attitudes have advanced at all. His characters are haunted by the past, a past that is persistent but disregarded. All that pain and terror, all the suffering bound up in myriad individual stories, amounted to a bill that has never been paid, that has simply been torn up and discarded.

Perhaps that seems a little extreme. But, as a native of Derry who has focused intensely, forensically on how the city and its hinterlands reflect and embody the abrasive realities of an Ireland divided through historical contingency, Doherty is well positioned to assess the gains or otherwise of the peace process. That includes a coarsening of civil discourse within communities, not just across communities, something brilliantly conveyed in Anna Burns’ novel Milkman, which, like the best of Doherty’s work, is so local it’s universal. So really it would be dispiriting if the tenor of his recent work derives not so much from a retrospective mournfulness, but from a current unease.

In the context of Brexit, there is plenty to be uneasy about with regard to Northern Ireland. But even the title of Endless, never mind its substance, suggests enduring rather than novel doubts. The persistence of underlying antagonisms is reinforced, or perhaps confirmed, by unfolding events way beyond the local.

As with other recent pieces by Doherty, Endless is a relatively static affair. The film centres on a monologue, though it soon becomes apparent that it is delivered post mortem, perhaps by a ghost. Christopher Eccleston is that ghost. Grizzled and troubled, drably dressed, he is as haunted and isolated as Hamlet. Lancashire-born Eccleston, familiar from television, as Dr Who and currently in BBC’s The A Word, was a tough-guy Macbeth in an RSC production some years ago. He has a knack for projecting toughness underscored by vulnerability.

In Endless, he paces and lingers in the rooms and corridors of a spartan, deserted, institutional-looking building, its brick walls coated in white. In voiceover, and directly addressing the camera, he reflects on a life of deceit and wrongdoing. Oblique fragments of a narrative do emerge, but in vague, non-specific terms. And there are two threads to his musings. The first refers to his becoming habituated to a life of deception, to living in “a labyrinth of lies”. False identities, pretending to be someone you are not, these things are suggested. But he is found out, and falls victim to what sounds like a summary, paramilitary style beating and execution. One thinks of the stories of informers and double agents and deep cover operatives.

There is, though, a second, consistent thread that could be taken to refer to the Troubles but also beyond, to our era of post-truth politics. During the decades of conflict, Northern Ireland was a kind of surveillance laboratory, and Doherty has previously looked to the growth of the surveillance state in a general sense. Within the relatively recent past, digital technologies and communication networks have transformed the whole idea of surveillance. Less predictably, more information has not meant more truth.

The protagonist in Endless recalls his childhood belief in an all-seeing god, an omniscient being with access to all of external reality and every corner of our minds. As he grew up he became acquainted with “the sweet thrill of transgression”, followed by the bitter pill of remorse. But the lure of transgression wins out. He is initiated into a covert world of subterfuge, becomes adept in”choreography of deception”. He had thought that there was no way around “historical facts and objective truths”, but finds that is not at all the case. As the philosopher Richard Rorty controversially put it: “Truth is what your contemporaries let you get away with saying.” It’s as if Rorty’s proposition has been adopted as dogma by a large proportion of the world’s population, including politicians.

To his great credit, Doherty’s videos are always succinct and never overstay their welcome. Their uniformity of tone is perhaps a limitation. A great deal depends on the spoken word, and he chooses his words very carefully and precisely.

Concise as Endless is, the two threads running through it don’t altogether connect. Eccleston is a powerful presence, and in opening out the discussion, so to speak, Doherty dilutes the strength of that presence. By the end we are left wondering exactly which kind of villain he is – or was: a hard man in too deep, or a slick political operator. His demeanour suggests the former, the import of much of what he says the latter. It could be that Doherty likes the ambiguity.

Endless, by Willie Doherty, is accessible through the online viewing room at the Kerlin Gallery, kerlingallery.com until June 16th