What a load of smetch: new words to describe art 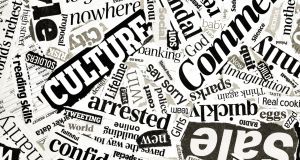 “Exhibition text... can open doors into ways of thinking about the artwork; it can talk about important historical facts or writings; it can lead you into a parallel way of thinking about something else or can be entirely descriptive of what you see.”

In October, I went to the gallery at Project Arts Centre. The first thing I saw was a wooden frame, and the second a large poster on the wall: no image, just two columns of text, amounting to some two thousand words (just under twice as long as this article). At the Douglas Hyde, that same afternoon, the exhibition handout consisted of a stapled document containing five pages of writing, relating to the works on show. I came away from both shows with that bemused feeling I so often get in a certain kind of exhibition: with so many words, why didn’t they just write a book?

On a closer look, the pieces of writing turned out to be quite fascinating. The Project show was Wait it Out, by Sandra Johnston, and in the large wall text, she described a series of moments in her life, highlighted by the Troubles and their continuing repercussions. The writing was beautiful, poetic and moving, and it seemed to have acquired a certain gravitas by being on the wall of an art gallery. Yet I’m still not persuaded that’s the best place for it. Elsewhere in the gallery, the wooden frame made a route through, to see a video that I’m sure had powerful import, but which didn’t quite grab me. In a second room there was another video, showing one of the artist’s street performances juxtaposed with news clips of The Peace People movement in 1970s Northern Ireland.

Now there’s an arty word: juxtaposed. Why didn’t I just say “interspersed”? Or “set against”? Like putting words on a wall, using a certain kind of language can add a sense of cleverness to your pronouncements. The trouble is, most people forget that true wisdom lies in not appearing to be clever: true wisdom lies in wearing, and wielding what intelligence you have, lightly but well.

Later, I got the press release for Maria Loboda’s Hearing Otherworldly Music at Sligo’s Model (until February 9th). “In an intriguing and eclectic practice, which defies categorisation, Loboda acts as an artistic archaeologist, excavating, reframing, connecting and illuminating elements of our shared cultural history, from antiquity, through modernity and the contemporary. Language, meaning, signs and symbols coalesce...”

But I’m still not quite sure it is that they’d like us to come and see. Likewise, Mermaid in Bray is showing Dorje de Burgh’s Dreaming the End (until February 1st). “It is a map of oedipal desire and its potential for violent and destructive excess; a cross generational collaboration, an analysis of the flow of intra-subjective trauma, a matrixial duet.” The accompanying photograph is very beautiful.

Beauty is frequently an issue for those who like their art on the wordy side. Beauty affects us sensually and emotionally, in ways that frequently deny explanation and interrogation. Feelings are the bête noir of intellect. And yet feelings matter. We were pre verbal for far longer than we have had language, in evolutionary terms, and feelings and instinct were vital. And one of the most wonderful and powerful things about visual art is the way in which it can get under the skin, behind language, and straight to whatever is left of our more primal core.

Back at the Douglas Hyde, the lengthy text was part of Fatal Act, an exhibition by a collective that goes by the name of 13BC. Via its pages, I learned about Major Claude R Eatherly, the military weather pilot who gave the “all clear” for the bombing of Hiroshima. After the war, his life became a story of incarceration and institutionalisation. Once again, I wondered if it might not have been better as a book. The centrepiece of the exhibition is a film, of actors reading parts from a never-made screenplay about Eatherly’s life. So we have a text that isn’t a book, and a screenplay that isn’t a film. Maybe the gallery is the only place for it?

But does that mean art galleries are dumping grounds for not-quite-books, not-quite-films, and not-quite-philosophies? Or, alternatively, if you lose the pejorative, maybe that is exactly what art galleries a for: spaces for things and ideas that defy categorisation.

“It’s something I think about a lot,” says Georgina Jackson, director of the Douglas Hyde Gallery. “Exhibition text is never just one thing in any exhibition. It can open doors into ways of thinking about the artwork; it can talk about important historical facts or writings; it can lead you into a parallel way of thinking about something else or can be entirely descriptive of what you see. For me, this is the magic of text. It can expand, or contain, or take you somewhere else.”

For Jackson, the 13BC text is a generous addition to the exhibition. “It’s their constellation of knowledge that can inform your reading of the work, but mostly it asks you to look and to look for what you can’t see.” It’s true that art doesn’t have to be visual. In the case of another Douglas Hyde show, Garrett Phelan’s Free Thought FM, it took the form of a radio show.

Unfortunately, in many cases, when the text is asking you to look for things you can’t see, it’s also masking thin art. There are many exhibitions in which slight work seems to be the vehicle for screeds of words, frequently unreadable. Parse them out and find an idea that feels like deep truth, but which, when you stop and think, isn’t saying too much at all.

At Imma earlier this year, a wall panel for Wolfgang Tillmans’s exhibition, Rebuilding the Future, read: “The exhibition is installed in Imma’s galleries in direct relation to the physical spaces, light and atmosphere of the museum […] Throughout the galleries, the installation presents works placed in relation and correlation to each other, and to the gallery itself…” Name me, I thought, one exhibition that doesn’t do that.

One reason artists and curators do this is because that’s how it’s taught in college. It is the job of academics to discuss complex ideas in complex terms, and they are also being paid to do it. This doesn’t mean it should transfer into the wider world. And it also doesn’t mean any of us is stupid for not getting it. For a brilliant unpicking of what they describe as International Art English, look up David Levine and Alix Rule’s article of the same name on canopycanopycanopy.com.

But lest you think we had more than enough words for art already, a new publication from the Limerick biennial, EVA International, aims to add a few. Working with local eight to 12 year olds, EVA director, Matt Packer, with Eimear Redmond and Maeve Mulrennan, created Better Words. The book is a directory of new ways of describing making and looking at art.

“The project started with a common paradox,” explains Packer. “On one hand, language and articulacy play an important part in the way that contemporary art is produced. It’s part of the ambition and intended complexity that artists bring to it.” The problem, he agrees, is when language becomes a barrier.

“Writing about art can be a lonely place,” he says. “Reaching into the dark, grasping at something elusive and imprecise, at the very edge of comprehension. I’m sympathetic to jargon as a genuine attempt at this kind of complex articulation. I’m much less sympathetic to jargon that casts its false authority over people, and there’s plenty of bad examples of that around.”

Introducing the book, Kevin Barry agrees. Barry, whose own writing conjures extraordinary images in the mind, both of physical and emotional space, describes his experiences as a kid, lying in bed as “strings and jumbles of words kept on rising up from me and forming into a noiseless babble”. He agreed to participate because, “it seemed important, a project that makes younger people think about words in kind of weird and cool and abstracted ways”. Encouragingly, Barry believes that “obtuse language is rightly becoming unfashionable in the art world”. Artists and galleries take note.

Annoyingism: a feeling of frustration when initial ideas that sparked excitement do not turn into reality.

Doubtarting: the lack of confidence to begin any creative work.

Smetch: an artwork that is too good or bad to explain.

Fakey Bading: an artwork that intentionally looks like a failure and becomes interesting because of this.

Incatoche: the urge to touch an artwork on display.

Better Words, published by EVA International, is distributed via libraries, and available for €10 plus p&p from eva.ie/shop