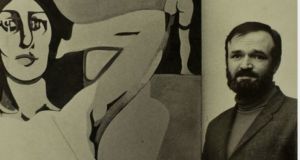 Faces in the clouds

The Michael J O’Connor Collection. Foyer Gallery, Solstice Arts Centre, Railway St, Navan, Co Meath. Until January 31st, solsticeartscentre.ie Michael J O’Connor, of Walterstown, Co Meath, assembled his collection of oil, watercolour and gouache paintings in the 1980s. He was convinced that most of them are the work of the Irish post-impressionist Roderic O’Conor. Using information in the works relating to date and location, he researched his hypothesis. By the time of O’Connor’s death in 1995, one painting had been authenticated as an original O’Conor. More recently, his daughter Siún has followed up on his research and made a film, A Rich Inheritance, about his project.

Group exhibition. Olivier Cornet Gallery, 3 Great Denmark St, Dublin. Until February 29th oliviercornetgallery.com Originally devised for the Wexford Opera Festival (coinciding with a production of Massenet’s Don Quichotte), this group show – as Cornet points out the “world’s first modern novel”– is so rich in thematic material that it provides endless inspiration for artists in all disciplines. Conrad Frankel, Claire Halpin, Eoin Mac Lochlainn, Yanny Petters and Vicky Smith are among those dipping into the pot.

Yeye Weller. Hen’s Teeth Gallery, Blackpitts, Dublin hensteethstudio.com Yeye Weller is a graphic artist from Münster in Germany. The graphics in New Year, Same Me, made with a vintage animated carton feeling, take a playfully jaundiced view of the ritual of new year’s resolutions. “This exhibition,” he suggests, “will show you that it is okay to be lazy and inconsistent.”

Tommy Weir. The Dock, St George’s Terrace, Carrick-on-Shannon, Co Leitrim. Until March 14th Tommy Weir’s eerily calm, moonlit views of remote, deserted rural locations harbour a secret. Each is the site of a cillín, the unconsecrated burial place for an unbaptised child. By custom, the father would take the child’s body and convey it to the cillín, burying the infant during the hours of darkness. In making the work, Weir set out to echo the lonely nighttime journeys of the fathers.