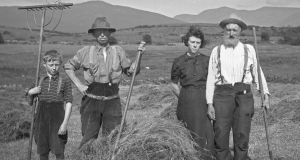 Christmas Stocking Fillers
The Doorway Gallery, 24 South Frederick St, Dublin. Until December 24th
Works by all of the gallery’s artists, but all priced under €500. That’s the premise of the Doorway’ Christmas show. With that ceiling in mind, the artists have made modestly scaled pieces, but cut no corners when it comes to the quality of the work. Lucy Doyle, Kate Beagan, van Daly, Gordon Wilson, Steve Browning and many more feature. Open daily until 3pm on Christmas Eve.

Winter Show 2019
Graphic Studio Gallery, Cope St, Temple Bar, Dublin. Until January 11th
The Graphic Studio show highlights work by studio members plus work made by participants in its visiting artist scheme. Besides the work in the exhibition, the gallery holds a superb selection of printworks by a wide variety of artists. It hardly needs pointing out that limited edition prints represent excellent value, especially with the imprimatur of such a highly regarded studio. Open until 3pm on Christmas Eve (then from January 5th).

Winter Group Show
The Molesworth Gallery, Molesworth St, Dublin. Until December 23rd
Cristina Bunello’s paintings have a rare, mesmeric quality. Painstakingly made, they appear to have been conjured into being, intact. Their magic-realist associations with fairytales include the edgy menace of fairytales. Her Snow White is in the show. Like Bunello, her co-exhibitors, including Helen Blake, Megan Burns, Mercedes Helnwein, Catherine Barron and Molly Douthit, are all utterly distinctive artistic personalities.

Taoiseach’s Residence and State Guesthouse Architecture Competition
Architecture gallery, Irish Architectural Archive, 45 Merrion Sq, Dublin. Until February
Many original drawings are on display from entrants to the 1979 competition to design a residence for the Taoiseach in the Phoenix Park. At the time the compeition attracted a great deal of interest in Ireland and abroad: Zaha Hadid, David Chipperfield and Rem Koolhaas all submitted proposals. The winners, Evans and Shalev Architects, never saw their scheme come to fruition. When Charles Haughey replaced Jack Lynch the plan was shelved on economic grounds. A visitor centre now occupies the site.

A Modern Eye: Helen Hooker O’Malley’s Ireland
Bourn Vincent Gallery, Foundation Building, University of Limerick, Limerick. Until January 17th
A woman of huge energy and talents, from a privileged background in Connecticut, Helen Hooker chanced to meet Ernie O’Malley and they married, settling for some time in Ireland. Photography was but one part of her creative activities (along with sculpture, design and theatre). There are riches to be found in her documentary images of Ireland’s ancient sites and structures from the late 1930s, plus life and environment, mostly in the West. She and O’Malley drifted apart but she retained her fondness for Ireland. Her Kodachromes of Dublin as it entered a phase of modernising transformation are exceptional, as is much else in this concise survey.