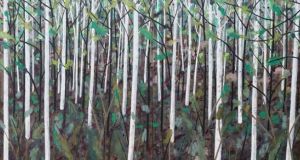 Ed Miliano: Advent
The Gallery at de Veres Auctions, Dublin, until December 19th
One of Ed Miliano’s best known works is Diary, a set of 366 small paintings documenting the view from his Dublin studio window every day over a year, first shown at the RHA in 2012. Since then he spent several years living and working in Tokyo, which proved enormously important for the development of his work, including his exploration of sculpture. He originally trained and worked as a graphic designer, and the discipline, concentration and clarity he brings to all his projects stems from this background.

Winter Exhibition 2019
Custom House Studios Gallery, Westport, Co Mayo, until January 19th
Custom House Studios and Gallery is a formidable cultural facility in an exceptional location, and this year’s winter group show marks the conclusion of its 17th busy year. An extensive and fascinating line-up includes artists who have worked in the studios and/or exhibited in the gallery through the year, from Norman Ackroyd to Marie Wood, around 60 in all, from Mayo and much further afield.