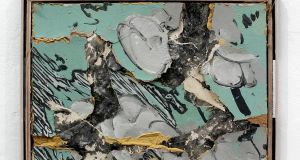 In Pursuit of the Brocken Spectre – Neil Carroll
RHA Gallery I, 15 Ely Place, Dublin, until April 26th, rhagallery.ie
Neil Carroll’s “built paintings” move painting into a “provisional space”. Fashioned with everyday construction materials, they are perpetually in the process of being made and unmade, never quite settled or complete. Though his title indicates that the desire for completion, for the definitive, endures, it is perhaps the endless pursuit that counts, since that is the nature of the world.

In Our Colours: Artworks from the DLR County Collection
The Municipal Gallery, dlr Lexicon, Dún Laoghaire, until March 29th, dlrcoco.ie
Selected works from the DLR collection, including some recent acquisitions. Often the artist in question will have a connection with the area. Included are works by Carey Clarke, Clifford Collie, Fiona Hackett, Paul Hallahan, Alison Kay, Maeve McCarthy, Kate McDonagh, Imogen Stuart and Lee Welch.

Wilma Vissers, Patrick Michael Fitzgerald: Two solo shows
Fenderesky Gallery, 31 North St, Belfast, until March 6th, fendereskygallery.com
Dutch artist Wilma Vissers spends time each year in the more remote areas of Ireland and Scotland including residences in Donegal and at the Tyrone Guthrie Centre. She is “inspired by emptiness and space”, and makes minimal, not minimalist works that encompass painting, sculpture, drawing and found materials. Patrick Michael Fitzgerald is a good match: his restlessly inventive pieces have a serious playfulness about them.

Susan Montgomery – Paintings
Mermaid Arts Centre, Main St, Bray, Co Wicklow, until March 28th, mermaidartscentre.ie
Susan Montgomery sees her nominally abstract paintings as a means of articulating her experience of the everyday in myriad ways, recording the rhythms, routines, environments, activities in the form of colour, marks, gesture and cohesive compositions. Originally from Wicklow, she is based in west Cork.