Oscar Fouz Lopez, Gabriel Kuri and Ima-Abasi Okon are among the highlights 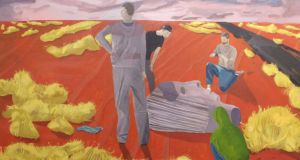 Spending Static to Save Gas: Gabriel Kuri (Gallery 1)
The Artist’s Eye: Water – Kirsten Pieroth (Gallery 2)
Douglas Hyde Gallery, Trinity College, Dublin, Until March 28th
Mexican-born Gabriel Kuri “plays with the principles of minimalism and the history of consumption” in a site-specific installation that aims to create “a static field” in the gallery’s considerable space and so “reduce the building’s energy use” for the show’s duration. His strategy is to drop the ceiling – though not the actual ceiling, seen littered with apparent detritus, plus a surrounding smoke drawing. In Gallery 2, Kuri invited German artist Pieroth to show some of her series of newspaper-based works.

Sur— [infinite Slippage: production of the r ~e ~a ~l as an intensive magnitude starting at zero-eight] —plus: Ima-Abasi Okon
Void, Patrick Street, Derry Until March 28th
As part of her exhibition, Ima-Abasi Okon partially lowers a gallery ceiling and applies an invisible concoction including insulin and ultrasound gel to the tiles. A slowed-down audio track, industrial air conditioning units and more form part of her exploration of “the formation of taste, value and excess”. There’s an underlying intimation that the richness of African culture is consistently ignored and discounted. Mary Cremin curates.

Multipolar: John Noel Smith
Hillsboro Fine Art, 49 Parnell Square West, Dublin. Until March 7th
John Noel Smith is, as the press release puts it, a “non-figurative painter”, but his visually compelling work always seems to apply to the world, all the same, on many levels. In his new body of work he is set on “co-ordinating the cartography of the centre with that of the periphery; scrutinising the horizon for a new field of vision”. Which is, when you think of it, an interesting way of considering the state of things right now.

You Are Made of Stardust: George Bolster
Solstice Arts Centre, Railway Street, Navan, Co Meath, Until March 20th
Major new show by Cork-born George Bolster, now based in New York, including pieces developed during a residency at the Search for Extraterrestrial Intelligence Institute and time spent with Nasa’s Kepler Mission scientists. Included are a panoramic, 3m-high tapestry and a suspended mobile that evokes “a cosmic array”.