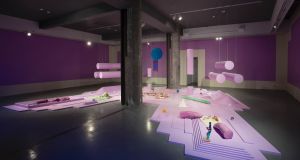 As the age and career profiles of artists who have won the Turner Prize has shifted from the early days – towards younger and less well-established artists essentially – it’s rare to find a winner whose professional life and prospects have not been transformed for the better by the experience. Will the Turner effect be diluted for the 2019 winners, all four shortlisted artists, who successfully lobbied the judges and asked to share the prize? This collegiate, co-operative gesture followed on the example of the Booker Prize being controversially split two ways, quickly followed, a little ignominiously, by the Bad Sex in Fiction Award.

Temple Bar had scheduled Tai Shani’s exhibition Tragodía before she was shortlisted, and of course won, the Turner Prize. Regardless of the win, Shani had a pretty full schedule. Tragodía centres on a non-linear virtual reality drama (non-linear, but with quite an emotionally intense climax), a series of interwoven monologues, each closely written from the point of view of one of a number of intimately-related individuals, including the central Ghost Child and her immediate female relatives. The virtual reality involves celestial and spatial expanses with a giant, orbiting head (presumably the child), though the piece would still work effectively if configured purely as audio, perhaps as a radio play. Writing is possibly the most important component in Shani’s work, and the high production values are scrupulously attentive to the writing.

The visual element does not dispel a degree of narrative ambiguity, but then Shani’s aim is surely not a conventional narrative with neat closure. Rather, there’s a blossoming of sensations, memories, descriptions, around which we accumulate clues and possibilities. What emerges is a swirl of feeling and recollections following on from a violent accident that befalls the Ghost Child. The concluding note of affirmation acknowledges rather than contradicts fatality, yet it is distinctly affirmative. Shani has mentioned the strange, hallucinatory intensity of loss, the way the world around is still infused with intimations of the person no longer there, and that comes across in the monologues.  The architectonic sculptural installation, like a model of a vast archaeological site, comprises a network of platforms with a ritualised, ceremonial character (pyramids and related structures are evoked), laid out in the stylised outline of, presumably, the titular child. It is occupied by a number of relevant objects, including a mummified grandmother figure, and talismanic fragments and motifs: death masks, cosmic eggs, crystal balls, amulets. It’s also playful, it should be said, and delivered with a sensual relish.

In an interview with Laura Hensser conducted while she was writing Tragodía in 2018, Shani pointed to the work’s autobiographical genesis. Her immediate family, she noted, is now female (her father is no longer alive): her mother and her aunt. She does not intend to have children. Tragodía explores the intense bonds between them. Inverting her fear of losing mother and aunt, she imagines her own – the child’s – death, and the death of their common world of connection. It’s not a rejection: the final monologue is a paean in which the fading child professes her love for everyone and everything, for life.  Talking to Hensser, Shani was perhaps more explicit about where Tragodía leads than the work itself suggests: following the child’s death, the older women will kill themselves, and their cats. Not, again, out of despair, but acknowledging that their lives are complete. Her own mother Shani mentions, is inclined to discuss her life in such terms.

It’s not incidental that Shani's points out her family is now all female. She is a feminist and she is fascinated by the feminine

Shani was born in London to artistic, free-spirited parents, and grew up in alternative communities (including time in Israel and Goa). Creative activity was always part of her life. While still young she supported herself as a fashion photographer. Then, having endured some rejection from art schools, she gradually established herself as a fine artist, drawing on photography, performance, writing, installation and video.

It’s not incidental that she points out her family is now all female. She is a feminist and she is fascinated by the feminine. She has consistently explored ideas around feminine communities as alternatives to patriarchal and hierarchical structures, at every level. While she was interested to come across Christine de Pizan’s early feminist text, Book of the City of Ladies, from 1405, de Pizan’s propositions are, she found, on the modest side. But the whole concept of City of Ladies is vital to her thinking, and her work is aligned with feminist science fiction and fantasy.

Rather than, say, constructing feminist critiques of the patriarchy, she imagines entire lost or alternative feminist histories encompassing ways of thinking and making, community, myths, sexuality – pretty much everything. The linked monologues of Tragodía are not untypical. Her Dark Continent works allude to Freud’s characterisation of female sexuality as a dark continent, and set out to explore that lost or disregarded continent. She approaches that project, not uniquely, in terms of character and characters across vast spans of time and space. In terms of overall form and ambition, her work recalls the multivolume structure of fantasy or sci-fi stories and films. It’s a cliche to say of an artist that one never knows what they will do next, but it’s true of Shani. She has opened up many avenues of creative possibility for herself.