Setting boundaries in order to break through barriers 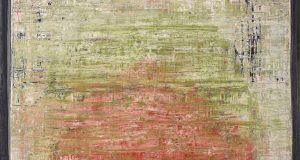 Sinéad Ní Mhaonaigh has mostly used spatial terms in a loosely metaphorical way as titles for her paintings, and groups of paintings. The work in her current exhibition is no exception. Teorainn evokes a limit or boundary. It is tempting, and reasonable, to see the use of such terms as a means of indicating the potential space and scope contained within the process of painting, and the tangible results of the process: the physical, visible object.

Ní Mhaonaigh is extremely attentive to the nature of the object – and it is an object rather than an image, in the screen-culture, depthless sense of the term. She applies paint thickly, apparently using a knife at least some of the time, probably a lot of the time, creating lush expanses of pigment and, in many paintings, physically scoring lines into those expanses.

There is nothing slapdash about her method, though. Using a palette knife can be associated with a kind of abandoned expressiveness, but not here. Ní Mhaonaigh’s compositions are notably precise, and she is also very precise about colour, for example organising each painting around a tight colour palette.

The balance between austerity and generosity in her work has been noted. Oil paint can be especially luscious, looking good enough to eat, and she relishes that quality. She has a fondness for dense, creamy whites – when it comes to painting in oil, white pigment, perhaps most famously the unfortunately toxic lead white, is a sort of magic ingredient, beloved by generations of artists. So Ní Mhaonaigh’s painting has this combination of sensual generosity and fine precision. Neither contradicts the other.

Boundaries are evident in one obvious sense in her recent work – and not alone the recent work. She often incorporates a frame, a border, in the painting. Not uniquely; Brian Bourke habitually does this and Howard Hodgkin is another example. The painted border is a boundary, a window frame through which we see the world, containing the burgeoning energies at work within – and there is a great deal of simmering energy in the Teorainn works. In the past, various communal interpretations of the central pictorial spaces were suggested by the titles: theatrical stages or platforms, altars, sports grounds, vast building structures, pilgrimage sites and more, all emerged as possibilities. Sites that are the focus of communal activity and meaning. Allusions to exile prompted notions of exclusion and inclusion.

Not that such motifs are explicitly employed, never mind represented. As Catherine Leech noted, she is a painter who suggests rather than represents. Never more so than now. In her new work, the boundary is all the more necessary given the relative dissolution of the motif in many paintings. It can seem dematerialised in a lush, lapping field of intermingled colour, recalling Monet’s Waterlilies or – another painter who comes to mind in relation to the work – Rothko’s luminous clouds of colour, or Basil Blackshaw’s late, exceptionally spare paintings of windows.

Ní Mhaonaigh’s work certainly allows many readings and interpretations, but it is fair to say that it is not prescriptive in intent. And at its heart is an exceptional investment in and love for the medium of paint.

A visit to New Artificiality is a mildly uncanny experience. Almost everything in Catherine Leutenegger’s images is recognisable and even ordinary. Everything is as it seems, and nothing is as it seems. A print the size of a cinema screen positions us before the open door of a mansion, one in a pastiche, banal-classical style. It is real, but it is also, as we are told, a 3D-printed building, which presumably makes it less real than a bricks-and-mortar construction. Presumably.

Several sections of the show highlight this issue. In fact, rather than being a photographic exhibition in the conventional sense, it is arranged as an installation, or a series of installations. As you exit one of the gallery’s smaller spaces the corner of the wall ahead of you, at first glance convincing, part of the fabric, turns out to be a photograph, of a section of wall – a 3D photocopied wall. Elsewhere there are close-up sections of ceiling mouldings, again copied.

A significant part of the work on view is of failed copies, sad and disturbing objects. Reduce everything to a stream of information and beware what happens when the information is interrupted, or disrupted or corrupted. Leutenegger is interested in emergent digital technologies and, more specifically perhaps, in what happens when that digital stuff comes back from the other, digital side and becomes material. That can be all too relevant when we are talking about printed prostheses, anatomical components that can be surgically incorporated in bodies. Also included are failed copies of sculptured or actual humans.

Perhaps the strangest element of the show, though, is a group of photographs dating back a decade or so. Welcome Home, Baby is a series of portraits of recently born babies. The photographs are real, the babies are dolls, made of polymer. Leutenegger’s work, that is to say, flags issues arising from the rise of digital simulation. Once you encounter it, you won’t be indifferent on those issues.