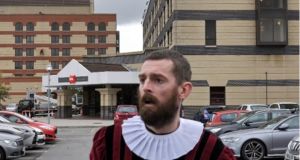 Following his exceptionally industrious time as director of Eva International, during which it was recast as Ireland’s International Biennial of Contemporary Art, Woodrow Kernohan moved on to become director of the John Hansard Gallery in Southampton. While based in Limerick, EVA’s home since its foundation in 1977, Kernohan was curator of Ireland at Venice – the Venice Biennale, that is, in 2015. The artist involved was Sean Lynch and the exhibition was titled Adventure: Capital. The heart of the exhibition was a film juxtaposing several widely different narrative strands, linked by Gina Moxley’s voiceover, delivered in the kind of reassuring tone one might use to spin a mythic yarn to a class of primary school pupils.

The chronological span of Lynch’s tall tale was huge, from the mists of pre-history to artistic minimalism, via tales of the gods, the building of cities and the vagaries of cultural schemes, with consistent attention to the flow of capital and the flourishing of capitalism. Lynch is a cultural archaeologist with a liking for the odd and anomalous. The fate of a John Burke abstract steel sculpture, once intended to occupy a roundabout in Cork, was but one of the strange, even surreal but entirely factual tales that fed into the overall picture.

Established in Southampton, Kernohan set about including a further project with Lynch in his programming, and the result is A Murmur, Repeated, which was on view at the Hansard Gallery from mid-July through September last year and is now at the Kevin Kavanagh Gallery in Dublin. The show is accompanied by a related publication, Bardlore/This is Bardcore, an essay by Kevin Barry. Rather than describing or interpreting Lynch’s work, Barry parallels it with what it seems fair to describe as a lively extemporisation on “bardic culture” in Ireland and its possible manifestations or derivations in the contemporary world. The dual title, incidentally, is matched by alternative covers.

As it transpires, while A Murmur, Repeated is not a repetition, it could well be a sequel to Adventure: Capital. In a new video (augmented by sculptural, photographic and drawn elements), performer Gina Moxley is joined by actor Timmy Creed in a tale that spans many centuries. It also takes a cue from its point of origin, the Hansard Gallery in Southampton. Filmed partly in Southampton, it also looks to a celebrated ancient site about an hour’s drive to the northwest, Stonehenge, again allowing Lynch to muse on the fortunes and meaning of cultural icons.

Stonehenge as a cultural phenomenon

It’s hard to imagine a more iconic archaeological structure than the megalithic monument of Stonehenge on Salisbury Plain. Despite what is known about the atone circle (originally an earthworks, then a ring of wooden posts, eventually, over several hundred years, a stone circle incorporating a particular stone quarried a great distance away and laboriously transported), and its undoubted relevance and significance to its builders and visitors throughout a considerable timespan, its uses and purposes remain largely in the realm of scholarly speculation, with little overall consensus.

Obviously, Lynch has no interest in exploring or adding to the vast store of speculation about Stonehenge and does not claim to offer any answers. What interests him is Stonehenge as a cultural phenomenon, how it has served as the focus for speculation and become an object of fascination. How, in fact, it has become part of the heritage industry, even as its actual meaning and function remain opaque.     So it is that an Irish bardic protagonist from some centuries past goes in search of Stonehenge but, as time becomes scrambled and confused, finds himself occupying the utterly perplexing, ultra commodified landscape of late capitalist England. That is, encountering an abandoned structure of another kind: a huge, closed-down toy store surrounded by a desolate, empty car park, with strangely ritualistic marks inscribed on expanses of tarmac. Then there are generic hotel chains (with their own kind of rituals), accommodating the endless streams of heritage tourists who are processed through the Stonehenge experience, acquiring Stonehenge Rocks tee-shirts and other branded merchandise as they go.

In many ways, the import of A Murmur, Repeated echoes the conclusion of Adventure: Capital. Natural materials and resources, ideas of the sacred and intrinsic value, all are absorbed and assimilated by a system that prioritises the flow of capital above all else. The bardic sensibility can make no sense of a world in which a symbolic monument, the fruit of vast, selfless effort and ingenuity, reflective of transcendent value, is transformed into an object of trivial, money-generating entertainment. A communal space that belonged to the people has been taken away and sold back to them.

Another of Lynch’s projects in 2019, The Rise and Fall of Flint Jack, offers another view of this issue. Flint Jack was a 19th century Yorkshire miscreant who set about manufacturing fake fragments of the past because they had become valuable. He managed to sell quantities of supposedly megalithic axe heads, ancient ceramics and carvings, all of which he had made himself. Many made their way into museums and, the suggestion is, some may be there still.