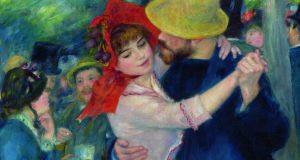 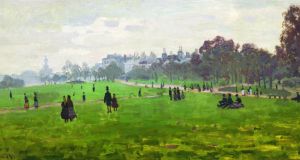 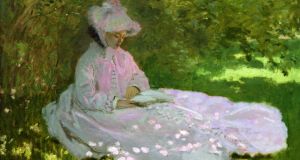 The Reader (1872) by Claude Monet. Copyright The Walters Museum, Baltimore 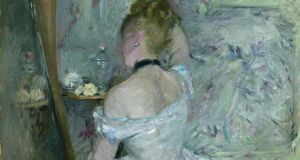 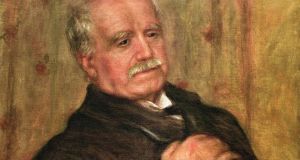 In one of the ironies of art history, the great French art dealer Paul Durand-Ruel “discovered” Impressionism in London in January 1871 because he, Claude Monet and Camille Pissarro had sought refuge there from the Franco-Prussian war. In another twist, the gallery on New Bond Street where Durand-Ruel exhibited French painters was called the German Gallery.

With its muddy grass, grey but luminous sky and barely sketched, dark silhouetted figures, Monet’s Green Park, painted during his year of exile, still embodies London. Green Park is one of more than 90 works either owned or traded by Durand-Ruel that are on exhibition at the Musée du Luxembourg in Paris. The same exhibition will travel to the National Gallery in London in March 2015, then to the Philadelphia Museum of Art from late June.

A few days after Durand-Ruel met Monet, Pissarro dropped off a canvas in the dealer’s absence. “You left me a charming painting and I regret not having been in the gallery to pay you compliments in person,” Durand-Ruel wrote to the struggling painter. “Please tell me how much you would like for it, and be kind enough to send me more as soon as you can.”

The note was typical of Durand-Ruel, who, for the next four decades, would be more than an art dealer to Impressionist painters. He was also their patron, sometimes lodging and feeding “his” painters, and an endless source of encouragement. “I win a little ground each day, and we shall triumph in the end,” he wrote to Monet in 1886.

Back in Paris after the war, Monet and Pissarro introduced Durand-Ruel to Degas, Renoir and Sisley. “Durand-Ruel was a missionary,” Renoir said. “Fortunately for us, painting was his religion.”

“Without Durand, all of us Impressionists would have starved,” said Monet. “We owe him everything. He was stubborn, persistent. He risked bankruptcy many times to support us. The critics dragged us through the mud, but it was much worse for him! They wrote, ‘These artists are mad, but the dealer who buys them is more mad than they are’.”

Durand-Ruel was a monarchist and devout Catholic. Widowed at 40, he raised five children alone, and gambled everything on Impressionism. In a country politically polarised since the revolution, he was broadminded enough to support the communard Courbet, the anarchist Pissarro and the republican Manet.

Durand-Ruel turned his 300sq m apartment at 35 Rue de Rome into a private gallery, where he proudly showed the 370 paintings of his personal collection. Economic crisis forced him to stop purchasing paintings from 1874 until 1879. He nonetheless hosted the second Impressionist exhibition in 1876.

Monet’s Woman Reading, or Spring, in which the painter’s wife, Camille, sits beneath a tree with her skirts spread around her, was shown in the 1876 exhibition. The painting was purchased by the American Impressionist Mary Cassatt and now belongs to the Walters Art Museum in Baltimore. Emile Zola described it as a “portrait of a woman dressed in white, sitting in the shadow of foliage, luminous patches dappling her dress like drops of water”.

Five exhibitions in a year

In 1883, Durand-Ruel devoted five individual exhibitions to Boudin, Monet, Renoir, Pissarro and Sisley. “In those days, individual shows were usually posthumous tributes,” says Sylvie Patry, chief curator of painting at the Musée d’Orsay and co-commissioner of the Durand-Ruel exhibition. “At first, the painters were afraid the critics might be even harsher if they showed a lot of paintings . . . Durand-Ruel believed one-man shows would enhance the artists’ reputations. He wrote to Monet, saying: ‘You must show you have an oeuvre, that you’re a serious painter.’ ”

In spring 1891, Monet began a series of 24 paintings of poplar trees near his home at Giverny, at all hours and in all seasons. Durand-Ruel exhibited all but one of Monet’s series. “Thus develops a changing and harmonious poem, with nuanced phrases, so closely linked that one has the sensation of a single work of inseparable parts,” wrote the art critic Gustave Geffroy.

The Musée du Luxembourg has brought together three paintings from Monet’s poplars series, from museums in London, Paris and Philadelphia, to breathtaking effect.

To France’s eternal embarrassment, American art collectors first recognised the genius of Impressionism. The French art establishment was so conservative that when Gustave Caillebotte left his collection of 67 Impressionist paintings to the state in 1894, half were rejected.

Durand-Ruel succeeded first in the US, with a landmark exhibition in New York in 1886. “Don’t believe Americans are savages,” he wrote to the painter Henri Fantin-Latour. “On the contrary, they’re less ignorant and predictable than French art lovers.”

Durand-Ruel introduced American industrialists to Impressionism. “They had a lot of money, had not inherited old collections like rich French people, and were new to the art market,” says Sylvie Patry. “He became close to the Havemeyers in New York, the Potter Palmers in Chicago and Alexander Cassatt [Mary Cassatt’s brother] in Philadelphia. They were opinion leaders. It had a snowball effect.”

Berthe Morisot’s Femme à sa toilette was considered one of the most beautiful paintings in the 1886 New York exhibition. In it, a woman seated before a mirror lifts a graceful arm to arrange her hair, her dress slipping off one shoulder. Durand-Ruel showed the same painting 19 years later at the Grafton Gallery in London. To this day, says Patry, the 1905 London show remains “the biggest, most important Impressionist exhibition ever organised”, bringing together 315 masterpieces.

The exhibition at the Musée du Luxembourg will also go down in history, as a long overdue tribute to the man who broke the monopoly of the Académie des Beaux Arts and the official salon, and attained recognition for Impressionism. Without Durand-Ruel, the coherence of Impressionism as a movement might not have been appreciated.

More than half the works have been borrowed from foreign museums and private collections.

Durand-Ruel’s “true quality”, Renoir said, was his “love of art and the defence of artists before their death”. Durand-Ruel was a scion of the Paris grande bourgeoisie, while Renoir was the son of a tailor and a seamstress who began his career as an apprentice porcelain painter at 13 years old. Despite the difference in social class, the two men maintained a warm friendship. It is fitting that the exhibition opens with portraits of Durand-Ruel and his five children by Renoir. Durand-Ruel waited until he was 69 years old, successful and serene, before sitting for his portrait.

The exhibition closes with three exquisite dance paintings by Renoir: two from the Musée d’Orsay and one from the Boston Museum of Fine Arts. They show Renoir at his best, as the painter of happiness. Dance at Bougival is one of the Boston Museum’s most prized paintings and is rarely loaned, so this is a rare chance to see his three variations on a theme, side by side.

Paul Durand-Ruel exhibition is at the Musée du Luxembourg, Paris, until Feb 8, 2015

ALSO IN PARIS: FOUR OTHER EXHIBITIONS TO SEEK OUT

One World: Together at Home – the Irishman who helped get Lady Gaga to say yes
5

Love Wedding Repeat: You should avoid this ‘Four Weddings’ rip-off
10