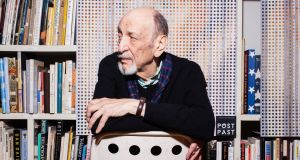 Milton Glaser, a graphic designer who changed the vocabulary of American visual culture in the 1960s and 1970s with his brightly coloured, extroverted posters, magazines, book covers and record sleeves, notably his 1967 poster of Bob Dylan with psychedelic hair and his I ♥ NY logo, died on Friday, his 91st birthday, in Manhattan.

His wife and only immediate survivor, Shirley Glaser, said the cause was a stroke. He also had renal failure.

Glaser brought wit, whimsy, narrative and skilled drawing to commercial art at a time when advertising was dominated by the severe strictures of modernism on one hand and the cosy realism of magazines like the Saturday Evening Post on the other.

At Push Pin Studios, which he and several former classmates from Cooper Union, the art, architecture and engineering college, formed in 1954, he opened up design to myriad influences and styles that began to grab the attention of magazines and advertising agencies, largely through the studio’s influential promotional publication, the Push Pin Almanack (later renamed Push Pin Monthly Graphic).

“We were excited by the very idea that we could use anything in the visual history of humankind as influence,” Glaser, who designed more than 400 posters over the course of his career, said in an interview for the book The Push Pin Graphic: A Quarter Century of Innovative Design and Illustration, from 2004.

“Art Nouveau, Chinese wash drawing, German woodcuts, American primitive paintings, the Viennese secession and cartoons of the ’30s were an endless source of inspiration,” he added. “All the things that the doctrine of orthodox modernism seemed to have contempt for – ornamentation, narrative illustration, visual ambiguity – attracted us.”

Glaser delighted in combining visual elements and stylistic motifs from far-flung sources. For a 1968 ad for Olivetti he modified a 15th-century painting by Piero di Cosimo showing a mourning dog and inserted the Italian company’s latest portable typewriter at the feet of the dead nymph in the original artwork.

For the Dylan poster, a promotional piece included in the 1967 album Bob Dylan’s Greatest Hits, he created a simple outline of the singer’s head, based on a black-and-white self-portrait silhouette by Marcel Duchamp, and added thick, wavy bands of colour for the hair, forms he imported from Islamic art.

Nearly six million posters made their way into homes across the world. Endlessly reproduced, the image became one of the visual signatures of the era.

I ♥ NY, his logo for a 1977 campaign to promote tourism in New York State, achieved even wider currency. Sketched on the back of an envelope with red crayon during a taxi ride, it was printed in black letters in a chubby typeface, with a cherry-red heart standing in for the word “love”. Almost immediately, the logo became an instantly recognised symbol of New York City, as familiar as the Empire State Building or the Statue of Liberty.

“I’m flabbergasted by what happened to this little, simple nothing of an idea,” Glaser told the Village Voice newspaper in 2011.

After the terrorist attacks of September 11th, 2001, T-shirts emblazoned with the logo sold in the thousands, as visitors to the city seized on it as a way of expressing solidarity. Glaser designed a modified version – I ♥ NY More Than Ever, with a dark bruise on the heart – which was distributed as a poster throughout the city and reproduced on the front and back pages of the Daily News on September 19th that year.

When Milton was a young boy, an older cousin drew a bird on the side of a paper bag to amuse him. “Suddenly, I almost fainted with the realisation that you could create life with a pencil,” he told Inc magazine in 2014. “And at that moment I decided that’s how I was going to spend my life.”

He took drawing classes with Raphael and Moses Soyer, the social-realist artists, before enrolling in the High School of Music & Art in Manhattan (now the Fiorello H LaGuardia High School of Music & Art and Performing Arts). After twice failing the entrance exam for Pratt Institute, a private New York university, he worked at a package-design company before being accepted by the Cooper Union for the Advancement of Science and Art.

While at the Cooper Union, he and three classmates – Seymour Chwast, Edward Sorel and Reynold Ruffins – rented part of a loft in Greenwich Village and created a company, Design Plus. They completed one project: cork place mats with a silk-screened design, which they sold to Wanamaker’s department store.

After graduating from the Cooper Union in 1951 and working in the promotion department at Vogue magazine, Glaser won a Fulbright scholarship to the Academy of Fine Arts in Bologna, Italy, where he studied etching with the still-life painter Giorgio Morandi and, in the time-honoured way, drew from plaster casts. The experience left him a fervent believer in the discipline of drawing and an enemy of found images and collage in design work.

“A designer who must rely on cutouts and rearranging to create effects, who cannot achieve the specific image or idea he wants by drawing, is in trouble,” he told the magazine Graphis in 1960.

Returning to New York, Glaser resumed his partnership with his former classmates, who had created the Push Pin Almanack to advertise their work and allow them to experiment. When they founded Push Pin Studios in 1954, Glaser was named its president. The studio quickly became recognised for its bright colours, surreal juxtapositions and exaggerated, flattened forms, seen in book jackets (Glaser designed all the covers for the Signet Classic Shakespeare series), magazine illustrations, record covers, television commercials and typography.

He married Shirley Girton, his replacement at the package-design company that first hired him, in 1957. The couple collaborated on the children’s books If Apples Had Teeth, from 1960, The Alphazeds, from 2003, and The Big Race, from 2005. They lived in Manhattan and Woodstock, in New York State.

Glaser, whom Newsweek once called “one of the few geniuses in the image-making trade”, was widely credited with creating the pudgy, cartoony style known as Yellow Submarine art, popularised by the 1968 animated Beatles film but practised at Push Pin since the late 1950s.

Glaser joined forces with the editor Clay Felker in 1968 to found New York magazine, where he was president and design director until 1977, imposing a visual format that still largely survives. With his friend Jerome Snyder, the art director of Scientific American magazine, he wrote a budget-dining column, The Underground Gourmet, for the New York Herald Tribune and, later, New York magazine. The column spawned a guidebook of the same name in 1966 and The Underground Gourmet Cookbook in 1975.

Glaser started his own design firm, Milton Glaser Inc, in 1974. A year later he left Push Pin, just as he was being given his own show at the Museum of Modern Art in New York.

“At a certain point we were accepted, and once that happens everything becomes less interesting,” he said in an interview for Graphic Design in America: A Visual Language History, an exhibition at the Walker Art Center in Minneapolis in 1989.

He was hired by the British tycoon James Goldsmith in 1978 to redesign the interiors, exteriors and packaging of the Grand Union chain of supermarkets, which Goldsmith had just acquired. Glaser designed several projects for the restaurateur Joe Baum, most memorably the Big Kitchen food court on the ground-floor concourse of the World Trade Center, the 1990s redesign of Windows on the World there and the Rainbow Room at Rockefeller Center.

In 1983, with Walter Bernard, Glaser formed WBMG, a publication-design firm that revamped dozens of newspapers and magazines in the United States and abroad, including the Washington Post and, in Brazil, O Globo. He and Bernard later collaborated on a history of their design work, Mag Men: 50 Years of Making Magazines, which was published in December.

He managed to stay current. In the late 1980s he designed the Aids logo for the World Health Organization and the logo and packaging for Brooklyn Brewery, using a capital B inspired by the old Brooklyn Dodgers. He designed a logo for Angels in America, Tony Kushner’s Pulitzer Prize-winning play, and posters for Vespa’s 50th anniversary in 1996 and for the final season of the television series Mad Men in 2014.

Glaser, whose other books include The Milton Glaser Poster Book, from 1977, Art Is Work, from 2000, and Drawing Is Thinking, from 2008, taught for many years at the School of Visual Arts in Manhattan. He was the subject of the 2008 documentary film Milton Glaser: To Inform and Delight.

In 2004 he received a lifetime-achievement award from the Cooper-Hewitt National Design Museum (now the Cooper Hewitt, Smithsonian Design Museum), and in 2009 he became the first graphic designer to receive the United States’ National Medal of Arts.

“I’m a person who deals with visual material whatever it is – architecture, an object, a set of plates, wallpaper – right now I’m doing T-shirts,” he told Aileen Kwun and Bryn Smith for their book Twenty Over Eighty: Conversations on a Lifetime in Architecture and Design, from 2016. “I know a lot about the way things look, and as a consequence I try to see how much of that world I can embrace.” – New York Times