How Joaquín Sorolla, Spain’s ‘master of light’, blazed a trail to the US

Sorolla became famous for his Valencian shoreline scenes and portraits of American high flyers, including a president 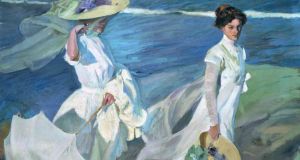 A detail from Walk on the Beach (1909) by Joaquín Sorolla. Courtesy of the Sorolla Musuem 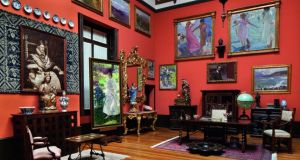 The Valencian impressionist Joaquín Sorolla y Bastida was one of Spain’s best-loved artists. Although he enjoyed success in Europe (he won the Grand Prix and Medal of Honour at the Universal Exhibition in Paris, and Spain’s equivalent honour in 1899), it was in the US that his career really took off. There he quickly became feted as one of the greatest exponents of European impressionism as well as an outstanding portrait artist.

Like most artists of the era, he painted captivating scenes of the lives of ordinary people and places, but it is his mastery of light that most defined his work. Claude Monet described Sorolla as “the master of light”.

An exhibition of his work, Sorolla and the United States, is about to close at the Fundación Mapfre in Madrid. There is also plenty more of the great man’s work to admire in Madrid between the Sorolla Museum and Prado museums.

Beginning with one of Sorolla’s trademark giant paintings of a beach scene, called Sad Inheritance, the exhibition describes how this dramatic masterpiece of light, anatomy and movement of the sea became his calling card for a number of influential patrons who were to become an important conduit in his career.

Irish-American Thomas Fortune Ryan was one of the first to jump into the world of Sorolla. He commissioned a portrait of Christopher Columbus to mark the 500th anniversary of the discovery of America.

Sorolla went to Valencia, from where Columbus had sailed, and produced a series of nine oil sketches as well as the finished product, using a direct descendant of the famous explorer as a model and a life-size mock-up of the Santa Maria. Ryan bought the lot and all are on display in the Fundación Mapfre.

From then, Sorolla’s star rose in meteoric style, thanks to a number of sell-out exhibitions in the US and a flurry of commissions.

A millionaire railroad magnate with a fascination for Spanish culture became his most important patron. Archer Huntington commissioned several works from Sorolla and introduced him to the cream of the rising upper classes of American society.

From 1908 onwards, Sorolla became established as the foremost portrait painter in the US. He produced a number of paintings for the new American aristocracy, including a portrait of William Howard Taft, who was then the president.

But it is Sorolla’s beach shoreline scenes under the hot Valencian sun that made him famous, seducing American society and eliciting admiration from his peers, as well as making him and his family wealthy.

The Mapfre exhibition features some of the very best of Sorolla’s work, gathered from various private American collectors. There are also preparatory sketches, including a fascinating series of gouache drawings of views from his lodgings in New York. They are vivid snapshots of the city in the early 1900s. “Definitely, America was his future,” says Covadonga Pitarch, curator of the Sorolla Museum in Madrid.

She says Sorolla’s wife, Clotilde, was the marketing professional and held the purse strings. Clotilde donated the house and its artistic contents to the Spanish state after her husband’s death, and it now houses the Sorolla Museum.

Walking through the house feels like a privilege. The place seduces from the word go, as you meander through the beautiful gardens to find the main entrance.

From the first room, where some of his better-known pieces are kept, you are reminded of the fact that he was a devoted family man. There are portraits of his wife, three daughters and son everywhere. There are paintings of the Sorolla family at the seaside in Valencia, by the beach in Galicia, relaxing in the house or the garden, running or skipping rope. All are painted with a quick hand. Some of those of huge dimensions were made using brushes with homemade extensions.

Sorolla also produced frescoes and he painted a beautiful series of them on the ceiling and upper parts of the walls of the dining room of the house, depicting fruits and his family.

There are several studies and sketches illustrating the fastidious attention to detail with which he treated his compositions and showing how he practised techniques on how to best portray the elements’ play on boats, sails and human bodies.

His double-height studio contains a lot of unfinished work, including most poignantly his last incomplete painting. It is set on an easel with his paints and brushes to the side. He had been painting it in the garden when he collapsed from a brain aneurysm that left him incapacitated until his death three years later in 1923, at the age of 60.

Sorolla and the United States is at the Fundación Mapfre, Madrid, until January 11th

Dr James Barry: the Irishwoman who fooled the British Empire
9