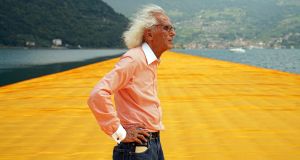 Christo and Jeanne-Claude: the artist at The Floating Piers, on Lake Iseo, in Italy, in 2016. Photograph: Wolfgang Volz

The artist Christo, known for wrapping the Reichstag, in Berlin, and other buildings, and for swathing areas of coast and entire islands in fabric, has died aged 84. The news was confirmed on his official Facebook page, which said that he died of natural causes at his home in New York.

Born Christo Vladimirov Javacheff in Bulgaria, Christo studied in Sofia and then defected to the West in 1957, stowing away on a train from Prague to Vienna. Two years later he met Jeanne-Claude Denat de Guillebon, the Frenchwoman who would become his artistic partner and wife until her death, in 2009.

The couple embarked on their career of large-scale public artworks in 1961, when they covered barrels at the Port of Cologne. Barrels would feature heavily in their artworks, because of their low cost and sculptural appearance, along with an implied political connotation always downplayed by the artists. “I make things that have no function – except maybe to make pleasure,” Christo said in 2018.

The following year they barricaded a street in Paris with oil barrels. Called Rideau de Fer, or Iron Curtain, it put them on the map in the art world, and they went on to be represented by the famous Castelli gallery in New York.

The couple went on to create large-scale works that often involved swathing vast natural monuments in fabric, aligning them to the American land artists of the early 1970s, who created vast artworks in the desert. In 1969 Christo and Jean-Claude (as Christo billed their works after his wife’s death) embarked on Wrapped Coast, which involved shrouding the coast and cliffs of Little Bay in Sydney, Australia, in grey fabric, to create what was the largest single artwork of the time.

In 1972 they made Valley Curtain, erecting a 14km orange curtain across Rifle Gap, a canyon in Colorado, although a storm destroyed it only a day after it was hung. All Christo and Jean-Claude’s artworks were designed to be temporary. “Artists – and above all architects – seek permanence,” he said. “I don’t. I like leaving nothing. That takes courage.”

His work was funded mainly by selling preparatory drawings – he always refused any sponsorship. “We have always been good at negotiating. And we needed to be, otherwise these projects would never have been realised. But we have always been very good at getting banks to supply lines of credit.”

By the 1980s Christo and Jean-Claude’s ambitions and reputation had grown to the extent that they were able to pull off projects including surrounding 11 islands in Biscayne Bay, in Miami, with bright-pink floating polypropylene fabric, and wrapping Pont Neuf, the oldest bridge in Paris, after the then-mayor, Jacques Chirac, gave his permission. Yet the artists’ most spectacular achievement arguably came in 1995, when they pulled off Wrapped Reichstag, covering the German parliament building in Berlin in aluminium fabric, less than six years after the fall of the Berlin wall.

“It was one of the most beautiful things I have ever seen,” Christo said. “A hundred rock climbers abseiling down the facade of the Reichstag, slowly unfurling this huge silvery curtain. There were no cranes or machinery, just people descending in a kind of aerial ballet. It was 1995, and huge crowds came to watch. Then, when it was finished, they came up to stroke the fabric.” Keen not to cheapen the artwork, Christo forbade the Three Tenors to perform a concert in front of it.

Further projects included the Gates, which saw structures with billowing saffron vinyl erected throughout Central Park in New York, and The Floating Piers, at Lake Iseo, in Italy. In the summer of 2018 Christo floated a stack of 7,506 barrels on the Serpentine in Hyde Park in London. The work, called Mastaba, delighted and baffled viewers. “It will belong to everyone until it’s gone,” the artist said. “It will be a landmark for a few months.”

The artist’s office released a statement: “Christo lived his life to the fullest, not only dreaming up what seemed impossible but realising it. Christo and Jeanne-Claude’s artwork brought people together in shared experiences across the globe, and their work lives on in our hearts and memories.”

A planned work, L’Arc de Triomphe, Wrapped, will be made posthumously, in accordance with both artists’ wishes, in Paris in September next year. – Guardian