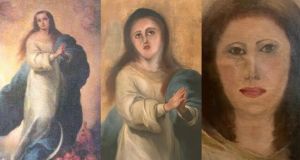 Conservation experts have called for a tightening of the laws covering restoration work after a copy of a famous painting by the baroque artist Bartolomé Esteban Murillo became the latest in a long line of artworks to suffer a damaging and disfiguring repair.

A private art collector in the Spanish city of Valencia was reportedly charged €1,200 by a furniture restorer to have the picture of the Immaculate Conception cleaned. But the job did not go as planned, and the face of the Virgin Mary was left unrecognisable despite two attempts to restore it to its original state.

The case has inevitably resulted in comparisons with the infamous “Monkey Christ” incident, eight years ago, when a devout parishioner’s attempt to restore a painting of the scourged Christ on the wall of a church on the outskirts of the northeastern Spanish town of Borja made headlines around the world.

Parallels have also been drawn with the botched restoration of a 16th-century polychrome statue of Saint George and the dragon in northern Spain that left the warrior saint resembling Tintin or a Playmobil figure.

Fernando Carrera, a professor at the Galician School for the Conservation and Restoration of Cultural Heritage, says such cases highlight the need for work to be carried out only by properly trained restorers. “I don’t think this guy – or these people – should be referred to as restorers,” he says. “Let’s be honest: they’re bodgers who botch things up. They destroy things.”

While restorers were “far less important than doctors”, he adds, the sector still needs to be strictly regulated for the sake of Spain’s cultural history. “We see this kind of thing time and time again, and yet it keeps on happening. Paradoxically, it shows just how important professional restorers are. We need to invest in our heritage, but even before we talk about money we need to make sure that the people who undertake this kind of work have been trained in it.”

María Borja, one of the association’s vice-presidents, also says incidents such as the Murillo mishap are “unfortunately far more common than you might think”. Speaking to Europa Press, which broke news of the Murillo repair, she added: “We only find out about them when people report them to the press or on social media, but there are numerous situation when works are undertaken by people who aren’t trained.” Amateur interventions “mean that artworks suffer, and the damage can be irreversible”.

Carrera says Spain has a huge amount of cultural and historical heritage because of all the groups that have passed through the country over the centuries, leaving behind their marks and monuments. Another part of the problem, he adds, is that “some politicians just don’t give a toss about heritage”, meaning that Spain does not have the financial resources to safeguard all the treasures of its past. “We need to focus society’s attention on this so that it chooses representatives who put heritage on the agenda,” he says.

“It doesn’t have to be at the very top, because it’s obviously not like healthcare or employment – there are many more important things. But this is our history.” – Guardian