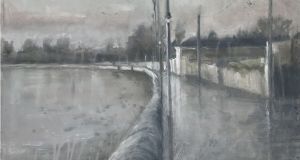 Bernadette Kiely is best known as a painter with a particular textural flair. Over the years she has added a variety of materials – such as wax, coral, even rope netting – to paint.

Talking to Jo Allen some years ago, Kiely recalled a moment from childhood when her sister, spying strands of hair protruding from the wall, concluded that there was a body embedded within it. In a way she was right. Horse hair had been used to bind the plaster. In retrospect, Kiely saw in this a useful metaphor for painting: a surface, but with something embedded within it.

Given the emphasis on texture, it may seem strange that Kiely’s latest show, One Touch of Nature Makes the Whole World Kin, must be encountered virtually rather than by actually visiting Taylor Galleries.

The title is a quote. The speaker is Ulysses, addressing Achilles in Shakespeare’s Troilus and Cressida. Kiely’s touch of nature is in all likelihood coronavirus, which has had the effect of engendering widespread solidarity and inspired exceptional levels of communal effort – as well as more or less the opposite in some quarters. Shakespeare’s implication is less benign than the quote sounds when it is taken in isolation: Ulysses is noting the human impulse to latch on to the latest fad.

The more recent, lockdown-era work in her exhibition continues long-term preoccupations and merges seamlessly with what has gone before

Kiely is definitely not being cynical about it, nor is she being opportunistic with her implied reference to the pandemic. In fact the more recent, lockdown-era work in her exhibition continues long-term preoccupations and merges seamlessly with what has gone before.

She grew up in Carrick-on-Suir, Co Tipperary, and has for several decades lived and worked in Thomastown, Co Kilkenny, on a bank of the river Nore. Two towns, two rivers sharing a reputation for flooding. When over the years she travelled between Carrick and Thomastown, Kiely followed the minor, rural road, and grew fond of the agricultural landscape, an endless network of fields. She grew accustomed to tracing their changes in temper through the year, often dramatic changes in hedgerows, crops and pasture.

Her path to painting was circuitous. She first studied graphic design, or visual communications as it is now called. She was also drawn towards architecture. After art school she worked in graphic design in London and also for a time in New York. Back in Ireland she became administrator of the Butler Gallery, long located in the basement of Kilkenny Castle, and currently due to open – whenever possible – in its new location, the refurbished Evans’ Home on John’s Quay.

The Butler is a relatively small gallery that has never been afraid to think big, notching up a string of significant shows over the years, largely due to good curatorial staff and a fine board (which included, for many years, the artist Barrie Cooke).

Kiely found the environment enlivening and, more, the experience sharpened her interest in making paintings. Her work initially drew on her graphic arts experience, with a strong sense of design and bold, high-key colours. Gradually her palette became more muted, inclining towards earth hues, though the underlying strong linear armature endured. And she increasingly used impasto.

This was, in a real sense, a period of apprenticeship. Barrie Cooke was a neighbour in Thomastown and became a good friend. He offered advice but also told her to find her own path. He was, famously, a painter of water and flow, and his influence is apparent in the important shift in her work towards openness and expanses, away from rigid line.

In a sense she found her way by looking to the riverine landscapes that she knew, and the shoreline she had visited with her family as a child. All of which opened a way to the elemental quartet of air, water, earth and fire. She turned her attention to skies. If that sounds calculated, it shouldn’t. Kiely is someone who has discovered what interests her as she goes along, rather than setting out with any agenda. That still holds true.

She found, for example, that she was interested in the essential instability of things. Seasonal fires ignited to clear fields were an ideal subject. Rather than mapping out a plan, she will find herself suddenly taken by a glimpse in the corner of her eye while driving and stop. While Kiely draws (making entire bodies of work as drawings rather than paintings, for example), photography has consistently been a basic way of sketching for her, and a photograph taken in transit can spark a painting or several.

A concern with the passing of time emerged in her accounts of how human lifespans are marked out in the rhythms of diurnal and seasonal cycles. It wasn’t that she set out to ask: what is time? It just made itself felt through observation. In the pattern of routine – daily walks, seasonal change, birth, death and renewal – Kiely was also alert to change, and inevitably the exceptions to the rule made themselves felt in her work – for example, strange weather, unusual flooding.

While there is an almost autobiographical aspect to Kiely’s work, largely given her responsiveness to her environment, she is not at all fixated on place as essence and homeland. She responds as keenly to north Mayo or Donegal as to the Nore and its surrounding landscape at Thomastown. In addressing the floods of recent memory she sourced imagery online as well as outside her own front door.

One series reminds us of something Kiely doesn’t advertise: her technical expertise

Kiely’s most recent work is a reflection of current times. It has long been her habit to take circuitous walks around Thomastown and the locality. A series of small-scale paintings of illuminated windows at night, seen in passing, evoke the distancing and isolation that have become routine.

They remind us of something Kiely doesn’t advertise: her technical expertise. In this, they recall both Edward Hopper’s icons of urban loneliness and the remarkable paintings made by Thomas Jones in Italy in the late 18th century, virtuoso studies of buildings in Naples that look as if they were made yesterday.

Mild-mannered he may be, but Matt Cooper will go 10 rounds with anyone
10