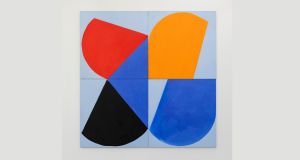 What is it?
Quebec is an oil painting by Richard Gorman.

How was it done?
It was painted in oil on linen, in a thoroughly traditional way. The artist is technically meticulous and very careful about the quality of materials he uses.

Where can I see it?
It is included in Gorman’s new exhibition, dalkey, on show at the Kerlin Gallery (kerlingallery.com) until April 9th. The show’s title is a reference to where the painter has been living and working for some time.

Is it a typical work by the artist?
Gorman is well known for his spare, hard-edged, abstract arrangements of flat colour and forms. They are not representations per se. The link between image and title is not intended in any illustrative sense. In fact Gorman is notably wary about any such line of interpretation. The great Danish artist Per Kirkeby, who died a couple of years ago, was famously reluctant to discuss his work in terms of meaning. His attitude stood out in an age where the artist’s statement and the curatorial interpretation, or explanation, have become ubiquitous. Kirkeby never relented, as witness his uncompromising observation: “I’m a painter and have painted a painting. And really, I don’t want to say anything more about it.”

One feels that Gorman is a kindred spirit. He has noted, in the past, that a painting is inevitably made in a context, not a vacuum, and the context in every sense informs the work. Born in Dublin, he first studied business at Trinity and later found his way to Dún Laoghaire School of Art and Design. He was from the start an exceptionally capable, independent-minded painter. His early work was relatively busy, well-worked, packed with incident, and his distinctive feel for colour, texture and form was unmistakable.

He progressively simplified each aspect, gravitating towards areas of flat colour defined by intersecting, geometric motifs. Often his palette had, and has, a slightly retro, classical modernist aura, cool in mood. He was based in Milan for many years, and he built up a strong relationship with Japan. Besides showing his paintings in several substantial exhibitions there, he worked with traditional Japanese paper makers and devised a method of mixing colour directly into paper pulp to create extraordinary, subtly sculptural paintings. In 2015 Hermés, having seen his work on the website of his friend and fellow painter Nathalie du Pasquier, enlisted him in a collaboration to design a carré scarf. The scarves that resulted have the collective title Squeeze. His major solo shows include those at the RHA Gallagher Gallery, the MAC Belfast, Castletown House and other venues.