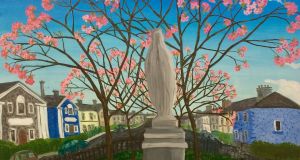 Magic Words is a 2019 painting by Kathy Tynan

Tynan is a relative rarity in the contemporary art world: a representational painter. More, she is an observational painter, responding to her surroundings – home, studio, the fabric of the city around her, encounters and relationships. That is, one might say, her emotional surroundings, encompassing not only her own feelings and experience in any particular context, but the network of connections invested in the moment. While she is a representational painter she is not absorbed by optical accuracy. Rather, she uses paint in a direct, unaffected way.

Magic words is included in Two Painters – Kathy Tynan and Andrew Vickery, at Highlanes Gallery, Laurence St, Drogheda, until Saturday, April 11th. An opening conversation, between the artists and writer and critic Rebecca O’Dwyer, who has written an essay to accompany the show, takes place at Highlanes at 3pm, Saturday, February 1st, see eventbrite.ie and highlanes.ie.

It is typical. Two propositions from Ludwig Wittgenstein seem appropriate to Tynan’s work, both contained in his Philosophical Investigations. One, his invocation “Don’t think, but look!”. The other his famously ambiguous: “Philosophy is a battle against the bewitchment of our intelligence by means of language”, potentially identifying language as being simultaneously part of the problem and part of the solution.

Certainly, Tynan’s work gained traction when she prioritised looking and noticing. In interviews she has described how, having studied fine art and graduated from NCAD, she had difficulty painting. Her solution was to return to academia, immerse herself in theory, and to set about writing, a process that, oddly enough, proved to be a catalyst for her painting. In other words, she did not, as many do, disappear entirely into the beguiling world of critical theory.

Although, as she has noted, she tries to paint without artifice, as though seeing something for the first time and responding to it, her work does not shy away from complexity. Observers have commented, for example, on her liking for allusive, often literary and/or puzzling titles that prompt questions about what we are seeing and its possible layers of meaning. You could say the titles are complementary rather than descriptive, or that they are a legitimate part of the work. Both these things seem true. She wants to see things clearly but not suggest a contrived or forced simplicity.

She is not remotely hung up on genre in the academic sense, and the breadth of her painting is consistently refreshing and stimulating. A glance through her work will confirm her Dublin background; detailed accounts of specific parts of the city have been a constant thread. She has worked elsewhere, apparently quite happily and effectively, and she has shown widely, including regularly at the Kevin Kavanagh Gallery in Dublin, building up a wide and appreciative following. Reproductions of a number of paintings are published in a book, Proud and Strong All Day Long. They accompany – but do not illustrate – a short story by Ingrid Lyons, who also writes on art.

Brigitte Nielsen on giving birth at 54: ‘I was trying until there were no embryos left’
Real news has value SUBSCRIBE