Art in Focus: Daphne Wright - Is everyone ok? 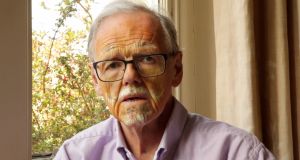 An image from Is everyone ok? by Daphne Wright

It is a video centred on a single character: an older man (with perhaps just a faint, coincidental resemblance to Jeremy Corbyn). He appears in relatively good shape, but there is a certain frailty about him, and his expression is slightly troubled. And his face is painted “like a lion”. He plays out two contrasting roles, alternating the bland, team-building cliches of management-speak with, in response to questions, more personal observations about his wife’s health.

It is included in Daphne Wright: A quiet mutiny at the Crawford Art Gallery (Emmet Place, Cork, until February 16th crawfordartgallery.ie), a major exhibition of new work by the artist.

It is, though given that Wright works across a bewildering range of forms and materials, it may seem odd to describe any one piece as typical. Her concerns, though, are consistent. She is an observer, and she observes people as social animals, with an quizzical eye to the codes, conventions and structures within which we live. Individuals’ roles, and their relationships to those organisational systems, change as life proceeds, and it has been noted that Wright tends to focus on moments of transition.

A quiet mutiny features a series of small, unspecified creatures modelled in clay and left unfired, arranged in rows on shelves. Wright was thinking about the fantasy figurines collected by her sons and their friends, envisioning them as transitional objects, staging posts as the youths move from imaginative organisation to internalising the orderly systems they must negotiate and adjust to in society.

Elsewhere, a shopping trolley with a baby seat is not so much about consumerism as an indication of woman’s role as mother, carer and hunter-gatherer. The protagonist in Is everyone ok? has loved according to the code of middle management, but has now been pitched into unknown territory by retirement and the unravelling of the caring structure that has supported him. Another video, Song of Songs, poses its older couple as an operatic tableau: the tragic death scene. The words address love and jealousy, but for the woman it is clear that language itself, and its net of meanings, is disintegrating.

Though long based in England, Wright was born into a farming family in Co Longford. Her parents’ family backgrounds – Methodists and Quakers – in the context of rural Ireland may well have instilled an appreciation of identity and its complexities. She studied art at Sligo RTC and then at NCAD, followed by an MFA at Newcastle, with progressively greater emphasis on the conceptual underpinning of her work along the way.

As with the unfired clay that features in A quiet mutiny, Wright has been drawn to ordinary materials rather than, say, traditional high art ones. Plaster and tinfoil over bronze, for example; country and western lyrics over grand opera. The preference is not incidental; her abiding instinct is to undercut the grandiosity of established cultural forms and their underlying assumptions and presumptions.