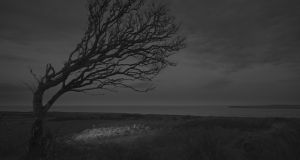 What is it?
Cillín, Lacken, Mayo is a night-time landscape photograph by Tommy Weir.

How was it done?
Until relatively recently – the latter part of the 20th century – in Ireland, it was common practice to bury unbaptised children in unconsecrated ground, in unofficial burial sites known as cillíní. They tended to be in remote, desolate locations: along boundaries of one kind or another, between townlands, on the coast where land meets sea or by lakes. The burials, Weir notes, were carried out by night. The father would take the infant’s body and bring it to the cillín, which might be some distance away. Instead of communal rites and whatever comfort they might bring, there was just this lonely journey.  Weir referred to archaeological websites and other resources to pinpoint the locations of cillíní. Preparatory visits and photographs were a prelude to eventual, solitary treks by night (“quite meditative and considered”), when conditions seemed amenable to obtaining the muted, dark-lit images that don’t merely document the sites but evoke the experience of the many fathers who undertook their sad missions.

Where can I see it?
It is included in Cillín, Weir’s exhibition at the RHA, Ely Place, Dublin (Until October 28th royalhibernianacademy.ie). After that the exhibition will be on view at The Dock, Carrick-on-Shannon, and then Uillinn, the West Cork Arts Centre, Skibbereen, offering access to people across a substantial part of the country.

Is it a typical work by the artist?
It is reasonably typical within a line of exploration looking at the representation of landscape in the light of its dense layers of human histories and associations, with substantial bodies of work made in Ireland, the United States and Finland (Weir completed an MFA in photography at Belfast School of Art). Though on the other hand he has been active in a wide range of creative fields, extending from fine art photography to design and publishing, curatorial projects, film and theatre, often and perhaps mostly working collaboratively and collectively. For Cillíní, he collaborated with poet Una Mannion and archaeologist Marion Dowd.

Weir was born in Dublin but is now based in the northwest. He graduated from Trinity College Dublin before beginning his creative career as a curator in the Douglas Hyde Gallery, going on to establish the gallery space at the late, lamented City Arts Centre in Dublin. In New York be became involved in broad areas of design, with Scholastic Publishing, Pentagram, Broadway productions, museums and the fashion industry. When he returned to Ireland he and his partner, film-maker Marian Quinn (32A) set up their company Janey Pictures. Production credits include several artists’ films, with Walker and Walker, Nick Miller and Grace Weir.

IRA disappearances during the Irish revolution
4