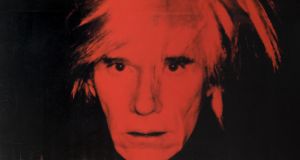 Andy Warhol: “His art was a really revolutionary statement . . . The New York art world before Warhol emerged was dominated by abstract expressionism.”

Upon entering London’s new Warhol exhibition – the Tate Modern’s first retrospective of ‘the Pope of Pop’ in 20 years – you will find much of his best work is within eyesight. Round Marilyn, Marilyn Diptych and Marilyn Monroe’s Lips line your field of vision. The ethereal Silver Clouds, comprised of dozens of pillowy foil balloons set in slow motion by passers-by, awaits in the background. But prise your eyes away from the shiny things and to your immediate right, and a far more significant piece is framed: the list of immigrants arriving into New York on June 11th, 1921. Squint, and the first entry can be read as “Varhola”, who we know to be Julia, wife of Andrej, and soon to be mother of the late, great Andy Warhol. It signifies the moment when the Warhol family began their pursuit of the American Dream, the subject matter that built Warhol’s revolutionary career right up until his last artwork: a screenprinted mural of The Last Supper, repeated 60 times to make a point about consumerism. While Warhol’s life experiences were rarely explicit in his work, his fascination with American culture comes from his time outside it.

Julia Varhola – which soon changed to Warhola – arrived into the country seven years after her husband Andrej, who fled Slovakia to avoid conscription in the first World War. With barely any English spoken between them, they set up in Pittsburgh, then a grimy industrial town known for its steel and manufacturing industries (when Julia later joined her son in New York, she reportedly said it was for the fresh air). The family lived in the Soho neighbourhood, “the Czech ghetto” as Warhol described it. In this suburb, Eastern European traditions seamlessly continued, especially under Julia. Every Sunday, the family walked a 10km round trip to attend the service of the Eastern Orthodox Catholic Church.

Warhol and his two brothers shared a bedroom “but you didn’t feel you were poor, because everybody else lived the same way”, recalls John Warhola, his older brother, in Blake Gopnik’s biography, Warhol: Life as Art. Warhol – an unreliable narrator at the best of times – said that Campbell’s soup was a luxury not known to the family; their soup was made from water, salt, pepper and ketchup.

In their neighbourhood, Slovaks were a low social class. Rent was higher, and they were held in contempt by their fellow migrants. “Warhol’s brother John remembered a ‘natural animosity’ and even actual violence between the Irish and ‘Slovak’ Catholics in their childhood neighbourhood,” writes Gopnik, partly because of “their willingness at the outset to work at any wages and under any conditions”. This work ethic, clearly seen in his father, a labourer, later helped Warhol build his creative empire. But it might be the only aspect of his childhood he embraced. Asked about his ethnic identity, he replied “I always feel American – 100 per cent”. Discussing his background before New York, Warhol wrote “my life wouldn’t fill a penny postcard”.

Yet the work he produced – often with themes of fame, celebrity and consumerism set against ideas of death, religion and identity – suggests a view of American society that could only come into focus as an outsider.

“This underspecified outsiderism might have been the most precious gift his forefathers handed down to him,” writes Gopnik. “It let him adopt the role of American Everyman: he could explain the nation’s culture to itself as only an outside observer could, while also reshaping it from deep inside.

“What made him matter was his ability to clue in to the obsessions that were shared across America, and then to come at them from the oblique angle of art.”

Some of the work in this retrospective, looking specifically at how Warhol’s life experiences shaped his work, holds a relatively clear message. Like the Statue of Liberty, whose effect is amplified by its tight crop. Or White Brillo Boxes stacked in a corner, whose conveyor belt production gave Warhol’s New York studio its name of the Factory.

But three works dig deeper in exploring his unique perspective. Round Marilyn is the most explicit example of celebrities treated as religious icons, with Warhol’s exposure to Byzantine religious art seen with its golden halo formation. There’s Skulls, “a memento mori, but also a portrait of everyone in the world,” says the exhibition’s curator Fiontán Moran (whose grandparents are from Sligo and Mayo, if the name sparks interest). A Woman’s Suicide – a screenprint repetition of the image of a woman falling from a skyscraper – is a particularly chilling piece. In a celebrity culture that continues to turn people into objects for public consumption (most recently, Caroline Flack and Meghan Markle), it holds even more resonance now, if we let it.

“What’s amazing about Warhol was that he wasn’t an artist who said ‘my work is about this’. He was open to people finding their own interpretations,” says Moran. “So at different moments in time, people are being able to find their own Warhol that makes sense of that time. It’s almost like he’s a therapist where he lets you project your inner desires or fears onto the work.”

His legacy also continues because he was prophetic in his topics. In 1975, at a time when marginalisation of the LGBT+ community was so rife that same-sex relationships were still illegal in New York, he unveiled Ladies and Gentlemen. It was one of his largest series of works, and features bright and bold portraits of drag queens and trans women of New York, including Marsha Johnson, a key figure in the Stonewall uprising six years earlier.

Loaned from a private collection, the exhibition, also curated by the Tate Modern’s Gregor Muir, displays a selection of the work publicly for the first time in 30 years. “But what’s really special about this series is not only does Warhol use painting in a far more experimental way, that in some way attempts to dramatise the theatricalisation of gender identity, but it also depicts the community in New York that would rarely have been depicted in the realm of fine art,” says Moran.

For such a rarely seen, timely, important set of works by one of the world’s most famous artists, their impact is, to these eyes, dampened by the pervasiveness of Warhol’s aesthetic. It’s a side effect when mass production is a core element of his work. In the adjacent shop, all manner of merch is on sale. There’s a trio of Happy Socks with Warholian motifs, and a large framed print with his quote “Art is what you can get away with” – so meta. The Tate’s high-rise restaurant has concocted a tasting menu inspired by his life and art, including Tuna Fish Disaster and a Coca Cola jelly. We can say with some certainty that it’s what he would have wanted.

His ubiquity obscures his ground-breaking status. “Sometimes you lose the fact that his art was a really revolutionary statement at the time,” says Moran. “The New York art world before Warhol emerged was dominated by abstract expressionism. To depict a celebrity on their own, and not trying to capture them doing gestural things, that decision was quite magical. Sometimes it’s easy to forget that how strange and unreal that was at the time.”

So even if Warhol described Pittsburgh as “the worst place I have ever been in my life”, his upbringing at least gave him the perspective to become, along with Picasso, the most influential artist in the 20th century. And not even the bright-eyed Julia Varhola could have imagined that as she stepped off the ship and on to American soil.