A terrifying snapshot of the way we live 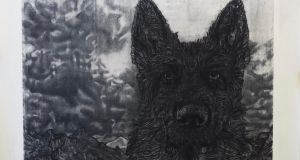 Generally the titles of Gary Coyle’s exhibitions and projects are reliable indicators of the mood they strike: South Side Gothic, Death in Dun Laoghaire, The Wild Wood. Now, Dreaming Different Dreams, his latest, might sound innocuous enough. Once you encounter the work, however (and though the exhibition is technically on view, a certain virus could delay that), you will be in little doubt that he does not mean different dreams in any way remotely related to an optimistic political slogan. After all, his is a resolutely Gothic imagination.

The show consists of a number of densely worked black-and-white charcoal drawings, long his signature medium, very effectively arranged with slight irregularity, partly against a highly textural, monochrome vinyl mural, based on a line drawing of a vertiginous mountain landscape (made with Aiden Greinelle). The mural’s colour is “a garish pinky purple” derived from wallpaper in the Wallace Collection. The location depicted is part of the Watzmann massif in the Bavarian Alps, an archetypal landscape of the German Romantic Sublime, as featured in paintings by no less than Casper David Friedrich. It also, presumably not incidentally, forms part of the view from Hitler’s Alpine lair, The Eagle’s Nest. Though rarely visited, this mountain retreat was an important part of the massive edifice of mythology surrounding the Fuehrer.

Several drawings are built around specific images; others are predominantly textual, with bold type emblazoned across dramatically lit skies. Among the images is The Black Dog, a hound depicted in as light cancelling a shade of black as charcoal can be and, like much else, ambiguous. Is it a single-headed Cerberus, guarding the gates of the underworld or, in a similar vein, a Hound of the Baskervilles, or symbolic of Churchill’s term for the depressions he suffered? Or none of these and just an amiable Labradoodle. Probably not, it does have an ominous look about it.

Equally, in Portrait of a Boy, the subject’s demeanour is curiously blank and hard to read. Is he simply one of those innocently in line to inherit the shambles his precursors have managed to create, or something more problematic, someone whose imagination is prone to be poisoned and weaponised. He does have the slightly ominous appearance of one of those figures lurking in the wood who featured in Coyle’s previous work.

Coyle cites a remark by Philip Guston from 1967. The painter wonders how he can make tasteful decisions about colour in the studio while he’s fuming about the state of the world he lives in. Guston’s solution, famously, was to forsake abstraction and make broad, cartoon-like political allegories about his feelings on what was happening around him. Coyle mentions Black Mirror, a drawing in which an arm extends a selfie stick, as a specific reference to a Guston composition. The selfie is a symbol of the narcissistic self-absorption of our time.

Several text drawings – No, Guilty, FOMO – feature single words or acronyms against dramatic skies, delivered with the in the kind of epic, metallic typefaces characteristic of grandiose death metal album sleeves, say, or Hollywood blockbusters of earlier times. Individually each might seem quirky, perhaps amusing: Guilty alludes to a conditioned state of ubiquitous guilt; FOMO a form of anxiety thriving in the age of social media. Collectively, however, they do project a distinctly dark tone. Dreaming Different Dreams, for example, refers to North Korean leader Kim Jong Un’s brutal purge and execution of his uncle, Jang Song Thaek in 2013. Among the litany of his relative’s “crimes”, Coyle noticed, was “dreaming different dreams”.

Not an isolated dystopian phenomenon, he feels, but a reflection of a state of affairs, ordained by surveillance capitalism, whereby everyone is persuaded, through the workings of digital technology, to dream the dreams the market deems are suitably theirs. Taken overall, Dreaming Different Dreams is a terrifying snapshot of the way we live now. Whereas for Friedrich the mountains presented an overwhelming experience of divinity, greatly transcending the merely human, Coyle seems to sketch out another version of the sublime, one that is terrible and vast but essentially created by humans themselves, a variation on what has become known as the technological sublime.

His case seems to go like this: between malign, deluded leaders, and witless self-absorption and passivity, we’ve managed to wreck the planet and surrender any real autonomy. Looking back over the totality of Coyle’s work there is perhaps something else: he’s consistently been fascinated by what might be termed the flaw in humanity, a dark, destructive impulse that will get us in the end.