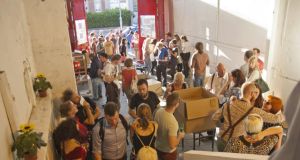 An event at Mart in Rathmines 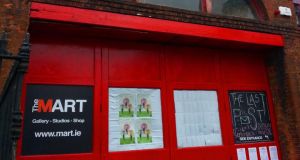 The exterior of Mart on Rathmines Road Lower

If you’ve walked through Rathmines recently, there’s a good chance you’ll have noticed the word “Mart” popping up all along the street. Coming from the canal, you see it first on your left, on the front of one of Rathmines Road Lower’s old townhouses. Then it’s on your right, above a casino. Finally, on your left again, outside the old Rathmines Fire Station, which has been converted into the central hub of Ciara Scanlan and Matthew Nevin’s rapidly growing creative enclave.

Scanlan and Nevin founded Mart in 2006 as a multidisciplinary arts group, with the intention of putting on pop-up shows of performance art and experimental video in empty retail spaces in Galway, a city that Scanlan says at that time was “just loads of empty space”.

Exhibitions in Galway were soon followed by trips to London, continental Europe and the US to install pieces, teach workshops and perform. After a couple of years of travel, the pair found themselves back in Dublin and eager to find a place they could settle in to and work. After six months of searching, they found the derelict fire station, pestered the City Council to give them the keys and undertook the difficult task of bringing the place back to life.

Over 16 months, the pair transformed the space from what was little more than a 180-year-old ruin, which had been abandoned for the previous 25 years, into two well-appointed galleries, eight studios and an office. Without a budget for builders, they had no choice but to do the work themselves, so they figured out the details as they went along and enlisted volunteers whenever they could. A FundIt campaign raised enough money to get electricity, and more fundraising bought a fire alarm system. Each slow step brought them a little closer to opening those big red doors.

“It’s still a bit of a shed, but it’s a safe one,” says Scanlan. “There’s such history in the building. There’s still horse-hair coming out of the plaster, from 100 years ago. We’re not going to rip that down and make it into something else.”

The gallery is unusual in that the doors of the front room open directly on to a very busy thoroughfare. There is literally no barrier between the art and the person on the street.

“Once you open those doors, more people than the average art-viewing audience will come in,” says Scanlan. “Sometimes you get people who come in and they don’t get it. They’re angry, they hate the art and they storm out. But at least they’ve come in and they’ve looked.”

The fire station has also housed theatre events and a music festival. Last December Nevin and Scanlan expanded, opening seven more studios above the nearby casino. They followed that up in June with 13 studios and a cafe in an old townhouse.

This kind of rapid growth is rare in the art world, but Nevin says it has been necessary in order to generate the income required to make the project sustainable, paying themselves, their rents and, perhaps most unusually of all, the artists. “We had to grow at this speed to stay open,” he says. “We make sure that every building is sustaining itself, so if one collapses, it doesn’t bring down the whole family.”

That whole family is now spread out along Rathmines Road Lower, once a focal point for students and others landed up from outside the Pale.

These days it’s a relatively self-contained area, home to all sorts of people. Scanlan enjoys what she calls “the small town-ness” of Rathmines. She finds the locals very open and supportive of what they are trying to do.

“Moda next door are really supportive to us,” she says. “Abner Browns barbershop with Dave there, he’s really supportive. Clegg’s. The Third Policeman. All the local business people know each other and check out what everyone is doing. There is a really nice vibe.”

“There is a real community here,” says Nevin. “It’s like a small town in the city centre.”

Celebrating a society of outcasts: the homeless prostitutes known as Curragh wrens
8