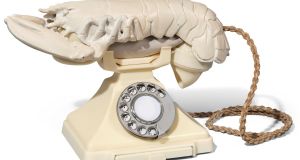 The sale of works given to Dalí’s patron and friend Edward James, is expected to raise up to €2.8 million. Photograph: Christie’s Images. 2016 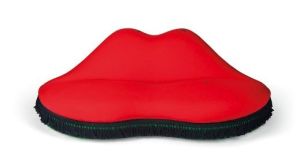 Salvador Dalí’s lobster telephone and Mae West lips sofa – two of the most famous surrealist objects ever created – are among hundreds of artworks to be sold at auction to help fund a permanent display of their extraordinary history.

They are among 200 works from the Edward James foundation that will be auctioned by Christie’s in December, in a sale expected to raise up to €2.8 million. The sofa is estimated at up to about €443,000, and the lobster telephone up to €277,000.

Both artworks were made in the mid-1930s, when Dalí was broke and Edward James, his millionaire friend, poet and highly eccentric patron of the arts, offered him a monthly salary for a year in return for everything he made.

There were several lobsters and five of the spectacular, but hideously uncomfortable, sofas – Dalí said he modelled them on some particularly painful rocks on the beach at his Spanish home in Cadaqués – and originally James kept the lot in his unconventionally decorated London and Sussex homes.

Dalí was particularly fond of lobsters. “I do not understand why, when I ask for a grilled lobster in a restaurant, I am never served a cooked telephone,” he explained. “And why, on the other hand, telephones, which are habitually so frightfully warm and disagreeably sticky to the touch, are not also put in silver buckets with crushed ice around them.”

Alex Barron, chief executive of West Dean college, the centre for arts and conservation that James endowed, said: “We still have two lobster telephones, so we have to ask ourselves, we obviously need a lobster telephone, but do we really need two? We also have three Mae West sofas, and that’s just greedy, isn’t it?

“We’ve asked ourselves of every object in the sale, ‘What do we need to keep to tell the story and for teaching purposes, and what is really just sitting in storage and seen by nobody?’ We’re keeping two of the sofas, so we’re certainly not stripping the place of its contents.”

A proposal some years ago by the trustees to sell far more of the collection was opposed by many of the staff and students.

The mansion set in West Sussex grounds was bequeathed by James, along with its contents, to become a teaching centre for arts, crafts and conservation, including woodwork and metalwork, musical instrument making and tapestry. Although the gardens are open because the main building is heavily used for residential courses, it is usually only open to the public one weekend a year. The sale will help create a permanent public exhibition space for part of the collection for the first time.

Neither telephone nor sofa would have looked out of place in any of James’s homes. He inherited a fortune, and the West Sussex estate from his American father, William Dodge James – though the patron liked to think his true father might have been the Prince of Wales – who made his money in mining and US railroads.

James lived mainly in nearby Monkton House, which came to him as a modest, plain home designed by Sir Edwin Lutyens as a refreshing break from the opulence of the main building. James painted the walls a searing purple, added two-storey palm-tree trunks and murals of washing hung out to dry, and heavily padded the interior walls.

He slept in a bed modelled on Nelson’s hearse, and when he married Tilly Losch, an actor and dancer, he commissioned a green carpet woven with her footprints. The marriage did not last, with James accusing his wife of adultery and Losch suspecting her husband was gay. When they separated he had the carpet replaced with one woven with his Irish wolfhound’s paw prints.

The sale includes a large group of paintings by the Russian-born Pavel Tchelitchew, an artist James supported for years. Many more conventional objects inherited from his father – including family portraits bought with the house and a pair of blue vases on gilt tripods he believed originally came from Versailles – will also be on display.

When Amelia Walker, head of the sale for Christie’s, searched out the references for the vases in the voluminous archives at West Dean, she found that one was cracked when Dalí’s father received it, so he simply commissioned a replica from Royal Doulton, a company that produced collectables.

“He was using his money to create the quintessential Edwardian country house where he could entertain society,” she said. “But he had very good taste and a very good eye, and he bought excellently.”