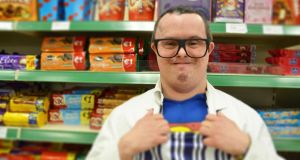 Silent Moves: the title and action of the piece recall the slapstick comedy of Buster Keaton

The umbrella project Ignite was designed by the Arts Council, Arts and Disability Ireland and local authorities in Cork, Galway and Mayo to provide opportunities for artists and performers with disabilities, from Ireland and abroad, to make new work and to present it publicly in 2014 and 2015. Each project was funded with €60,000 and one of the completed presentations was selected to tour the country in 2015.

The short film Silent Moves, devised by visual artist Aideen Barry, assisted by dance artist and choreographer Emma O’Kane and by members of the Ridgepool Training Centre and Scannán Technologies in Ballina, Co Mayo, was the project chosen for that final accolade. Barry, only too aware of the disabling and frustrating effects of an anxiety disorder, worked with the group to explore their daily lives, joys and frustrations through an age-old love story, with all the proven ingredients: shy heroism, beauty and a fair measure of villainy. This time. however, that narrative is confronted by new, and very real, challenges.

What if the lovers have intellectual disabilities? Ireland was intoxicated with its own generosity of spirit and open-mindedness in voting to allow same-sex marriages in 2015, yet remained loath to encourage adult relationships between people with intellectual disabilities. While other taboos on marriage have been joyfully thrust aside, it remains an offence under Irish law for an adult with an intellectual disability to have sex outside of marriage, and such marriages are not facilitated. Silent Moves provides a witty and thoughtful reminder that some inequities remain as insurmountable as ever.

The participants in Silent Moves suffer all the frustrations and injustices of this culture, along with other, more banal, restrictions. Communication problems, mobility, access to buildings and careless parking that blocks access to wheelchair ramps are among the obvious ones, all shown here, again and again, to hilarious effect. In discussion with Barry and O’Kane, the participants chose to approach these problems through humour and to express them visually, without spoken language. The title and the action recall the slapstick comedies of Buster Keaton, as do the stop-motion techniques that the group learned along the way.

A key connecting element in the narrative is the town of Ballina, reminding us of the history of a typical Irish community that has coped with disabilities in the past in various ways, although, surely, never before in such an empowering manner.

Community arts has struggled for a place in Irish art practice since the establishment of Grapevine Arts Centre in the 1970s. It has been constantly relegated to a minor supporting role in critical commentary and in public collections, and written off as social work rather than art, or of dubious quality, since it rarely shores up traditions of “high art”. From start to finish, Silent Moves was a collaborative project involving well-known artists, two highly talented community groups and local support. The fact that this, rather than a more traditional single-authored work, was chosen as the people’s choice in this series, from a shortlist of options, suggests that now, after years of patient struggle, community projects are finally gaining their place in the canon of Irish creative achievement.