Hélio Oiticica: a Brazilian iconoclast who burst out of art’s frame

A retrospective of the late artist illuminates his remarkable artistic evolution 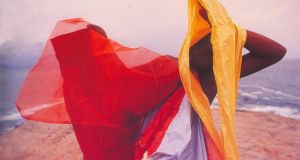 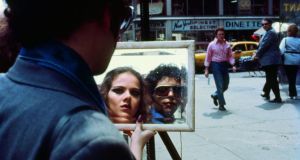 A still from the film Agrippina is Rome-Manhattan (New York, 1972)

At the heart of the Irish Museum of Modern Art’s Summer Rising festival, which culminates on Saturday, is the work of Brazilian artist Hélio Oiticica, who is now regarded as having had a profound influence on much contemporary art.

Oiticica was in his early 40s when he died in 1980, having suffered a stroke. He was an exceptionally dynamic individual, boundlessly inventive and creative. Imma’s retrospective, Propositions, gains from being co-curated by his nephew, César Oiticica Filho. Not that an artist’s nephew will automatically be an authoritative guide, but it’s not just a question of the family connection: for 10 years, Oiticica Filho worked on a documentary film about his uncle.

The result, titled simply Hélio Oiticica, has garnered praise and picked up several awards. Oiticica Filho says he researched the project exhaustively, working through masses of archival material and allowing Oiticica to explain himself in his own recorded words, rather than imposing any outside, “expert” commentary.

It’s not at all random or miscellaneous, however. A remarkably coherent narrative emerges from a pattern of brisk, rhythmic montage, probably because there was a clear trajectory to the artist’s life and work.

Oiticica comes across as someone who was driven to transcend boundaries. While his art is conspicuously social and communal, occasionally to an extreme degree, at the same time he lived in an inner imaginative world of his own creation. He was at the heart of the Tropicálismo cultural movement that emerged from a liberal period in Brazil’s history, a period that was abruptly cut short by a military coup in 1964.

The movement’s title came from one of Oiticica’s works, Tropicália. More generally associated with musicians, including Caetano Veloso and Gilberto Gil, the movement dispensed with divisions between popular and avant-garde culture, high art and low. Tropicálismo was opposed to the military dictatorship that followed the coup, and the utopian, countercultural nature of Oiticica’s work must be seen as being politically charged in that context.

He wants to break free

Oiticica Filho, working with Imma’s Rachael Thomas, frames the exhibition as a series of “propositions” put by the artist. Each represents a bid to break free from a set of restrictions, and there is a forward momentum.

Chronologically, we begin with his abstract paintings, very much in the mould of mainstream European abstraction, and quite beautiful. It’s noticeable that Oiticico quickly moves from a palette of primary colours to warmer, more tropical hues.

Oiticica Filho points out that his uncle’s artistic evolution began some time before even his student work, in a way that directly prefigures what was to come much later on: “As a child he was making work without ever saying that it was art.”

He made a labyrinth for ants, for example, a relatively minor project but one that anticipated his later creation of colour mazes in his Nuclei series. “He started making plays. He did his own adaptation of Medea and cast family members to perform it. He did the costumes, the design, everything.”

Then he moved on to writing plays from scratch. “He set about creating an imaginary city,” says Oiticica Filho. “In the city there were theatres, and his plays were being performed in those theatres. There were posters, advertisements. It was as though he imagined this alternative life, an alternative world. To me it seems that it was a very web-like way of thinking.”

He became dissatisfied with dealing with form and colour within the constraints of the two-dimensional rectangle and embarked on an iconoclastic path.

“If you look at what he is doing, you can see that he is setting about the deconstruction of the art object,” Oiticica Filho argues. “He’s breaking out of the frame of the painting.”

At first this happens within the context of geometric abstraction, in a series of elegant monochrome compositions. He moved away from colour into pure white, then emphatically back to it, embracing simmering yellows, oranges and reds.

“The experience of colour, the exclusive element of painting, became for me the very axis of what I do, the way I begin a work,” he wrote. “Only now does the complexity of the relationship between colour and structure truly begin.”

Having moved away from rectangular compositions with all-white, two-sided pieces, he found a way to allow the spectator to engage with colour in a different way by creating suspended spatial reliefs. You can move around these suspended, sculptural, coloured forms.

His next proposition was to make small sculptural objects, Bólides (Fireballs), and then his much larger Nuclei, hanging coloured panels in maze-like arrangements. Then came his Penetrables. These are compact, architectonic constructions of door-sized, sliding coloured panels. The idea is that the spectator can physically move through the work and rearrange the panels.

“That took him one stage further, towards his environmental pieces,” says Oiticica Filho. “He’s looking at how we experience art, and drawing us more and more into it. From something you look at, it comes to involve more of our senses: touch, scent, sound.”

There are, however, limitations on how far we can follow Oiticica’s intentions when we are dealing with what are now fragile objects.

That doesn’t arise with the Parangolés, which are made to order and utterly dependent on our participation. They derive from Oiticica’s involvement with Mangueira Hill, a favela in Rio de Janeiro. Recalling his childhood theatrical productions, they were devised as costumes for dancers in the famous Mangueira samba school. They are far from conventional, however. Many are elaborate and sculptural. The dancers become not so much art objects as artists, creating works as they move.

For Oiticica Filho, that’s the crux of what his uncle tried to do. “He really wanted to do new things, to create new names, new concepts, new objects.” He moved from a position within mainstream modernism, making abstract paintings, “to the point where the participant becomes the creator of the work, not the artist. He went right to the edge, and this exhibition goes to the edge of his work.”

Hélio Oiticica: Propositions is at Imma until October 5. Summer Rising is on today and tomorrow at Imma. The final event is a summer party featuring Gang Colours, Somerville, Donal Dineen, David Kitt and more. imma.ie

Hope and history rhyme with five-star luxury at upcoming auction

Keanu Reeves: ‘Grief and loss are things that don’t ever go away’
9 'It was like an Ayckbourn farce'
10