Carsten Höller: ‘ Nobody I’ve met is aware of what sort of person they are’

The in-demand artist, who’s showing at this year’s EVA International, offers ‘unique inner experiences that can be used for the exploration of the self’ 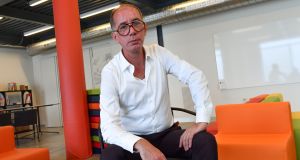 Triptych: Casten Höller’s installation One, Some, Many appears at three venues during this year’s EVA International 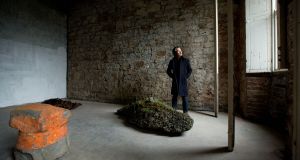 Admirable success: Michael Joo with This Beautiful Stripped Wreckage (Which We Interrogate), at EVA

Over the past quarter-century Carsten Höller has become one of the world’s most in-demand contemporary artists. Here he is probably most closely associated with Test Site, his 2006 installation at Tate Modern. Reprising previous manifestations of the concept, he made five metallic slides snake their way through its huge Turbine Hall. Visitors were invited to experience the “voluptuous panic” of a loss of control as they corkscrewed their way through the void and came to earth. It was, Höller said, an exploratory sculpture, offering “the possibility of unique inner experiences that can be used for the exploration of the self”.

The Tate slides – which he has echoed in the tunnel slide he has just added to Anish Kapoor’s Orbit Tower, the huge piece of public art at Queen Elizabeth Olympic Park, in London – were a big hit.

At this year’s EVA International, in Limerick, Höller’s installation One, Some, Many appears in three venues. At each you encounter a microphone, set up as though someone is about to make a speech. The microphone is listening and, on hearing key words, responds.

Höller, boffinish in appearance, has a personable, slightly mischievous manner. He is based in Stockholm, Cologne and Biriwa, a fishing town in Ghana – an unusual arrangement. Almost by chance, in 1999, he and a friend, the video artist Marcel Odenbach, bought some land on the Ghanaian coast, and over 10 years designed and built a spacious concrete home facing the Atlantic. He gets there “every other month”, he says, although he generally lives in Stockholm, with his girlfriend.

In Ghana, he says, he doesn’t make art. “I love being alone there for a week. It’s funny: I always bring lots of books, but I end up hardly reading at all.” He is involved in a bird-ringing programme there.

“So I am up early, to check the nets, ring the birds, write notes, take photographs. By the time that is all done it’s time for lunch, then a siesta, then a walk.”

That brings him into the evening, supper and sleep.

It’s striking that several animal species have featured in his work but not, noticeably, birds. “I have always had a passion for birds,” he says; it dates back to his childhood. He bred songbirds. “Some birds I also like to eat. I deliberately leave them out of my work, because it would be too personal.” In fact, his passion for birds influenced the direction of his studies. Coming up to university age, “I was a bird freak.” The obvious thing would have been to become an ornithologist. But that too felt wrong: he wanted to preserve his passion.

Höller was born in Brussels in 1961, to German parents. Although he had an interest in art, and his mother was positive about it, his father had an opposing view: “His argument was that you can always become an artist but that you can’t always become a scientist.” Höller opted for agricultural science at Kiel; he found that his fellow students were, naturally enough, farmers. He did not want to be a farmer. But the issue of problems with crops featured large, and he gravitated towards phytopathology, which studies diseases in plants. He studied the complex relationships between insects and plants. Insects? “Yes,” he says, smiling. “Because they are a little bit like birds. They fly; they make sounds.” His PhD explored the role of smell in the interactions between aphids and their enemies.

Initially he thought he would continue to work as a scientist and make art. When he turned to art, “I had a clear idea: use my scientific background, use that world view to do things you would never be allowed to do as a scientist.” To his surprise, many people in the art world were intrigued by his scientific background, and art quickly took over.

His installations could loosely be described as behavioural experiments, but, because they are art, he has a great deal more freedom than he would as a scientist. “The thing is, compared to art, science is a lot of work. Even a minor research project involves many people, many skills, endless preparation. You know? You measure something not once but 100 times. It’s enjoyable, fascinating, but frustrating.”

He likes using art to address areas not quite amenable to conventional science. “I’m interested in questions we have no answers for. For example, the question of consciousness. When Francis Crick was involved in cracking the structure of DNA, he reckoned consciousness could be solved in 20 or 30 years. We’re still in the dark. We don’t seem to have been going about it in the right way.

“For one thing, I don’t think consciousness and language are completely compatible. There’s an area of them not fitting together. Nobody I’ve met is aware of what sort of person they are. That includes you and me. In evolutionary terms, I suspect, this lack of self-awareness must be a function of mental health, of survivability.”

Such ideas are more easily explored through art, he suggests.

Coming to art with a scientific mindset has been beneficial, he says. “I don’t believe that art schools make sense, really. I think they do a lot of harm. A student needs access to information, to the building, but beyond that . . .”

Höller is not looking for a particular reaction or interpretation. “Once people take it over, it’s up to them.” It’s unpredictable. He recalls trying to work out health-and- safety concerns in advance of his show at the Hayward Gallery, at the Southbank Centre, in London. “The funny thing was, what we considered potentially risky turned out not to be so at all. But what we thought was very safe, well, people found odd ways to interact with it, ways we’d never considered.”

Once people were set free, unexpected ideas emerged. He’s even okay with the destruction of a work. “The exhibition becomes a public space. It’s like an amusement park.”

He likes the amusement-park analogy. A week before the opening of EVA, he had been in Milan for the opening of his blockbuster exhibition Doubt. He was very impressed by the venue, Navate, part of the Pirelli HangarBicocca. “It’s the largest space I’ve seen. It dwarfs the Turbine Hall.”

The exhibition includes many of his trademark pieces, including his Upside-Down Goggles, Two Flying Machines and Double Carousel, all of which, as the titles suggest, offer quite radical, even challenging experiences for visitors. “It looks like an amusement park,” he says. “But without the amusements. You have to work for your fun. You experience yourself behaving in a different way.” Which is a pretty accurate description of what his work does.

Still (the) Barbarians: Reconstituting the heart and history of a building

Many social and political units, including political parties, nations and empires, exploit the nonspecific menace of the other. She has put together a dense, immensely involving series of works that reflect a breadth of perspectives and experiences of being that other.

At least one brilliant work has emerged from the process rather than being brought to it: Michael Joo’s This Beautiful Stripped Wreckage (Which We Interrogate).

It is in, about and made up of the Sailors’ Home, a resonant location in Limerick that has been used as a venue for several exhibitions in the recent past.

Joo, who is American with Korean parents, visited Limerick last September to look at several potential sites. “Koyo and Woodrow” – Woodrow Kernohan, EVA’s director – “put the home on my radar, and I couldn’t get it off my radar.”

The mid-19th-century building was in a state of decline until came into the care of the Shannon Foynes Port Company. Joo began to think of the house as a body, fragmented and dispersed. He returned window frames that had been removed for preservation treatment, but they stand proud of the windows: “The ribs of the building,” he suggests.

He gathered various materials relevant to its past: a substantial mass of plaster recovered from the garden, once part of the interior; a twisting length of hawser from the port “colonised by moss”; chains; shackles; and other heavy metal gear.

His idea of symbolically reconstituting the heart and history of the building works incredibly well. The only outside interpolation is an image of an ascetic Buddha from the British Museum, which you find resting on its side when you climb the stairs.

Joo set out to make the most tactful of interventions into the Sailors’ Home while elucidating its history and associations, and he has succeeded admirably.

EVA International: Still (the) Barbarians, curated by Koyo Kouoh, with works and projects by more than 50 Irish and international artists, runs until July 17; eva.ie