An exhibition of art in the Louvre has provoked fury in Germany for portraying the country as a dark and dangerous neighbour – has it ignored key movements deliberately, or is it all a matter of taste? 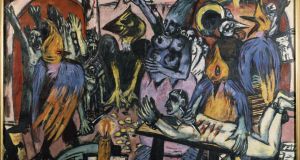 Above, a detail from Max Beckmann’s The Hell of Birds. Photograph courtesy of the Louvre 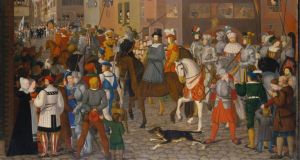 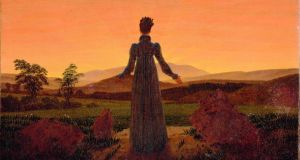 A detail from Caspar David Friedrich’s Friedrich’s Woman in the Morning Sun. Photograph courtesy of the Louvre

The Louvre’s spring exhibition, De l’Allemagne; German Thought and Painting 1800-1939 has generated so many ruffled feathers and bruised feelings that it is worth saying at the outset what is good about it.

A German newspaper lamented that the contemporary German artist Anselm Kiefer’s monumental engraving on wood and collage on canvas “sets the tone for the rest of the exhibition” by reminding visitors of “Germany’s bloody past”. Yet Kiefer’s work is a powerful evocation of the tragic pairing of countries that fought one another four times in two centuries, taking many tens of millions of people to their graves.

Kiefer’s room, through which one must pass to enter and exit the exhibition, is black, white and grey. The Rhine, the border between France and Germany, surrounds one, along with the Atlantic Wall and the Maginot Line, vestiges of two World Wars. Black tree trunks rise from the banks of the Rhine, like the bars of a prison that traps, submerges and encloses the visitor in an inescapable past. A geometric prism floats across the scene, annotated with the word “Melancholia”.

Kiefer was born in 1945 and has spent his life asking how the horror happened. He adds Satan to the Holy Trinity, thus transforming it into a quartet. Among the names of great German thinkers painted on the walls, Kiefer includes Paul Celan, the Romanian-born, German-speaking Jewish poet whose parents perished in the Holocaust, and who drowned himself in the Seine in 1970. “There are still songs to sing, above and beyond the history of men,” are the hopeful words of Kiefer’s homage to Celan.

The mood then shifts to the past, with Johann Heinrich Wilhelm Tischbein’s iconic portrait of Goethe in the Roman Countryside (1787). The German Centre for the History of Art in Paris, one of the chief protagonists in the controversy over the exhibition, had wanted the great German poet, writer and thinker to be its focus. Goethe’s watercolour studies of the spectrum of light and his paintings of plants are a delightful surprise, shown alongside strikingly similar works by Paul Klee, done more than a century later.

Max Beckmann’s The Hell of Birds , painted in 1938, after the painter fled Nazi Germany for Amsterdam, closes the exhibition. A row of garish figures on the left raise their hands in Nazi salutes. A dark German eagle presides over the centre of the canvas, beneath the Nazi salute of a bird-like priestess with four breasts. A naked man lies prostrate on a table, his hands and feet bound, while a creature scores his back with a knife. Le Monde called Beckmann’s painting “perhaps the only canvas of the century that could be hung next to Guernica and hold its own”.

It is easy to see why the exhibition’s German critics interpreted The Hell of Birds as an allegory for Nazi dictatorship; it is more difficult to understand why the Louvre’s curators excused it as “a militant pacifist work, a work of resistance”.

The exhibition of more than 200 works was meant to commemorate 50 years of Franco-German friendship since the Treaty of the Élysée. It will continue, under the patronage of President Francois Hollande and Chancellor Angela Merkel, until June 24th.

The world’s most-visited museum strived for political correctness, all but ignoring the official, Nazi-approved art of the 1930s and dubiously portraying universalist humanism as the German artistic response to the horrors of the first World War. Among August Sander’s striking 1930s photographs at the end of the show are two portraits, one a man, one a woman, entitled “persecuted”. Were they Jewish? The Louvre doesn’t tell us.


The Louvre was “surprised and profoundly hurt . . . shocked by the openly Francophobe statements” in Die Zeit ’s critique of the exhibition, wrote Henri Loyrette, the director of the Louvre,

in a four-page letter to the Hamburg daily. Accusations that the museum intended to convey a “sinister” vision of Germany were “totally unfounded”, Loyrette continued. “We had no other ambition than to enable the French public to discover the richness, diversity and inventiveness of German painting from 1800 to 1939,” he protested.

Yet the official notes, published by the museum, seem to confirm its German critics’ chief grievance. The notion that nationalism was the driving force in German art permeates the exhibition. “While the Napoleonic occupation helped advance the cause of unity in this vein, providing the political underpinnings for the earliest stirring of the Romantic movement, the rise of Nazism, at the end of the period’s chronological span, revealed the tragic dimension of this concept,” the curators write.

The wings of the angel in Julius Schnorr von Carolsfeld’s Annunciation (1820) are gold, red and black, the colours of Germanic peoples since the Middle Ages. The museum calls Franz Pforr’s Rudolph von Habsburg Enters Bâle (1808-1810) “a nationalist manifesto”. Painted under Napoleonic occupation, Pforr’s masterpiece shows the foundation of the Habsburg dynasty in 1273, but in 16th-century costume. Nostalgia for the 962-1806 Holy Roman Empire, when German-speaking peoples lived under unified rule, is a recurring theme in early 19th-century art.

The show includes six paintings of the Catholic cathedral of Cologne. After a lapse of centuries, Protestant Prussians completed the cathedral in 1880. It was then the tallest building in the world, and a symbol of a powerful and united Germany.

Natascha Marest, a German guide employed by several French museums, finds the Louvre’s exhibition “superb”. Yet she understands why a German who regards it superficially might be offended. “In my youth, in the 1970s and 1980s, all we watched were films about the Holocaust,” she explains. “We never read Goethe. The myths of the Nibelungen were not taught. We were ashamed of our cultural heritage. When a German sees the Cologne cathedral and [Leo von Klenze’s 1836 painting of] Valhalla in an exhibition, it may shock him; he may say, ‘This is a nationalist interpretation of German art’.”

The exhibition includes 20 paintings by Caspar David Friedrich, the master of the 19th-century Romantic landscape. Friedrich’s Woman in the Morning Sun (1818) shows an elegantly clad woman facing the sunrise and is the signature painting of the exhibition. The spiritual, mystical Friedrich rejected Goethe’s exhortations to paint according to scientific theories. “Close your physical eye to see first with the eye of your mind,” Friedrich said.

Yet even Friedrich’s syrupy landscapes are accused of nationalism. In Tree With Crows (1822), gnarled branches, freighted with birds of ill portent, are framed against a pastel sky. The tree grows from an ancient Druid tumulus, evoking the nation’s origins and its capacity to survive.

During the wars against Napoleonic France, the Louvre notes, “the land takes on patriotic connotations; the feeling of nature an ideological dimension”. Friedrich exalted the landscape – considered an inferior art form by the French – and made it quintessentially German.

The Louvre’s logic
The title of the exhibition is taken from Germaine de Staël’s De l’Allemagne (1813), which shaped French attitudes throughout the 19th century. One has only to read her chapter on fine art to understand the Louvre’s approach: “Germans in general conceive of art better than they put it into practice,” she began. Germany’s best painters – Dürer , Cranach and Holbein – lived before the Reformation, de Staël wrote. Germany produced fine writers and musicians, she added, but not artists. The stereotype persists today.

Much of what is best in German art – the Brücke, Blaue Reiter and Bauhaus movements, for example – was left out of the exhibition on the grounds that these were international movements. Instead, many of the paintings on show are second-rate, a confirmation of the French view that Germans can’t paint. And many are Austrian or Swiss, not German. Anselm Feuerbach’s Lucretia Borgia (1864) is mannish and ugly. Arnold Böcklin’s Frolicking Mermaids (1886) is kitsch.

Whatever the intention of the Louvre’s curators, and despite the controversy they’ve ignited – or perhaps because of it – the exhibition is a success, drawing 3,400 visitors daily; 81 per cent more than the museum expected. “Our bet was that the French, like Madame de Staël in her time, harbour curiosity and fascination for Germany,” says Henri Loyrette. For Germany, he concludes, is France’s neighbour, “so close and yet so far away”.

The German view: criticism belies exhibition’s success
Critical reaction to the Louvre exhibition in Germany has ranged from polite applause to furious scorn. The Frankfurter Allgemeine and Die Zeit attacked the show for, in their eyes, following the controversial Sonderweg (“special path”) narrative of German history – namely, that German history took a path separate to its neighbours that triggered an inevitable slide towards Hitler.

This impression, they suggested, is underlined by the exclusion of respected German art movements dubbed “degenerate” by the Nazis – such as the Secession, Bauhaus or Brücke. Both newspapers relate complaints from the German Centre for the History of Art in Paris. Although ostensibly a co-curator, it claims to have been excluded from the show’s curation process.

“These restrictions are unusual in international academic circles, to put it mildly,” says Andreas Beyer, the centre’s director, in Die Zeit. When finally allowed into the Louvre the Germans told the FAZ they were “amazed and appalled” by a “visual history of an abysmal land . . . headed more or less straight for National Socialism”.

“The accusation is that the Louvre took the material delivered by the German Centre and formed their own history of Germany that confirms all cliches of the romantic-strange, dangerous and dark neighbour,” writes FAZ critic Niklas Maak.

He adds: “Whoever doesn’t read the catalogue essays and only follows the show’s signs gets the impression that the Germans, after a short period of fascination with the antique era, retreated to their forests and . . . went crazy around 1900 before emerging during National Socialism.”

Die Zeit agrees, suggesting visitors should concentrate on the art and ignore the Louvre’s attempt to impose an Apollonian- Dionysian dichotomy of order and chaos on German art. “To call the exhibition’s concept an over-simplification would be a euphemism,” it notes drily. Germany’s best-selling quality daily, the Süddeutsche Zeitung, disagreed, praising the show for “not drawing a direct line from romanticism to National Socialism”.

It points out that footage of Leni Riefenstahl’s Olympia is juxtaposed with Billy Wilder’s little-seen film Menschen am Sonntag, showing that 1930s German life was not one endless show of Aryan muscle. On Deutschlandradio Kultur, Prof Bénédicte Savoy, a French-born art historian based in Berlin, suggested the allergic reaction in some quarters suggested that “Germans don’t like being liked. In Paris, the exhibition is a huge success,” she said.

“Everyone’s saying that their eyes have been opened and have got to know the more gentle Germans.”