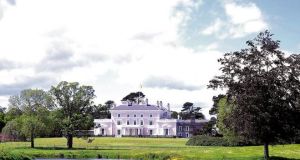 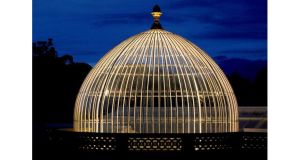 The domed roof of the restored conservatory. PHOTOGRAPH: VIBSE DUNLEATH

HERITAGE: Despite its grandeur and rich history, the Mulhollands of Ballywalter say theirs is a comfortable family home, not a museum

THE NEAT LITTLE Co Down village of Ballywalter sits on the coastal shore of the Ards Peninsula, looking across the North Channel towards Scotland. On the south side of the village, behind a weathered stone wall, is to be found one of the great houses of Ireland. Turning in through the tall gateposts, one enters another world, a peaceful haven of towering trees, rolling pasturelands and formal lawns, presided over by the glorious Victorian Italianate palazzo that is Ballywalter Park.

“It has belonged to the Mulholland family since 1846, when my great, great, great uncle Andrew Mulholland bought it for the then princely sum of £23,000. It comprised a demesne of about 250 acres around a Georgian house called Springvale,” explains Brian Mulholland, the fifth lord Dunleath and current occupant.

Andrew Mulholland and his brothers made their fortune in the linen industry and were the owners of the York Street Flax Spinning Company, then the largest linen mills in the world.

“Andrew became lord mayor of Belfast and found Springvale a little modest for his ambitions,” continues Mulholland. “He commissioned the distinguished Belfast architect Charles Lanyon to build the magnificent house you see today.” In its heyday, Ballywalter Park was a gathering place for the privileged upper classes, hosting splendid balls, shooting parties and country house weekends. Among its guests were the then duke and duchess of York, prior to their coronation as king George VI and queen Elizabeth, who came in July 1924 to enjoy the summer weather and games of tennis on the lawns.

Brian Mulholland inherited the title in 1994, after the death of his cousin, Henry. He moved in in 1997 and set about continuing the daunting restoration work, which was begun by Henry and his wife, Dorinda – “the unsexy stuff”, as he describes it.

By the 1950s, the house was in a sorry state, but Mulholland, a former head of UK marketing for Irish Distillers, speaks philosophically of the huge challenge that faced him.

“I studied at the Royal Agricultural College in Cirencester and had lived in a large house in England,” he recalls. “I’d been looking after the Belle Isle Estate in Fermanagh for the duke of Abercorn and was involved in its restoration. I had the enormous pleasure of working there with the great interior designer David Hicks.

“Sadly, David died before I started on the work here, but I’d kept all my notes and colour charts and swatches and I very much felt his hand on my shoulder telling me what to do.

“I wanted to make this a comfortable family home. It’s been a long haul but with the completion of Lanyon’s glorious conservatory, the place is looking pretty good. Only the cricket wing remains to be done, but I might just leave that to the next generation.”

Informal photographs around the house bear witness to the fact that family is at the heart of Ballywalter Park today.

While it is in constant demand as a film and television location and a venue for high-level corporate entertaining, formal dinners, small conferences and pre-arranged guided tours, it is essentially the much-loved home of Brian and his Danish food historian wife, Vibse, and Mulholland’s three grown up children Tara, Andrew and William.

Vibse, whose three sons are also frequent visitors, has taken the experience of becoming lady Dunleath very much in her stride. “I can’t tell the difference. It’s just Mrs Bloggs with bells on,” she laughs. “My family, the Lunns, have had an estate and a stud in Knabstrup in Denmark for longer than the Mulhollands have had Ballywalter.

“My father was an army colonel, who fought for the Finns against the Russians in 1939-40. After leaving the army he became a resistance leader and was captured and tortured by the Gestapo. He died when I was eight.”

A qualified technical translator specialising in art and still life, she took a degree in history which led her to a second career. “I developed an expertise in traditional cooking methods and love discovering original recipes and menus. I take personal charge of the catering operation and bring my passion for food to the service we provide. This is not a museum. It’s a home. It’s a nice thing to share it with people,” says Vibse.

For his part, Mulholland sees himself as the custodian of Ballywalter Park. “I certainly don’t see it as an albatross,” he says. It’s a privilege to live here, even if, in this day and age, there are few actual privileges that go with it.”

The third lord Dunleath described Lanyon’s conservatory as “a monstrosity”. Poet John Betjeman, a lover of Victoriana, disagreed and urged Henry, the fourth Baron, to save it. The completion of its restoration in 2009 brought to a close the regeneration of Ballywalter Park.

Among the treasures unearthed during the work on the house was a fine collection of birds preserved by Sheals, the leading taxidermy firm in the North in the 1920s. A set of house menus, dating back more than a century, are regularly used by lady Dunleath to recreate authentic dinner parties from the past.

Ballywalter Park had its own cricket team, captained by the butler. Between 1903 and 1908, a new wing, the cricket wing, was built to house visiting teams. It was so difficult to heat that it was known as Pleurisy Passage.