An architect who was heavily involved in a major restoration of the 18th-century building in the 1980s has criticised the latest update for using arbitrary colours and fake floors, and for removing items 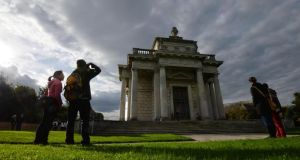 Visitors outside the Casino at Marino, Photograph: Dara Mac Dónaill 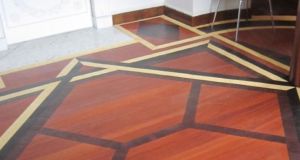 Plastic sheeting that mimics the floor beneath 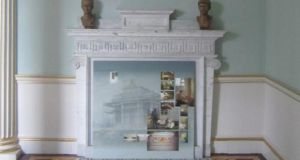 State room in its new colour 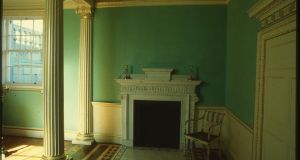 Two of Ireland’s leading conservation architects are at loggerheads over the latest renovation of the perfectly proportioned Casino at Marino, which has long been acknowledged as perhaps our finest neoclassical jewel from the 18th century, which is why it is both a protected structure and a national monument.

On one side is John Redmill, who was involved in a major restoration of the building in the early 1980s, bringing it back as closely as possible to its “probable appearance” in the 1770s, when it was designed by Sir William Chambers for the first Earl of Charlemont, as a respite from his mansion on Rutland (now Parnell) Square.

On the other is John O’Connell, who was commissioned by the Office of Public Works to redecorate the interior, and brought his own creativity to the task. “To me, the building looked very tired,” he says.

“One has to be creative, not dry academic, because we have to present these important architectural spaces to the public.”

In the earlier restoration, great care was taken to get it right. This included an examination of archaeological evidence, Lord Charlemont’s correspondence with his architect as well as paintings and engravings of the period and the advice of a British specialist, Dr Ian Bristow, on paint colours and treatments.

The result, unveiled to the public in 1984, was widely acknowledged as an outstanding achievement by the OPW and an academically rigorous interpretation of Chambers’s fine building, even down to gilding the Ionic columns and frieze of the state bedroom, where Charlemont held court on his day-bed like a Roman emperor.

Now, there isn’t even a bed in the bedroom, while the few disembodied remnants of his original bed are displayed rather bizarrely on the wall of an adjoining dressing room. The 1980s’ green verditer colour, which was based on a fragment of the original discovered by Dr Bristow, has been painted over in a duck-egg blue.

The cost of the Casino’s 1980s’ restoration was enormous, due to the specialist work involved. “Now virtually the whole interior has been repainted using thick modern paints but, worse than that, using incorrect and arbitrary colours, and obviously without any reference to Dr Bristow’s report,” Redmill says.

Inevitably, after 30 years of wear and tear from public use, the interior needed to be freshened up. But what aesthetes find inexplicable is that this should have involved a wholesale departure, in each and every one of the 16 rooms in this “temple of the arts”, from the careful treatment it received in the early 1980s.

‘A kind of assault’

“The whole thing came as a kind of assault,” he said. “It’s very different now, neither one thing nor the other really. In a way, it would be better if it was left totally empty.”

Most disappointingly, the intricate inlaid wooden floors in both the entrance hall and the saloon have been covered with plastic sheeting that crudely mimics the pattern of the originals. Visitors can no longer see these marvellous floors, with their mix of boxwood, walnut, ebony, mahogany and even rarer woods.

The normal practice in historic buildings abroad is to require visitors to wear slippers or plastic booties over their shoes. That’s the way it was in the Casino, until the OPW decided that it raised “issues of hygiene, slipper cleaning costs and compliance”. See-through Perspex or glass also became “scratched and opaque over time”.

Redmill, vice-president of the Irish Georgian Society, is livid. He says that he wrote a critique of the changes and submitted it to the OPW earlier this year. While reluctant to “cause any trouble”, he says the Casino is “far more important than anyone’s personal feelings”.

“The new floor cloth seems at first to be a good idea, but only if it is fitted more professionally and can be turned back to show the floor below to visitors when wanted. But do visitors really want to see plastic replicas of these extraordinary and unique inlaid floors rather than the originals?” he asks.

The OPW concedes that the floor coverings are “not an ideal solution” but says it is “acceptable in the short-term future”, as any of the other options are “problematic in particular for civil ceremonies”. Like some other State-owned historic buildings, the Casino is increasingly used as a wedding venue.

Redmill says the saloon’s ceilings are “too white” and should have been repainted in subdued “broken white”, as Bristow recommended. New LED lighting above the cornices is “far too blue”, giving the wrong direction and colour of light in the historic interiors.

In the adjoining Zodiac room, he notes that red flock wallpaper – based on a fragment dating from a restoration of the Casino by Lord Charlemont’s eldest son in the 1830s – has been “needlessly removed and the walls meaninglessly painted blue”, while the sky blue of its dome has been “inexplicably painted white”.

All of the basement doors were painted in a chocolate brown in the 1980s, as Chambers specified for such doors; it was a cheap “mahogany look” at the time. But these have now been “grained” to look like oak, something that was “not done in the second half of the 18th century, so is not an authentic treatment”.

Redmill also notes that a portrait of Lord Charlemont, placed above the fireplace in the entrance hall, has been removed. The saloon had also lost its expensive moulded and gilded fillet as well as a replica pier table and a “fine 1750 Booker mirror”, while a new decorative mirror hung above the fireplace is “too small”.

In response to queries from The Irish Times, which has led to meetings with Redmill, the OPW says reproduction furniture accumulated over time had been “removed to reduce clutter and allow the architectural spaces to be more fully appreciated”; it was now stored at the OPW furniture depot “pending re-use elsewhere”.

Although it insists there has been “no reverse of the conservation work carried out in the early 1980s”, the OPW says State architect Ciarán O’Connor is now liaising with Redmill to “faithfully follow” paint research and archive records compiled by Dr Bristow for “future paint maintenance work” on the Casino.

John O’Connell is “aware of Bristow’s work”, but has “not used the same paints because we don’t use that sort of paint any more”. He has not read Redmill’s critique, however. “There would be no use in someone like myself reading it because I’ve done my work and would still do exactly the same,” he says.

“Of course, people can criticise it if they wish, but no amount of talking will change anything. I am not in any way apologetic. Everything needed to be brightened up and smartened. If I were to walk James Gandon, Richard Morrison, Harold Leask or Percy le Clerc through the building, I believe they would approve.”

However, it is difficult to avoid concluding that the recent work has diminished the interior. To have it as it is now, with the wrong colours and finishes everywhere, makes a mockery of high standards set by the OPW.

Over the centuries since it was built, the surrounding landscape has drastically changed by Dublin’s expansion, with such encroachments as Marino Crescent, the O’Brien Institute, Nazareth House and housing developments. All the more reason to cherish this unique building and what is left of its setting.