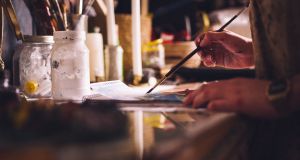 The Arts Council’s plans to change the payment of the cnuas grant, a €17,180 annual stipend paid to 145 of its 246 members, has resulted in a split at Aosdána. Photograph: Istock

One of three members who resigned from the elected committee of Aosdána said she felt she had been unable to put forward her views on the committee about the arts body’s row with the Arts Council.

Artist Vivienne Roche, composer Jane O’Leary and writer Eilís Ní Dhuibhne resigned from the committee, the toscaireacht, over how the group of State-funded artists dealt with the Arts Council’s plans to change the payment of the cnuas grant, a €17,180 annual stipend paid to 145 of its 246 members.

The council’s plans have stirred controversy in the arts world and divided opinion on the organisation’s representative committee.

Aosdána receives €2.7 million a year in public funding, almost all of which goes on cnuas grants. The organisation and the Arts Council have been embroiled in a stand-off over the proposed changes.

Ms Roche said in her March 18th letter that there was one toscaireacht meeting since Aosdána received the council’s draft discussion document in November that proposed changing the definition for those eligible for funding from “full-time practicing artist” to “working artists engaged in productive practice.”

She strongly felt that Aosdána should have accepted an offer of mediation with the Arts Council without prior demands, including a proposal to set aside the council’s discussion document, as a way of settling the dispute.

She argued in a “dissent” document that informed and face-to-face meetings with the Arts Council were “by far the more preferable opening gambit rather than starting with an all-out confrontation”.

In her resignation letter to the committee’s chairwoman Mary FitzGerald, Ms Roche was critical that meetings had not been held on the issue and that she had been “unable to put forward my apparently minority views in the proper forum of toscaireacht meetings, where decisions are also recorded”.

She said that she regretted that the relationship between the toscaireacht and the Arts Council had “deteriorated to a point where even the mediation on the table is in question”.

Correspondence sent by Ms FitzGerald on behalf of toscaireacht “as a majority decision but without holding a meeting to air our views and collectively weigh up the consequences of any actions” was, she said, “an improper and unproductive way to proceed.”

Ms Roche declined to comment on her letter yesterday.